With the exception of Thailand and, to a lesser extent, Indonesia, both of which build vehicles for export, local production in South-East Asia is mainly aimed at local buyers and their appetite for new cars is very dependent on the economic outlook in a very financially volatile part of the world.

In the nine months through to the end of September, total car sales in the six big markets there rose 4% to 2.33m vehicles; according to analysis from Japan’s Nikkei newspaper, Thailand saw sales rise 0.5% in the period, although analysts say consumer confidence could be hit after the country’s revered King Bhumibol Adulyadej, a steadying force in a politically volatile country, died in October.

Indonesia, the region’s biggest light-vehicle market, appears to be back on track after the country recorded six straight months of sales growth to the end of September. A 2% increase on the year before took sales there to 783,470 for the first nine months, according to the country’s local auto trade association, Gaikindo.

So, the outlook in the two biggest countries in the region looks positive, but two smaller car markets are humming along with much more vigour. The Philippines saw sales grow 27% in the first nine months of the year to 293,229, with expectations of hitting 400,000 by the year’s end. The growth of the market has persuaded Hyundai to plan the construction of an assembly plant that will eventually build around 40,000 cars a year to challenge the dominance of Toyota and Mitsubishi.

EcoSport production for the US was going to be in Thailand, but could now move to India

Potential for growthWith a population of around 650m and car ownership well below that of China, South-East Asia remains attractive to carmakers keen to tap into potential growth and build locally. But it remains a tough region to crack for all but the established Japanese brands that continue to dominate – Toyota for example commands around a third of both the Thai and Indonesian market. Honda is the second biggest maker in both.

Ford already builds its Ranger pickup at its Auto Alliance factory, run with Mazda, in Thailand, but late last year the former announced it was spending $186m at its passenger car plant to also build the Ranger alongside the Focus, Fiesta and EcoSport small SUV. Ranger production is for local sales and export to places like Europe, South-East Asia and New Zealand, it said. Ford will eventually dump all but the Ranger, predicts IHS Automotive’s senior analyst for the ASEAN region, Jessada Thongpak. “Passenger car production is very minimal. They produce less than 20,000 EcoSport now. In the very long-term they’ll replace all passenger cars, retaining the pickup,” says Thongpak. The original plan was to export EcoSport to the US from Thailand, but he believes that will now move to India.

That’ll be some comfort to Australia, which saw Ford’s commitment to car building in the country dwindle to a complete closure of its plant there in October 2016 after a 2007 decision to switch the planned Focus production there to Thailand instead.

Peugeot Citroën looks to South-East AsiaAside from a fairly healthy market for German premium cars in the region, supplied in part by local CKD operations, European makers have failed to gain a toe-hold in the region. Thongpak says VW has gone quiet on its plan to build small cars in Thailand under the Eco-Car scheme, while a rumoured plan by the German maker to build a plant in Indonesia has also come to nothing. 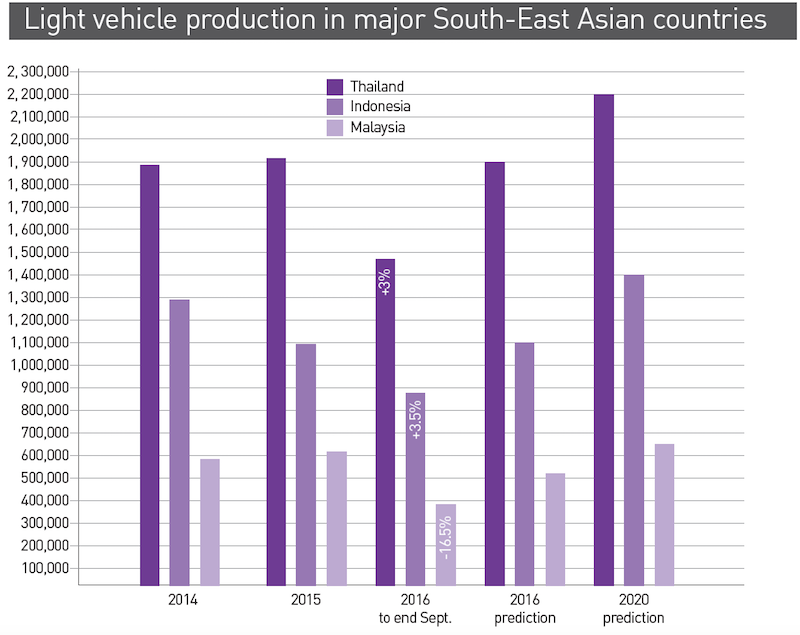 PSA Peugeot Citroën however, remains interested in breaking the Japanese stranglehold. In September, the maker confirmed it was one of three (Renault and Suzuki were the other two) linked with buying struggling Malaysian OEM Proton. Proton, once state-owned and now part of DRB-Hicom, sold around 120,000 cars last year but has manufacturing capacity for 400,000, according to Reuters. Earlier in the month, PSA CEO Carlos Tavares said he wanted to establish a plant in the region – Thailand, Malaysia or Indonesia – with a local partner. PSA also has CKD operations using local firms in Malaysia and Vietnam, but struggles to win over customers. For example, in 2015, PSA sold just 40 cars in Indonesia, down from 65 the year before.

The head of investor relations for the firm that distributes PSA cars in Indonesia was quoted by The Jakarta Post early in November as saying she didn’t think the firm had much of a chance winning over local “brand fanatics” loyal to Japanese makers. It would also have to switch to low-cost MPVs to appeal to local buyers, Tira Ardianti told the newspaper.

In May 2016, Honda officially opened its new 120,000-capacity plant in Thailand with what it called the world’s first moving cell assembly line. Starting production with the Civic and joining its far-bigger plant in the Kingdom, the new plant features what it calls the Assembly Cell Revolution (ACR) line that conveys the workers with the car on moving platforms so they can do a variety of different jobs, rather than sticking to a single job as the car moves past.

Honda claims an increased efficiency of around 10% by eliminating movement among the workers. A team of four workers installs between 10-20 parts in 500 seconds, each supplied by parts collectors walking down the line. The variety makes the workers more versatile, according to a Nikkei report on the production line. The line design means it takes only a short amount of time for the worker to get back to the start.

New plant for IndonesiaThe seven-seat MPVs remain Indonesia’s most popular vehicle by far, but makers are having increasing success with more rugged looking crossover versions that tap into a global trend for SUVs. Mitsubishi, whose sales in South-East Asia eclipse those in its home country of Japan, is building one of the very few factories under construction in the region right now. The $632m plant, situated in Cikarang to the east of the capital Jakarta, will open next April to produce around 80,000 crossovers and SUVs annually. Currently, Mitsubishi only has around 4% of the market share, but hopes to further tap into the crossover boom in which it has already had some success with imports such as the Outlander.

The newish segment, which includes cars like Honda’s BR-V, could add another 50,000-100,000 cars to sales next year, according to Gaikindo, pushing the light vehicle market to a predicted 1.1-1.15m. Another player hoping to cash in is Nissan’s low-cost brand Datsun, which remains a small player. It looks set to bring a more chunky Go Cross version of its Go five and seven-seater next year.

The other big factory being built right now in Indonesia is a plant for China’s largest maker of small commercials and minivans, Wuling. The firm, a partnership between General Motors and Chinese maker SAIC, has said it will compete locally against vehicles such as Daihatsu’s Gran Max range, as well as exporting. Like the Mitsubishi plant, it’s situated near Jakarta and plans to open in 2017.

Chinese make commitment in ThailandThe Wuling plant is China’s biggest automotive commitment in a region that continues to appeal to carmakers there. No Chinese OEM ever rushed headlong into overseas manufacturing, but SAIC is expanding its commitment to build its MG-badged cars in Thailand after breaking ground on a new 700,000 sq.m plant in the kingdom, according to a Bangkok Post report in May. Currently it builds kit versions in a 50,000-capacity factory that is run in partnership with local industrial conglomerate, the Charoen Pokphand Group, but the new plant will have a 300,000-capacity, the paper reported. The plan is to make Thailand a right-hand-drive hub for local and export sales. This coincides with SAIC’s decision to stop its final assembly of MG cars in the UK earlier this year, but neither market has particularly taken to its vehicle range. Thais bought just 3,779 MGs last year.

Opening for EVs?Thailand’s recently announced plan to put 1.2m electric vehicles on the road over the next two decades has brought talk of a local joint venture involving Chinese electric vehicle (EV) specialist BYD, although nothing has been formally announced.

The government’s plan is much like Thailand’s Eco Car scheme to boost small car manufacturing, in that it will offer tax breaks for anyone building EVs in the country with a goal of both cutting local emissions and making Thailand into an EV export hub. EVs built aboard will also avoid import duty in the opening phase.

Plans are still fluid at the moment and IHS’s Thongpak tells of opposition from the country’s dominant makers, Toyota and Honda, neither of who have an EV ready to go. The plan is likely to be amended to include hybrids and plug-in hybrids because of that. In September 2016, both BMW and Mercedes’ parent Daimler announced they would be setting up plants to assembly battery packs for plug-in hybrids in the country.

Motorcycle production continues to sputter in the ASEAN (Association of South-East Asia Nations) region as its largest consumer of two-wheelers, Indonesia, saw demand fall. Last year, production in the region’s most populous country fell 28% to 5.7m, down from a near-record production in 2014 of 7.9m according to figures from the ASEAN Automotive Federation. Last year the pain continued for Indonesia’s bike industry, with another cut of 28% to 2.9m to the end of August. The market is dominated by market leader Honda and second-placed Yamaha, who clocked up sales of 4.5m and 1.8m respectively in 2015. The crash in Indonesia’s fortunes knocked ASEAN’s motorcycle production figures down to 8.7m in 2015 from 11m the previous year, but elsewhere numbers are holding up. Thailand’s production numbers held steady at 1.8m last year, and were down just 2% in the seven months to the end of August 2016. Meanwhile while the Philippines saw production rise 5% to just shy of 800,000 in 2015 and was on course to smash in 2016 with growth of 35% through August to 673,936. Malaysia is the other big motorcycle maker in ASEAN, but saw production fall 17% in 2015 to 345,512. In 2016 numbers steadied to drop just 2% through August. In Vietnam (not part of the ASEAN grouping) makers sold 2.8m motorcycles in 2015, up more than 5% from the year before, according to the Vietnam Association of Motorcycle Manufacturers (VAMM). That was the first increase since 2011.