The plant director has his hands full managing a factory that is running at maximum capacity thanks to demand for the Range Rover Evoque. While its new Chinese sister plant is providing additional capacity, an upcoming model and £200m of recent investment mean Else will soon be busier than ever at Halewood

Nick Gibbs (NG): Halewood has been described as the lead factory for JLR’s recently opened plant at Changshu, China. What does that mean?
Richard Else (RE): We're supporting them. We've moved some people out to China to help with the launch of the factory, and 12 months ago around 50 of their workforce came over for three months to work on our shopfloor to learn about our culture, processes and quality. That was a real success.

NG: Given that China was your biggest export market, how much production will Changshu take out of Halewood?
RE: We don't think it will. It will reduce the number of cars we make for China out of Halewood, but with the demand we have right now, especially with the launch of Discovery Sport, we don’t envisage there being any reduction of volume. China is very much about the growth of our business and delivering really ambitious growth plans for the future.

NG: Last year you said you were sourcing around 50-55% of parts by value from the UK. Has that increased for the Discovery Sport?
RE: It’s probably a similar sort of number.

NG: But you wanted more? Is a higher level achievable?
RE: As the business is growing, we’ve attracted more suppliers to set up nearby. Our seat supplier, Johnson Controls, has just moved from our supplier park to premises a couple of miles down the road because they’ve outgrown their facility. The reason they've run out of space is there's an extra row of seats in the Discovery Sport. In terms of the wider UK, we brought exhaust supplier Faurecia back into the UK, to Litchfield, last year from France.

"We've done more in the last 12-13 years than the Japanese did in the first 20 years of their journey" – Richard Else, JLR

NG: You've previously said that you are targeting the Japanese in terms of productivity. Are you there yet, or thereabouts?
RE: We are on a journey. We’ve copied a lot of the Japanese learning into our operations and business processes. We've done more in the last 12-13 years than the Japanese did in the first 20 years of their journey. We're always trying to catch up, but I'm very confident that we are as efficient as any car plant in the UK. And we'll continue to drive improvements. I'm not going to reveal the man hours per car figure, but we would compare ourselves with the premium segment. We’re very competitive with BMW, Audi and Mercedes in terms of their compact SUV production.

NG: You’ve got a new head of production, Wolfgang Stadler. Has he made any significant changes?
RE: Wolfgang Stadler joined us almost 12 months ago from BMW. He's got a huge amount of experience in manufacturing; he worked for BMW for 30 years in Germany and in South Africa, and he is trying to move us from being a here-and-now manufacturing organisation to one with a big focus on the future, on growth and on efficiency. In 12 months he's made a real difference.

NG: What difference has Stadler made here at Halewood?
RE: Nothing specifically in terms of day-to-day operations, but we're very focused on future strategy now, so I'm spending more of my time away from the plant, looking at the future and what it holds. We have some very ambitious plans and we've got to make sure we've got a very clear map of how we're going to get there.

NG: You’ve said the new robots are flexible to allow more derivatives. How many models could you build here?
RE: We're running at maximum capacity, so we can't build any more. But the opportunity we've now got as we invest in the future is that a lot of the infrastructure is reusable.

NG: If JLR says to you, “Build a new model”, could you create more capacity?
RE: Right now I couldn't. There is space to build and I'm sure we'd get a lot of support to create that infrastructure, but right now we’ve no plans to increase the capacity.

NG: You've stopped making the Freelander, but you do make kits for the plant in India. What will happen to that side of the operation?
RE: The plant will continue to make Freelander kits to the end of year. I'm not going to say what will replace Freelander in India, but we're flexible and we can switch on a car to KD in about six months.

NG: Will you be doing kits for Brazil when the Itatiaia plant, Rio de Janeiro, opens in 2016?
RE: We’ve not announced what models we’re building there, because we've not actually decided yet. Initially it’ll probably be a KD operation.

NG: Describe the journey Halewood has travelled to get to where it is now.
RE: Since it became a JLR plant in 2000, it’s been one of complete transformation. The alternative when it was making the Ford Escort is that it probably would have closed; it didn't have a future. Of all the Ford plants making cars in the UK, this is the only plant that exists today. 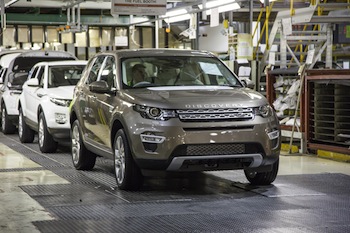 NG: And that's partly down to flexibility with the unions?
RE: Huge flexibility. The relationship we have with them is very constructive. They want to look after the interests of their members, but equally they want to move the business forward. They’ll ask me what they need to do to get future investment into the plant, rather than me asking them.

That relationship has shifted. We’ve now got flexibility to move people around the factory, moving to different shift patterns. They have delivered real transformation. When I came here four years ago there were 1,500 people working here; now it’s 4,750 – three times the number.

NG: Of which aspect of Changshu are you most envious?
RE: Building a factory on a greenfield site is a great opportunity. I can't remember the last assembly plant built for JLR in the UK. A factory built 50 years ago like Halewood was set up a very differently. I would lay the plant out a bit differently. Simple things like, how do you park employees’ cars in the car park? You park them in an arc, so no matter where you park or what time you arrive, your walking distance is exactly the same. Everybody is equal. Our car parks here are nice and rectangular; you park at the back, you have further to walk. You underestimate the impact it has on people.