Having joined the OEM’s Hams Hall team in January 2015, here the plant director discusses the scale of  redevelopment which was recently completed to produce the next generation of Efficient Dynamics engines 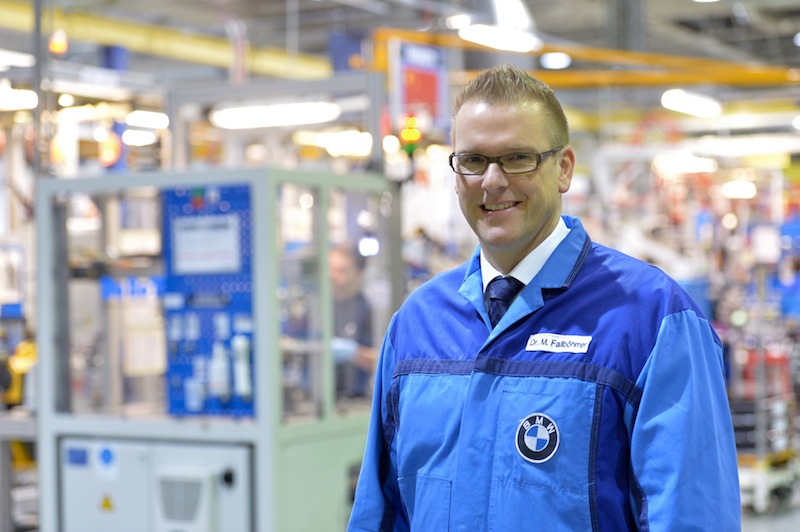 AMS: Before coming to Hams Hall you worked for BMW in Germany. How are your previous experiences informing your actions here?
Markus Fallboehmer (MF): I have had many jobs within BMW which qualify me to take over this role. Before I came to BMW, I was working at the Chair of Manufacturing Technology at the University of Aachen, in Germany, and within that period of time – about five years – I learnt a lot about the newest manufacturing technologies. Coming to BMW, I was working for the powertrain production area exclusively for more than 14 years.

AMS: BMW has invested £750m [$1.1 billion] in the UK as a whole, but what was the investment here at Hams Hall?
MF: You are completely right, we spent round about £750m within the UK. What we haven’t done is broken down the figure; but a bigger portion of the £750m has gone to the Hams Hall plant.

AMS: Can you highlight the key differences between the previous production set-up and what is here now, after the redevelopment?
MF: Previously, we built four-cylinder petrol engines for BMW and Mini vehicles. We machined components too, to supply the engines we built here at Hams Hall. The investment has seen a complete re-development of both our assembly and machining facilities and we are now able to play an increasingly bigger part in the BMW family. We are one of four engine plants [three in Europe, one in China] all producing a common engine family.

The equipment we have now onsite is characterised by a very high flexibility. That means we can produce, for example, three- and four-cylinder petrol engines on one line. Or, if you are looking [at] the machining area, we can produce different engine variants on one machining line. This is the big change between the past and what we are doing currently; we are much more flexible [now] in terms of production.

After ramp-up, the assembly hall will make one engine per minute
AMS: BMW has emphasised that its three-, four- and six-cylinder engines have similar designs, parts and processes of manufacture, so why do you need so much flexibility built into the production equipment itself?
MF: You can imagine that, for example, a three-cylinder block or a six-cylinder block are in terms of size completely different; although there are differences, we are capable of producing these different components on one machining line due to the flexibility we have. You need this flexibility because the overall target is to deal with customer demands, and if [these] are varying and changing somehow, you can easily adapt your production.

AMS: How is the production organised? Is the three-cylinder i8 engine made on a separate line because its production is too difficult to automate?
MF: We are producing mainly three- and four-cylinder petrol engines on our brand-new assembly line, due to the fact that we have a common design of the engines, but some of the [i8] components are different to the engines we are producing on our high-run line, we are producing it on a special assembly line. The i8 engine is more or less hand-built and has a lower degree of automation [in production].

AMS: How many jobs per hour are you achieving for the i8?
MF: We are producing roughly 150 engines per week at the moment.

AMS: How does that compare with the high-volume production?
MF: [Once] we have ramped up our new assembly line, we are capable of producing one engine per minute, or roughly 7,000 engines per week.

"We are now delivering components to our engine plants in Munich and Steyr and this is new for the Hams Hall plant – we haven’t done that before"
– Markus Fallboehmer, BMW

AMS: Is it possible to give an automation percentage for the production?
MF: We have to talk about different sections of the plant. In general, the degree of automation is much higher in the machining area compared to the assembly area. If you are looking [at] the assembly area you can also distinguish between different sections of an assembly line. To give you an example, the short-block line [and] the cylinder-head line [are] more automated than the rest of the assembly line. And this is always derived, of course, from the efficiency and effectiveness point of view.

AMS: What kind of new training was required for workers?
MF: You can imagine if you are doing a large investment in machining equipment that also means you have to enable your complete team to work with these new technologies and the new processes, therefore we set up an intensive qualification programme and spent more than 10,000 days of training [on] the people working in the plant. Some have been re-trained, upskilled, and over 100 people working for us on a temporary basis have received permanent jobs.

AMS: It’s interesting that we have a German company making engines in the UK then supplying them to Germany. What’s the reason for that?
MF: At the moment, around 50% of our engines are exported and the rest will stay within the UK. You always have to take into account the customer demand [which] is driving the volumes in the vehicle plants, and derived from that of course you have to get the right distribution of engines between the engine plants; then you are thinking about what is the most effective and efficient way to produce engines in your production network. We are closely linked to our Mini plant in Oxford and this is our key customer in the BMW network. So most of the engines are going from Hams Hall to Mini Oxford. 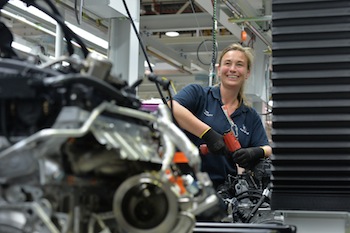 The redevelopment was supported by 10,000 days of training
AMS: When will you be fully ramped up?
MF: You have to distinguish between the machining lines and the assembly area. The machining lines have been installed a little bit earlier than the assembly line. We are still, in both areas, in a ramp-up phase and most probably within the next year we will have ramped up both areas. Just to give you a figure, in the machining area for the first time we will produce over 1m components this year.

AMS: So will you exceed the 2014 output of 226,133 engines?
MF: You have to take into account that this year [2015] has been a big transitional period for us. We installed the new equipment, we set up new machining lines, we set up new assembly lines and now we are in ramp up; so that figure won’t be exceeded this year, but volume will increase going forward.

Hams Hall: Then and now