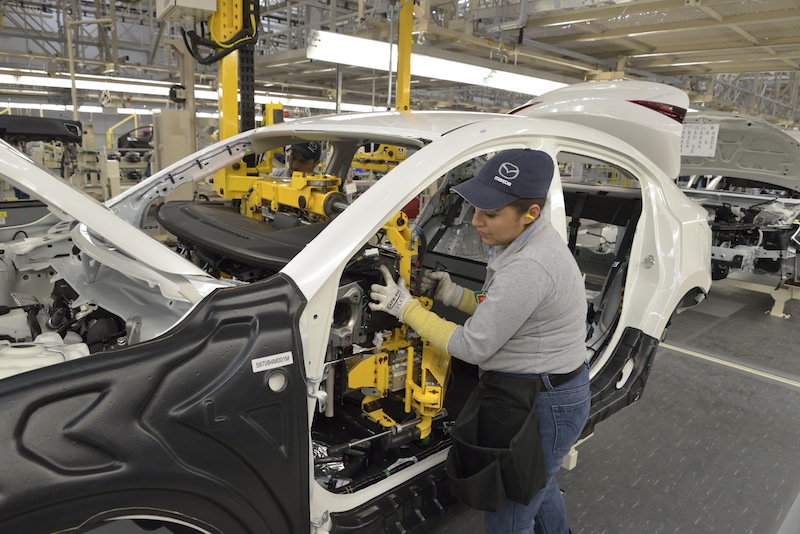 Keishi Egawa, president and CEO, MMVO
AMS: To what extent has the new Salamanca factory been inspired by Mazda’s plants in Japan, and is the level of production technology just as high?
Keishi Egawa (KE): The plant itself uses the most advanced technology within the Mazda organisation in the world. The structure was more or less designed like the plant in the Hiroshima headquarters and from the technology standpoint our model plant would be the one in Nanjing, China. That was the second-newest plant in Mazda. We introduced less automation [than in Japan], particularly in the bodyshop, so that for a future model change we can have more flexibility in the plant, as well as taking advantage of the labour force in Mexico.

AMS: Can you give a percentage for the automation in the bodyshop?
KE: I would say here in Mexico a little less than 50%, whereas in Japan it is 95% or more – almost 100% automation.

AMS: What sustainability measures or systems have been integrated into the factory?
KE: Everything! And in some areas like the stamping shop we have more advanced technology than other Mazda plants, for example we have a better usage ratio of the steel sheet metal. We have a little more than 60% sheet-metal usage here, whereas in Japan [it is] probably around 50% usage.

AMS: What about alternative sources of power or recycling?
KE: Here in Mexico we try to be effective in energy usage. We use solar panels for the lighting in the plant and we have ceiling windows in all [of] the plant from stamping to final [assembly] to take advantage of natural sunlight during the day, so that we can reduce the indoor lighting by probably 30%.

AMS: Why was Salamanca selected as the location for this plant?
KE: First of all, we picked Mexico as a manufacturing country because of the logistical advantage, within the Americas as well as the access to the European countries. And the policy of Mexico is free trade; Mexico has about 45 countries with [which it has] free-trade agreements. 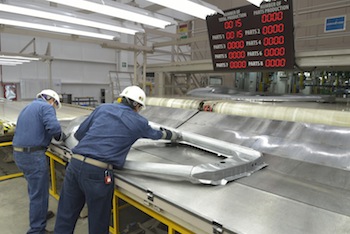 Sheet-metal usage in the press shop at Salamanca is actually higher than at Mazda's Japanese plants
Why Salamanca? Guanajuato is the centre or the heart of Mexico from a geographical standpoint, so we have almost equal access to the west-coast and also the east-coast ports, and equally easy access to the north-south railroad. Also, around this area there hasn’t been so much industry other than the agriculture business, so there is more than sufficient labour available; and generally that labour force is very young, so that we can expect longer employment. The other reason was that the state government was very aggressive in inviting foreign capital to the state, to promote industrialisation. We didn’t have any difficulties to come into this place.

AMS: What challenges did you encounter when establishing the factory?
KE: The biggest challenge would be how we develop the people within the company. Generally, there is no background of manufacturing or the automotive industry here. We had to start from scratch. So first of all we need to educate the people [about] how they should work and how they should manufacture an automobile, and then we should train them and keep training them in order to improve their skills.

We call it KET: knowledge, education, training. First of all, we teach them knowledge about the manufacturing business and the automobile business, and then how to make the cars. We need to teach them and get them trained so that they can do the job in the right manner, with variations. So we use the KET process for all employees and visualise the person’s progress within the education and training process.

AMS: So you literally turned farmers into operators?
KE: In a sense, yes. [In] our very first stage, before we started production, we sent approximately 180 people to Japan to teach them the automobile manufacturing business and the Mazda manufacturing philosophy so that they know what Mazda is trying to do, more or less in a six-month period. And then they came back here and became teachers to the rest of the Mexican people. And even after we started mass production we put a programme in place to send more Mexican people to Japan to keep learning how the Mazda production system advances and makes progress in the future.

AMS: How important is Salamanca within Mazda’s global production strategy?
KE: Well, the rest of Mazda’s production facilities are located in Asia: Japan, China, Thailand and some of the other knock-down – CKD – assembly plants within Asian countries. Within the Americas, this is the only manufacturing facility, so from a geographical standpoint this Mexico plant is really critical to Mazda. 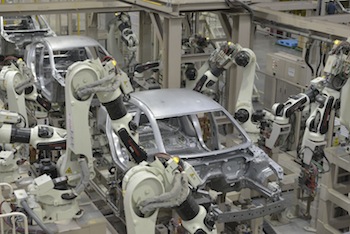 AMS: When do you expect to reach maximum capacity?
KE: I think from next year – our fiscal year starts [in] April – on a full-year basis, or more precisely once we finish the Toyota vehicle launch this month [Mazda Salamanca started making the Yaris R in June], the second half of this year will be very close to the maximum production.

AMS: How long do you expect to be producing these Toyota vehicles, given that the OEM is establishing its own plant in Guanajuato which will open in 2019?
KE: I hope that the production will continue but neither we nor Toyota will discuss the future product plan. One thing Toyota said in their announcement [is that] they want to produce the Corolla-level vehicle in their own plant starting from 2017, and the Toyota vehicle here is smaller, around the size of the Mazda 2.

AMS: So the factory was designed from the start to produce both the Mazda2 and Mazda3?
KE: Yes.

AMS: Can you give a percentage for the local content being used in these vehicles?
KE: We are a little more than 50% of the requirement within NAFTA. The calculation method is different country by country so it can’t be compared within a single standard. For NAFTA purposes, within five years from the initial mass production we need to raise the content from 50 to 62.5%. We already have a way to achieve it, so that’s only a matter of time.

AMS: Is it a question of developing relationships with the suppliers? How will you achieve that goal?
KE: Currently, the rest of the 50% comes from Japan or the rest of the world. The main chunk of it is from Japan, so suppliers currently using a plant in Japan may change to the US or Mexico; same supplier but different manufacturing location, so that we can increase our local content. Or, we can find totally new suppliers in Mexico, or in the United States or Canada. We know how we are going to do that within the five-year time range so that we can achieve 62.5% local content.

AMS: Do you envisage this factory producing other models in future?
KE: We are not in a position to discuss future product. It is possible, but I don’t have a plan to tell people outside Mazda! The factory itself is capable.

As Mazda’s first independent production site in North America, there is no little importance attached to the new factory at Salamanca, in the state of Guanajuato. Not only is the company keen to take a slice of the US market, like other OEMs, but to rebalance a manufacturing footprint which is at present so strongly skewed toward the east that Mazda has only two other non-Asian factories – in southern Africa. When running at full capacity, the Salamanca plant should lift the OEM’s overseas production from 30% closer to 50% of the total.

The sole plant of Mazda de México Vehicle Operation (MMVO), a 70:30 joint venture between Mazda and Sumitomo established in 2011, the 256-hectare Salamanca complex consists of a stamping facility, bodyshop, paintshop, assembly hall and engine machining shop, plus an adjoining supplier park of three companies supplying seats, plastic components such as bumpers and instruments panels, and non-body sheet-metal parts. Mazda now has 111 suppliers in Mexico, including many in the developing automotive hub of Guanajuato that were already serving other OEMs, such as GM in Leon. 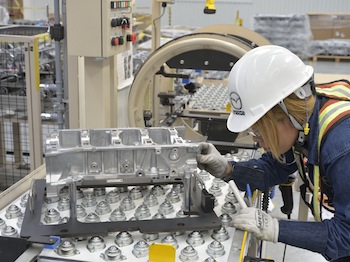 An onsite engine shop has replaced imports from Japan
The planned investment was $500m, but this grew to $650m to expand the capacity from 140,000 to 230,000 units per year by March 2016, then $770m with the addition of an engine machining facility which commenced operations in October 2014. The factory started turning out Mazda3 sedans and hatchbacks in January 2014 and introduced the Mazda2 hatchback in October 2014, when a capacity increase to 250,000 units was announced.

Since June this year, the factory has also been producing the Toyota Yaris R, which is similar in build to the Mazda models; Toyota is constructing its own factory in Guanajuato, due to open in 2019, to make the Corolla. Mazda Salamanca reached the 100,000-unit production milestone in December 2014, less than one year after launch, and is currently producing almost 1,000 vehicles per day.

As an upcoming rather than fully industrialised region, Guanajuato provided Mazda with a plentiful workforce – but one which required training from scratch. Initially, 180 MMVO engineers and production workers were sent for instruction at the Ujina and Hofu plants in Japan, so that they could educate their colleagues upon their return. The training programme continues, and indeed 15 Mexicans were recently promoted to management level at Salamanca. The workforce of 5,000 will rise to 5,200 by March 2016, when ramp-up is completed.

The skills of the workforce are understandably important at a plant with a relatively low level of automation; in the bodyshop, where there are just 140 robots (from Fanuc), it is less than 50% – compared with almost 100% at Mazda’s Japanese plants. However, in one respect, Salamanca outperforms its counterparts. The IHI presses in the stamping facility can achieve a sheet-metal usage of 60%, around 10% more than in Japan. Multi-press technology also enables the simultaneous production of several body panels.

In the 74,000 sq.m assembly hall, the two Mazda models and one Toyota vehicle run down the same line in a mixed sequence, arriving from the paintshop by overhead conveyor. The engines are produced onsite in the adjacent engine shop, where a high-precision machining line supplies cylinder blocks and heads to an assembly line – an operation which has replaced imports from Japan.

There is some use of kitting via lineside trolleys plus boxes which travel with each vehicle, as well as ergonomic lifting devices to assist the 1,555 workers, but also ‘fixers’ to raise the car bodies on the conveyor and so accommodate the relatively small height of the average Mexican employee (30% of the workforce is also female). The employees wear differently coloured, Mazda-branded baseball caps as a visual management aid; blue for an operator, yellow for a supervisor and orange for an assistant foreman. 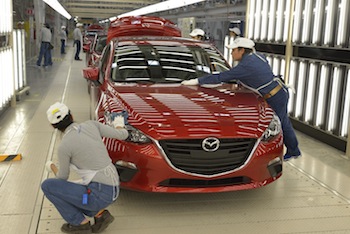 Salamanca is turning out the Mazda2 and Mazda 3 but also a Toyota model, all assembled on the same line
In assembly, there are 134 workstations and 22 quality gates to check the fit of the components. According to the assembly hall manager, Luis Elizondo, the operation follows the ‘100 minus one’ philosophy which was instilled in the workforce by MMVO president Keishi Egawa. According to this way of thinking, 100 minus one is not 99 but zero, because although one fault out of 100 is a small proportion of the total, one faulty product is of overwhelming importance to the customer who experiences it.

Salamanca’s output departs the factory by trailer or the nearby railway, with only 14% serving the local market. The rest is exported, mainly to the US and Canada (49%), Europe (39%), and Central and South America (12%). However, the Mazda2, which is smaller than the Mazda3, is not exported to North American countries; the export pattern of the Toyota vehicle is still being established.