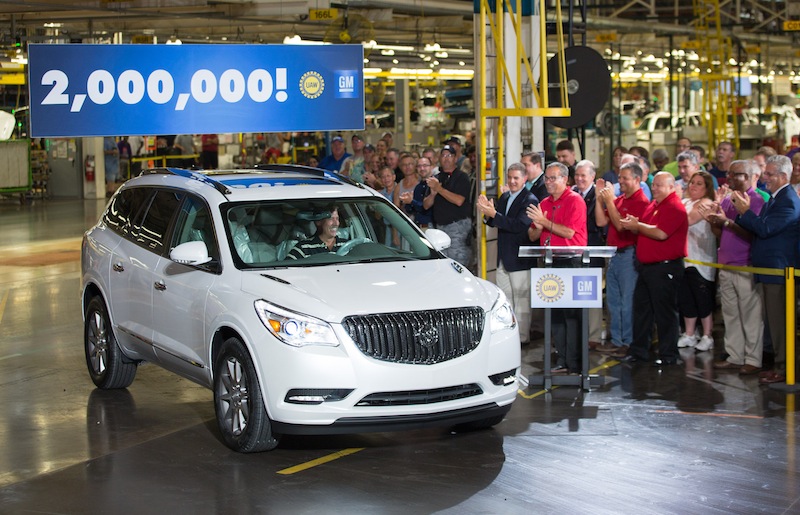 Mike Trevorrow, regional plant manager, GM Lansing
AMS: How important is Lansing Delta Township within GM’s North American production network?
Mike Trevorrow (MT): We’re pretty important, I think. In today’s market, at least in North America, crossovers – the vehicles that we build here – are pretty popular. We make the Buick Enclave, the Chevy Traverse and the GMC Acadia. All three products have been in existence for about seven years, so kind of late in their lifecycle, but at the same time the sales on them are continuing to increase. So, bottom line for our company: it’s an important product for us. We’re on three shifts, we work five days a week, minimum, and lots of over time right now because of the demand for the vehicle.

AMS: As the newest plant in that network, what advantages does it have for manufacturing in a modern and efficient way, for example in terms of layout and infrastructure?
MT: I think that’s one of the big ones: it was a greenfield [site], so as the facilities were built and laid out there was a lot of innovative thought put into it, and for our general assembly process we have a lot of suppliers within a ten-mile radius of the plant and we take advantage of that with where we’ve positioned docks. We have a very low amount of material on the floor; we’re operating in windows of a couple of hours of material on the floor.

AMS: Which geographic markets is this plant serving?
MT: Primarily the US. We do export some to China and the Middle East.

AMS: So a minority is exported, for example 10%?
MT: We’re talking less than 10%. We’d be open to shipping more out! But the demand is inside the US. We typically measure things in 90-day supplies for the outside and we’re well below that on all three of these vehicles.

AMS: Do you have a supplier park?
MT: There’s not an official supplier park but within five miles of this plant there’s more than a dozen [suppliers].

AMS: I guess that’s one of the advantages of this location; you’ve got lots of space for the suppliers to come nearby. It’s a good situation to be in.
MT: I think for the suppliers it was an even better situation, when you think of Lansing Grand River [GM’s other plant in the area] just being within seven miles, so [with] the risk of a supplier locating close to a factory, they got to locate between two factories and they can offset their risk.

AMS: The plant is making vehicles for three different brands, but all of them are SUVs [on the Lambda platform]. Does this mean they can be made in the same areas within the plant? Are they sequenced? How does it work?
MT: We build all three at the same time. We can mix and match them; if Buicks are more in demand than GMCs we can alter the mix. To us, they build the same way, but they are completely different exterior parts and many interior parts are different on the vehicles as well but they do get loaded and installed in the same stations.

AMS: What effect does it have on the robots? Do you have to programme them for each vehicle?
MT: Many of those cells in the bodyshop are building in sequence, so you’ll see fenders being produced for the Enclave, the GMC and the Chevy, and the robots just go and do different pick locations. As for GA [general assembly], the presentation is the same. In most cases we try to engineer it so that we assemble them the same way: attach points, the same bolts, the same locating strategies. So even though the part might be completely different, visually it gets installed the same way in all three vehicles.

AMS: What was the overall purpose of the $63m investment that was announced at the end of last year? Was it focused on the launch of a particular vehicle?
MT: It’s really in preparation for the next vehicle launch.

AMS: Can you say what that is?
MT: I can’t! What’s been done so far is the new buildings, the additions onto the facility. The majority of the investment is what goes inside the buildings and we are just in the process of putting those things in place. [On top of $63m for the building expansion, $520m will be spent on equipment.]

“We’ll take advantage of newer technologies in regard to joining of materials”
– Mike Trevorrow, GM

AMS: Can you give any details or examples of those next-generation robots and the lean, flexible tooling?
MT: The difference between what we have today and what’s going to go in is the advance in the technologies. So robots now can be smaller, cheaper, faster and lift the same weight, so we’ll take advantage of those kinds of things.

We’ll take advantage of newer technologies in regard to joining of materials. Predominantly, this [current] vehicle is welded together, because [it is] mostly of different types of steels. The next vehicles probably will be experiencing more mixed materials; there will be potential for more aluminium, potential for other kinds of structural materials. As a result of that, you need different joining techniques. So today we do predominantly spot welding and in future other technologies [will be] required. It could be flow-drill screws, self-piercing rivets, it could be adhesives, it could be laser welding... 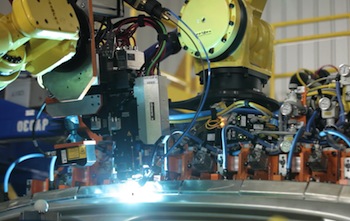 The new bodyshop at GM LDT will feature mixed-material joining technology, similar to CT6 production at Detroit-Hamtramck
AMS: When will the work be complete?
MT: Typically it takes us about 18 months to build buildings and install new equipment. I can’t give you an exact date but I can tell you we’re probably still in that range.

AMS: Do you have, or do you plan to introduce, any alternative sources of power?
MT: We’re not really located close enough to a dump site to take advantage of the gas like we do at Orion [Michigan] and some of our other facilities. Wind power – right now that’s not on the books for us. So there is no innovation for us right now in regards to energy sources.

It’s really [about] proximity to the gas – methane. If we’re within a five-mile radius of a landfill, we’ve taken great measures to take advantage of that – Fort Wayne [Indiana] and Orion are two that I know of personally. At many of our locations we’ve [also] taken advantage of solar. We’ve given up portions of space – which is an opportunity that we have here – and either put [the arrays] on the ground or on roofs.