The OEM's head of Manufacturing, Supply Chain Management and Purchasing in Europe denies rumours of outsourcing at its underutilised EV battery plant in Sunderland; Nissan's destiny remains in its own hands 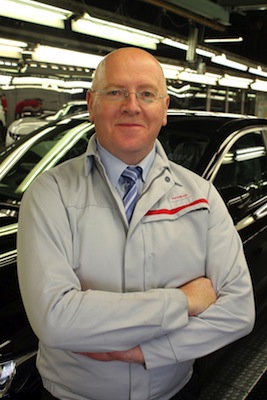 Nick Gibbs (NG): Will you localise suppliers for the batteries?
Colin Lawther (CL): No. The [Japanese] production facility for the electrodes we have in alliance with NEC was quite expensive and that supplies Japan, UK and the US. Electrodes pack down tightly in coils so it’s not hugely expensive to ship around the world. The other key component is the electrolyte, and that is localised in Teesport about 60km away.

NG: A recent report said that Nissan now wants to outsource battery production, or get a battery supplier to run the plants. Is there anything in that?
CL: Nissan was first into EVs and at the time we wanted to make sure we had a secure battery supply. Clearly, he who controls the batteries controls the world, from an EV point of view. [Renault-Nissan CEO] Carlos Ghosn said even though batteries weren’t a core business, we should learn how to make them to understand the technology and have it in our own hands.

We are now in a position where we are self-sufficient on batteries and we have a safe, reliable business supplying Leaf vehicles. Destiny is now in our hands. Whether we change that in future or not is certainly not decided. There are no plans to sell off or outsource or anything. In the future, who knows?

NG: How difficult has it been to find trained staff to work at the battery plant?
CL: When we set the plant up originally, we seconded a lot of maintenance engineers from the vehicle plant. We thought it would be a pretty automated and high-speed production facility, so the bodyshop engineering team in Japan took the lead. We started with a group of people who were bodyshop engineers and maintenance staff and recruited some chemical and electrical specialists from outside. For manufacturing, we managed to recruit people reasonably easily. It wasn’t as difficult as we expected it to be; there was a lot of synergy with the vehicle plant.

"We are now in a position where we are self-sufficient on batteries and we have a safe, reliable business supplying Leaf vehicles. Destiny is now in our hands"
– Colin Lawther, Nissan NG: The equipment looks incredibly complex. Was it something Nissan had to build in-house?
CL: All the equipment is designed and manufactured by Nissan. Some of that is made under licence to Nissan in Japan, Korea or China. Most of the proprietary equipment such as body handling conveyors, magazine racks or ovens – this type of facility was bought in Europe. On a cost basis it’s about 50/50.

NG: On the tour, we weren’t allowed to see some of the plant. How unique is this equipment?
CL: Nissan took a lot of tech from other industries. Making the cells involves stacking very thin film of anode and cathode material, so a lot of that tech came from the printing industry, where you’ve got very high speed and accuracy. We disassembled a lot of batteries to see how they were made, looked at a lot of assembly equipment, then made our own, basically. The really confidential facility was the bespoke technology that Nissan designed and developed.

NG: How much cost saving did you achieve by moving battery production from Japan to the UK in 2013?
CL: We wanted to build close to Leaf production because it gives you a very short supply chain and the lowest inventory. Batteries are expensive; if you had to have six weeks’ worth of inventory on the water from Japan that’s a lot money tied up moving a lot of weight. It’s not so much the absolute cost. The cost is almost exactly the same to make the same pack in Japan or the US.

NG: Currently you’re running under the capacity of 63,000 units. You’re selling around 12,000 Leafs a year in Europe and the eNV200 van will be even fewer. For how long can you run this far below capacity?
CL: It’s a modular capacity, we have a number of different production lines, each are running under a one-, two-, three-shift basis. One of the lines is mothballed; if needed, we’ll bring it back. We’ve already supplied more than 2,000 batteries to Spain for the eNV200, and exported some 600 vans back to Japan. Year-on-year, we’re selling more and more Leafs, so we’re more or less where we expected to be.

NG: Moving on to the Sunderland vehicle plant, what will the numbers be for 2014?
CL: We did around half a million last year [2013] and we’ll be doing around the same again this year.

NG: You’ve said previously that capacity is 550,000. Won’t the 2015 Infiniti Q30 C-segment car push you over capacity?
CL: We’re currently running on a three-shift, two-shift basis [for Line 1 and Line 2]. Moving to three-shift, three-shift, we’ll have more than enough capacity to meet demand next year [2015]. Both lines can manage 300,000 each, so that’s 600,000. It’s more than enough to deal with the success of Infiniti, which will launch towards the end of next year.

NG: Will you make the planned Infiniti QX30 small crossover?
CL: For The Q30, we’ll make 60,000 approximately. The market will tell us how many we need. Any other derivatives we haven’t announced yet, but we’ve got a 60,000-car capacity for Infiniti. You do the numbers.