Injecting a dash of insulation 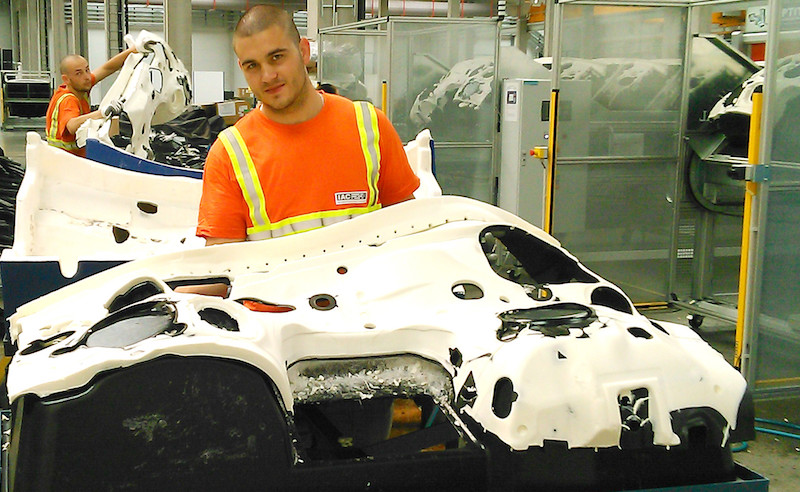 IAC's newest production facility, at Prestice in the Czech Republic, will initially be producing the company’s injection moulded inner dash, acoustical insulation product for two major vehicle OEM customers – including trunk trim and dash insulation components for the 2016 European Car of the Year, the Opel Astra. however, plans are already in place for the start of a major door trim production programme that will see the plant ramp up to full capacity in 2018.

Marcus Nyman, senior vice-president of IAC’s Cockpit and Overhead Systems business unit, says the 18,000 sq.m facility went from concept to start of production in just eight months. He indicates that a key factor in achieving this compressed timescale was that the new plant replicates an established global set of operational principles and procedures. “IAC operates all of its plants according to the IAC Production System (IPS), which is a lean and integrated process aimed at achieving continuous improvement in all aspects of the business,” he states.

Meanwhile, another important element in the equation, implicit the plant’s formal title, is that it was able to draw on a local resource of labour that was familiar with the company’s way of working, since it is situated just 2km away from the existing Prestice 1 facility, which is the company’s ‘European Centre of Excellence for Overhead Products’.

Accessing a skilled workforceNyman confirms that the close proximity of the two sites is not merely coincidence. “Prestice has an extremely skilled workforce [that has been] ensuring quality and delivery performance on overhead products for decades,” he states. “IAC is the main employer in Prestice, which enables the company to successfully tap into the qualified workforce based in the region while sharing the overheads between the two sites.”

"IAC operates all of its plants according to the IAC Production System, which is a lean and integrated process aimed at achieving continuous improvement in all aspects of the business" - Marcus Nyman, IAC

Currently, Nyman confirms, about 80 people are employed at the new facility, though that figure is expected to rise to around 450 as all projected manufacturing programmes kick in. He says that IAC does not disclose the details of investments, but that it spent “several million US dollars” for the greenfield site on which Prestice 2 now stands. He makes a point of adding that his expenditure follows recent European manufacturing extensions in the UK and also the recent start of operations at the company’s first ever South American plant at Itatiaia in Brazil.

The Prestice 2 site produces IAC’s injection-moulded dash inner, which the company says provides an estimated 40% weight reduction compared to a conventional vacuum-formed product. According to Nyman, the process ensures exact, reliable forming of lighter inner dash insulation without any compromise to acoustic performance, and it also delivers more precise mass distribution to match the acoustic hotspots within the component. “At the moment there are three programmes running for injection-moulded inner dash insulation,” says Nyman. “Additionally, Prestice 2 produces the trunk trim parts for the Opel Corsa.” He adds that an “upcoming door programme will be a major platform supporting several variants and derivatives.”

Nyman says that conventional dash insulation parts are vacuum-formed and that in that process a thermoplastic-based heavy layer sheet is moulded in a tool under vacuum. However, as he further explains, this process has some intrinsic limitations: “The thickness of the part is nearly uniform and a detailed, precise part geometry is difficult to reproduce.”

In contrast, by replacing vacuum forming with injection moulding, using what Nyman describes as “a customised compound with adjusted mechanical, acoustical and rheological properties”, IAC can produce parts that are much more closely targeted to requirements. Quite simply, they are “thicker where more insulation is needed – the so called acoustic hotspots – and thinner where less insulation is required.”

Consequently, the process can simultaneously optimise the acoustic performance of the parts it produces while also reducing their weight. Moreover, says Nyman, doing so does not require any special equipment. “The injection moulding process takes place in standard machines so that the operators can introduce the new technology quickly and flawlessly,” he states.

For the moment Nyman will not be drawn on how the new Prestice 2 facility will develop in the future.

“In agreement with its customers, IAC does not disclose details of its current and future programmes for Prestice 2.” Nevertheless he does indicate that the site is likely to figure significantly in the company’s wider European operations: “The IAC Prestice 2 site is well located to service the central European OEMs in Germany and the Czech Republic, as well in the UK, as far as overhead products are concerned.”

Just two months before the opening of the Prestice 2 plant, IAC also took its first ever step into carrying out actual production in South America when operations began at another new facility – in this case at Itatiaia in Brazil. At 4,500 sq.m the plant is relatively small and currently employs just 17 people, though that figure will eventually rise to 40-50. It does so in the assembly of cockpits for delivery to Jaguar Land Rover do Brasil to support production of the 2017 Discovery Sport and Range Rover Evoque SUVs.

The plant is, in effect, a final assembly facility for cockpit components provided by five of the company’s UK facilities in Halewood, Elmdon, Sunderland, Scunthorpe and Coleshill. IAC indicates that the whole process of setting up the new plant took just six months from initial work at the site to the start of deliveries to JLR. “Our presence in Brazil allows us to be a reliable strategic partner to Jaguar Land Rover’s global expansion and successfully support the lean operations of this important customer,” says the supplier’s chief operating officer, Brian Pour.