A £20m, collaborative venture in the UK seeks to innovate, develop and manufacture diverse automotive components; AMS took a look around The Proving Factory's newly opened assembly facility in Coventry 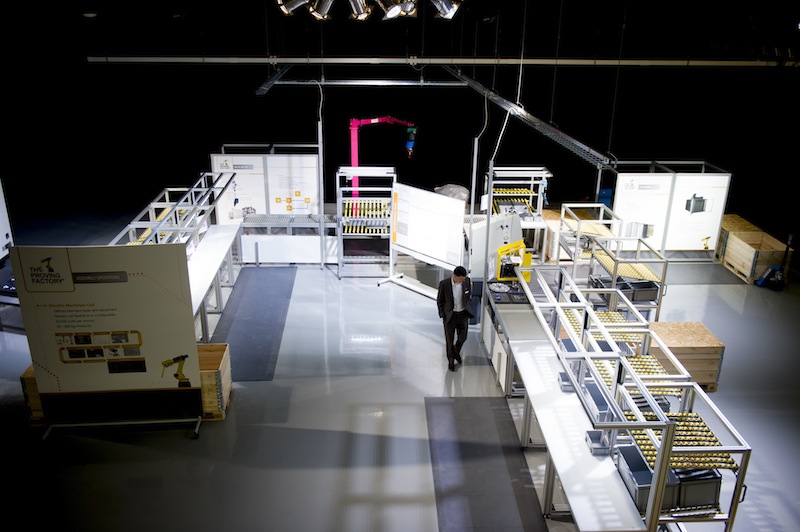 Creating a tier one automotive supplier from scratch in just a couple of years sounds like a tough task already, but try adding a few more complicating factors: firstly, that it will make not just one product or product family but perhaps up to 20 devices from different design sources; secondly, that those devices will be highly innovative products originating from small companies and intended to support a shift to low-carbon vehicles in the mainstream industry.

That is the business plan, and from now on increasingly the reality, of The Proving Factory, a £20m venture formally launched in early 2013 to develop product ideas from small UK companies and then manufacture them in quantities – probably around 20,000 units a year – that might either interest an established tier one supplier in taking over production or enable the original technology developer to go it alone. Indeed, as chief executive Richard Bruges comments, ultimately “the entire business is about getting companies out of the door” as much as it is about doing the same for products.

Bruges made the remark in February this year at the opening of The Proving Factory’s assembly facility on the outskirts of Coventry, in the traditional heartland of the UK automotive industry. The initiative has teamed up with a manufacturing facility in Rotherham, South Yorkshire, that started operations in October last year, and together they constitute an automotive manufacturing venture that is quite possibly unique in the world.

But how does an operation organise itself to explore such uncharted territory? One thing it does not do is regard itself as simply a machining shop with a particularly varied product portfolio. Head of operations for component manufacturing at Rotherham, Nick Andrew, emphasises that the organisation instead has to combine its manufacturing processes with an initial period of product development to optimise them for the best chance of commercial success.

A flexible Factory
The Rotherham facility comprises a 1,000 sq.m temperature-controlled space with four major items of production equipment: a couple of machining centres, a universal grinding machine and a milling machine, plus appropriate coordinate measurement equipment. Andrew says this set-up provides considerable flexibility and allows, for instance, “mill-turn type” operations and also the machining of gears and splines.

The flexibility of the operation needs to accommodate highly variable levels of both production volumes and product design maturity. This is because it will have to cope simultaneously with both the high-volume manufacture of parts for OEM customers and prototyping operations for products that are still in development – not an initial phase but a continuing situation, as an essential aim of the venture is that there should be a constant throughput of new technology developers and products.

The manufacturing operations will involve a fairly challenging range of components, including casings, shafts, impellers, bearing housings and gears. The materials will be predominantly steel but also nickel alloys and aluminium, and eventually titanium alloys. Cast iron is unlikely to feature because of the damage its swarf can cause to the coolant filtration systems of the machine tools.

Before any manufacturing begins, all products will be subjected to an intensive period of analysis and refinement to optimise them for volume production. Andrew explains that for the first half dozen products, the technology developers brought to a series of design review sessions a set of prototype parts, a CAD file and a bill of materials; material choices, plus parts manufacturing and assembly procedures were scrutinised. A common practice amongst small companies with prototypes, he observes, is to over-specify material selection in order to ensure that the product is sufficiently robust – something that would have negative cost implications if carried through to production.

"We looked around but could not find anything else like it"
– Nick Andrew, The Proving Factory

Building up suppliers
Therefore, another key attribute of the Proving Factory concept is that the central organisation will organise an appropriate supply chain. Given that one of the partners in the venture is material supplier Tata Steel Speciality Steels, the capability is effectively built in from the start. This application of design enhancement and manufacturing to a series of disparate products from different sources means that The Proving Factory has essentially invented its own business model. When the initial planning for the venture took place, says Andrew, “we looked around but could not find anything else like it”.

One aspect of the design review process that Andrew stresses is that each product was assessed independently of the others; there was no attempt to homogenise parts and materials, though a degree of commonality naturally emerged because the basic principles tend to be similar. For instance, all of the products have rotating shafts. Nor was there any attempt to fit them to a particular set of manufacturing capabilities. “We had no idea what machines we would get before we carried out the design review,” he confirms.

Those machines are already hard at work. In early 2015, the Rotherham facility was running five shifts a week with a lead time of five weeks. Moreover, its dozen managers and machine operators are already outnumbered by the apprentices recruited to ensure a supply of skilled personnel as the operation continues to grow; at the moment, there are eight apprentices in their second year and five in their first.

The Coventry facility has got up and running later than its counterpart in Rotherham but the former will be the front-end of the whole enterprise as far as the wider world is concerned. According to head of operations Simon Danks, “We will be the site that takes the orders from the OEMs and so we will also need to establish the relationship with the technology developers from very early on.”

Realising each innovation
A very important resource at Coventry is a simple-looking room just off the side of the main assembly area which is known as the ‘product realisation centre’. Danks explains that this is where the assembly process for a particular product will be developed so that it achieves enough reliability and efficiency for volume production. As he points out, the technology developers themselves are likely to have carried out only “bench-level” assembly of a handful of prototypes. This will involve collaboration between Proving Factory personnel and the technology developers: “We like to have their people in there with us so that we learn about what they have encountered as process issues."

This approach will continue as the innovations move into production. Danks says that four members of the technology developer that is pioneering production have been issued with passes to access the building on an equal basis with Proving Factory employees. “We have designed collaborative working space into the building,” he explains. Since the developers themselves do not necessarily have previous experience of the automotive industry, it is important that many of the Proving Factory personnel do so. Danks himself has previously worked for automotive pump manufacturer Concentric as well as the Society of Motor Manufacturers and Traders (SMMT). 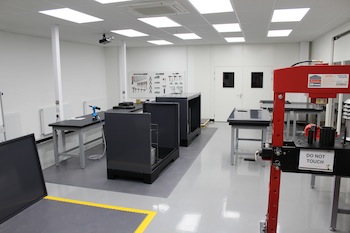 The main operational area at Coventry will eventually consist of a series of assembly cells, each devoted to a small number of products which share fundamental technological features. The number of both cells and products will depend on demand and the number of technology developers with products that have progressed through to manufacturing. Once the initiative is fully operational, it could feasibly run into double figures at any one time, though at the moment three technology developers are acknowledged to be further ahead than the rest.

These are: Bladon Jets, which has developed a micro gas turbine engine that could serve as a range extender for electric vehicles, though it might well make its first impact as a power generation device in Third World countries; Flybrid Automotive, which has a flywheel-based kinetic energy recovery system; and Magnomatics, with a continuously variable magnetic transmission system called Magsplit, plus an electric motor concept. David Latimer, CEO of Magnomatics, describes the “design-for-manufacturing feedback” that the company has received as “very powerful”, saying it has helped to establish contact with three OEMs.

However, Danks concedes that volumes at The Proving Factory will never in themselves justify significant investment in automated assembly equipment and so, in contrast with many tier one suppliers, manual processes are likely to predominate. Nevertheless, he says automation will be an option where it will serve to “protect the process”, for instance in handling magnetic components that might be impaired by manual procedures or where very high, repeatable accuracy is required.

Another obvious contrast with wider industry practice will be the sheer range of different products assembled at Coventry. This is not merely unavoidable but intrinsic to the whole enterprise, so it imposes a requirement to identify as far as possible key technologies likely to pervade the product range. One such will be coil winding. “We have to decide whether to buy in ready-made coils or set up our in-house capability,” states Danks.

Progress in the pipeline
In general, Danks believes the facility will certainly need significant in-house engineering resources. Hence the fact that, as the organisation looks to boost its complement of 26 staff, the emphasis on recruitment throughout this year will be on bringing in “graduate-level” newcomers. 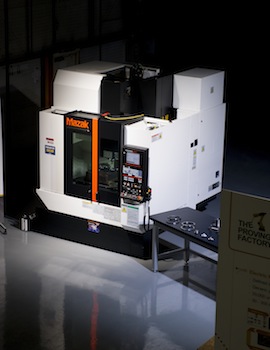 The facility is also working towards both the ISO9001 quality and ISO14001 environmental standards as an “integrated” parallel exercise, according to quality manager Julie Howe, whose own previous automotive experience was with Aston Martin. She acknowledges that two factors make the Coventry facility atypical. The first is simply that it is “starting from scratch”; the second is that each of the intended assembly cells will be making quite distinct products. Achieving uniform quality levels across a wide range of separate products, she says, will involve setting the same sort of objectives and methods of measurement across the different cells. “There are standard metrics,” she explains, citing defect and rework rates as examples.

For the moment, though, only one assembly cell is in operation. This will remain the situation for the rest of 2015, but Danks suggests the number will double or triple during 2016. Meanwhile, the process of building a supply chain is very much underway. According to Richard Bruges, around 200 companies in the UK have been contacted and the first supplier audits have already taken place. He says that, once the whole initiative is fully operational, perhaps 10-20% of the suppliers might be new to the automotive industry.

It looks as though The Proving Factory might help not only to deliver to the market a series of innovative and energy-efficient new products but also to stimulate the creation of new resources back down the supply chain, in a way that could have implications for the wider automotive industry.