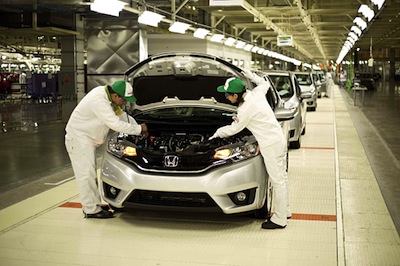 In the last couple of years, Honda has expanded its operations outside Japan, especially in NAFTA, South-East Asia and Brazil. The company reported record production volumes outside Japan for the year to March 2014, with the nearly 3.47m vehicles built representing a rise of 9%; there were production records, too, in North America and Asia. Production in China rose 39% to just over 830,000 units. The record figures for fiscal year 2014 followed on from record figures for calendar year 2013, when Honda produced just under 3.46m vehicles outside Japan, out of a total of nearly 4.3m worldwide – also a record. Europe, however, is a problem area for the company, with production falling by nearly 22% in fiscal year 2014 to just under 134,000 units. In particular, Honda has utilisation problems at its plant in Swindon, UK.

Looking at Honda’s growth outside Japan, the company has recently commenced production at a new factory in Celaya, its second Mexican vehicle assembly plant. The other is at El Salto, which opened in 1995 and currently makes the CRV, with an annual capacity of 63,000 units. At Celaya, Honda has invested $800m since early 2012 and the facility has an annual capacity of 200,000 units. It has now started production of the new Fit small car and will add a small SUV by the end of 2014.

Celaya is a fully integrated plant and incorporates a number of technologies previously introduced at the ultra-modern factory at Yorii, Japan. Amongst these are: a high-speed servo stamping press, which includes a high-speed die changing system that is claimed to improve efficiency by around 40%; and a new three-coat, two-bake water-based painting system which replaces the traditional four-coat, three-bake process, reducing energy use by as much as 40%.

Near to Celaya, Honda also has a $470m transmissions plant now under construction, which will initially produce 350,000 continuously variable transmissions (CVTs) per year for its US-made models from mid-2015. There are plans to double CVT output by 2020, at which point Honda will be able to make 2m transmissions, including conventional automatics, across its NAFTA production network.

Volumes & exports rising in the US
Allowing for sales elsewhere in NAFTA, ie Canada and Mexico, Honda’s US operations were actually net exporters of vehicles in 2013, exporting nearly 109,000 vehicles compared to 88,500 imports, most of which came from Japan. In 2013, imports were primarily of the Fit, which as mentioned is now produced in Mexico. Total Honda production in the US last year was just over 1.3m vehicles and more than 1.78m across NAFTA.

Three of the company’s US plants achieved record production volumes in 2013: Marysville, Ohio, produced over 492,400 units, 12% up on 2012; at East Liberty, also in Ohio, production exceeded 242,000 units; and the Greensburg in Indiana made nearly 242,000 vehicles, a 21% rise on 2012 (this includes production of the Civic hybrid). Meanwhile, the Lincoln plant in Alabama, which made nearly 334,000 vehicles in 2013, exported over 20,000 vehicles to 49 different countries worldwide. Honda’s Canadian plant in Ontario produced a little over 408,000 vehicles, just below the 2012 level, while the original Mexican plant made just over 63,000 CRVs, a production record.

In a highly symbolic move, Honda announced in May 2013 that it would build the new NSX supercar in North America, at a new Performance Manufacturing Center in Ohio where it will invest $70m. The original NSX models were first made at the Takanezawa plant in Japan from 1990, before being switched to Suzuka in 2004-5. Production of the new NSX will begin in 2015.

Honda now has the capacity to make over 1.9m units in NAFTA, with close to 95% of Hondas sold in the USA now made in the region. In the US, its production footprint consists of: four vehicle plants, two engine facilities and two transmissions plants; in Canada, there are two car plants and an engine plant. While Honda’s experiences in the region have been largely positive, especially in terms of production volumes, it is not without its problems. Like most other vehicle companies, it has been affected by recall issues, last year recalling over 19,000 Acura MDAX SUVs due to a prop shaft problem.

Research & development in Brazil
In February this year, Honda opened its first South American R&D centre, in Brazil. This facility will concentrate on developing models for the local market, and specifically increasing the local content. The company had already announced a second vehicle plant in Brazil in 2013; production at Itirapina, with a capacity of 120,000 units a year, will begin in 2015 and focus on the Fit and other models based on the Fit platform. Honda’s existing plant, also with a 120,000-unit annual capacity, makes the outgoing Fit, plus the City and Civic models.

Honda is also building a wind farm in Brazil which will be fully operational by September 2014 and, it is claimed, will be capable of generating the same amount of electricity as Honda consumes in a typical year of production in Brazil.

A growing footprint in China & Asia
In Asia, Honda’s growth is spread widely and includes new and expanding plants in China, India, Thailand, Indonesia and Malaysia. In China, Honda has two major joint ventures: Guangqi Honda and Dongfeng Honda. In each of these, Honda has a 50% stake, with local partners holding the remaining 50%. As well as producing vehicles in the country, it is also expanding its R&D capabilities here. In June, the company announced that it would expand its capabilities so that the entire development process, from styling through design to testing can be conducted inside China.

Guangqi has two facilities, HuangPu and ZengCheng, each capable of producing 240,000 units per year. ZengCheng will also open a new line in 2015, adding another 120,000 units. This JV will produce Acura models as well as Hondas from 2016. Meanwhile, Dongfeng Honda has two plants with a total of capacity of 340,000 units, which will rise to 360,000 by the end of 2015. These expansion plans will facilitate a doubling of the number of models Honda sells in China, with the company aiming to have 20 models available by 2016. The OEM also has a plant of its own for exports, producing 50,000 units a year.

In India, Honda has two car plants, the first at Greater Nodia and the second at Takapura, the expansion of which was completed in February 2014. This is a full manufacturing facility, with its own forge, press shop, powertrain operations, welding, painting and plastic moulding, and assembly facilities. Capacity at each plant is 120,000 units a year. 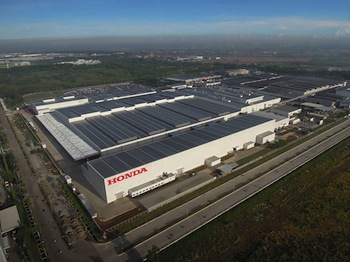 In January 2014, Honda opened its second plant in Indonesia, at Karawang, following the completion of a construction process which started in mid-2012. Like the new plant in India, this is a full manufacturing operation, with stamping, plastic injection and full engine and vehicle assembly operations. The capacity is 120,000 units per year, bringing the total in Indonesia to 200,000 units annually. The principal model made at the new plant is the Brio, replacing imports from Thailand.

In Malaysia, Honda is one of the first major global vehicle-makers to have invested in full production facilities. In January 2014, it opened its second line at Malacca, doubling the annual capacity to 100,000 units. Malaysia is also one of the main hybrid vehicle markets in South-East Asia and a capacity of at least 10,000 hybrids per year has been built into this factory. Here, Honda has a controlling 51% stake, in contrast to the 50:50 JVs in China.

Thailand has been one of Honda’s major production locations outside Japan for several years and has played an important role in the supply of electronics systems to various Honda plants around the globe, in addition to producing vehicles. But Honda’s plants in the country were severely disrupted by the floods of 2011, one consequence of which was a delay in the start of production of the new CRV in the UK. Having overcome this disruption, Honda decided to establish a new plant in Thailand to raise total vehicle capacity in the country to 420,000 units.

At a cost of $530m, the plant in Prachniburi had been designed to produce 120,000 units per annum; however, this month the OEM announced a delay to the start of production for up to one year because of market decline plus the uncertain political situation in the country. The plant had been due to open in April 2015. Falling sales in Thailand have also resulted in significant overcapacity at the Ayutthaya plant, where Honda had planned to raise capacity in two stages to 300,000 units. The factory is currently running at less than two-thirds utilisation.

Decline in Europe
While Honda has grown strongly in Asia and America, its UK operations remain a serious problem; its factory in Swindon has a nominal capacity of 250,000 units per year but has not approached full utilisation in recent years. Reports suggest that only 120,000 will be made this year, down from just under 140,000 units in 2013. With production of the new CRV and Civic failing to meet expectations, the decision has been made to close Plant 2 at Swindon, with production concentrated in Plant 1 by the end of 2014. Production of the low-selling Jazz will also come to an end in 2015, with the replacement model coming from another Honda plant – perhaps, in a sign of the times, from Mexico or India.