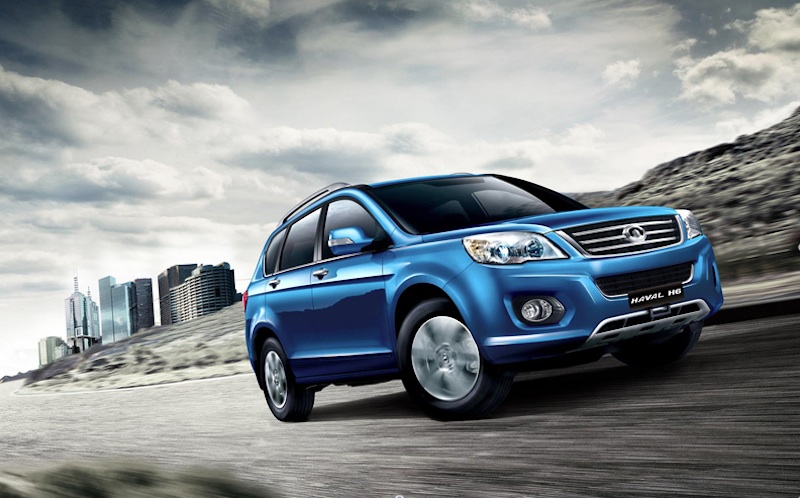 The rate of market growth might be slowing, but Great Wall Motors (GWM) is going from strength to strength in its home country. A decision taken five years ago to pour resources into the then Hover brand is proving to have been far-sighted. Following a name change to Haval, China’s equivalent of the Jeep or Land Rover brand is rapidly filling up GWM’s production capacity. And this at a time when some local OEMs such as Chery continue to struggle with a glut of under-used factories and slow-selling models.

As sales of mid-sized and compact sedans fall, registrations of crossovers and SUVs are leaping forward. By the end of April, overall production for GWM’s model range was up by 45% year-on-year. Of the company’s 80,419 total deliveries in that period, 63,921 were SUVs, the latter representing a surge of 71%. Just as in the West, Chinese consumers have fallen for the higher driving position, perceived greater safety and versatility of these types of vehicles. Haval’s keen pricing also continues to be a big factor in its success.

The SGMW Wuling Hongguang minivan has been China’s best-selling vehicle for some years now, but in April the market received a jolt in the form of a new second-placed model: the Haval H6. This compact SUV is manufactured at GWM’s Tianjin plant in the north-east of the country. The H6 has been wildly successful, and with over 300,000 sold in 2014, it was China’s number-one SUV, beating the Shanghai Volkswagen Tiguan.

GWM makes one other SUV in Tianjin and that too has become something of a sales sensation thus far in 2015. The smaller Haval H2 has been moving out of dealerships at a rate of over 10,000 a month since last October, having gone on sale in July 2014. This Ford EcoSport-sized model has a standard 1.5-litre turbocharged petrol engine, sourced from the company’s powertrain plant in its home city of Baoding.

An ABB welding robot used at GWM Tianjin
Collaboration with foreign tier ones
One of the key suppliers to the Tianjin manufacturing complex is ABB. Multiple robots, as well as the Swiss-Swedish company’s FlexFramer and robot roller hemming technology are used for welding; ABB and GWM claim that the shock resistance capacity of Haval H6 bodies is 30% better than it would be with common braze welding. There are 30 workstations on the plant’s main line, featuring 27 ABB robots. These are mainly the types IRB 6640 and IRB 7600 which process the more than 4,000 welding points on the vehicle bodies.

The welding of bodies and door covers is performed by the IRB 6640s, each of which has a payload of up to 235kg. By contrast, an IRB 7600’s payload is up to 500kg and GWM uses these in the flex-framing station at Tianjin. Here, they marry the body sides with the roof and underbody, creating the main frame.

With labour rates steadily climbing in many regions of China, ABB saw further opportunities ahead. Its relationships also tend to be long term, with cooperation between itself and GWM dating from 2006. Their latest collaboration is in the province of Hebei, where GWM’s new Xushui plant in the city of Baoding began building its first Haval models in late 2014.

The operation at Xushui is on a large scale, with 600 industrial robots installed in the bodyshop of the second phase of GWM’s SUV body-in-white plant. IRB 6640, IRB 7600, and IRB 2600 robots are used, with ABB also a supplier to GWM’s closures and underbody subassembly lines. The second phase is now taking capacity up to 250,000 units a year. The H9, H8, H6 Coupe and H7 Coupe are expected to be the eventual four models to be manufactured at Xushui, as the Haval brand expands into higher pricing segments.

GWM’s next major manufacturing investment is also taking place at its base in Baoding. An investment of CNY3.4 billion ($548.6m) is underway for the construction of yet another SUV plant in the company’s home city. Due to open in 2017, the new factory will have a capacity of 250,000 vehicles per annum, taking the GWM’s total manufacturing potential in China to over 1m units for the first time. Currently, GWM’s Baoding and Tianjin operations can build 800,000 cars and SUVs a year.

Halla chassis components for new platforms
Last year, GWM engaged another major tier one when it signed a strategic cooperation agreement with Mando. The companies have agreed to cooperate in the development of steering, suspension and braking systems. The latest deal with the Halla subsidiary expands upon an existing supply agreement for shock absorbers, vacuum booster and rear parking brake assemblies, which Mando provides for the big-selling Haval H6 SUV.

As long as the Chinese market’s SUV size segments continue to experience rapid growth at the expense of sedans and minivans, GWM is perfectly placed to benefit. While it already has multiple models in these vehicle classes, more are coming. The first of what will be multiple additional products should be the H7, a new range of mid-sized 4x4s. Two Haval prototypes which provided a preview were revealed at this year's Shanghai motor show in April. The H7 will be the standard model, with a production version of the H7 L prototype also due in dealerships later this year. The second of these will have a longer wheelbase and seating for seven occupants. The company is also working on a low-roof H7 Coupe and plug-in hybrid derivatives. These are due to be launched in mid-late 2016.

The Haval brand’s smallest model, the H1, is built in Baoding, as are the Great Wall Voleex C20R and C30 small cars, Haval H5, Wingle (Steed in overseas markets) pick-up and M2 small crossover. As the last of these is nearing the end of its production cycle, it will soon be phased out, with the H1 already being its effective successor. This strategy is set to be the OEM’s future template as low-margin small cars are one-by-one replaced by higher-priced SUVs. This is one of the reasons why GWM continues to gather strength in China, as foreign manufacturers such as Volkswagen and Toyota do not (yet) offer competitor vehicles.

The Xushui plant gained an additional product this May, in the form of the H6 Coupe. Similarly sized to a Mazda CX-5, this SUV is an attempt to mimic Land Rover’s strategy by offering a higher-priced and more stylish model, in the style of the Range Rover Evoque. The controversial H8 – its manufacture had two false starts due to quality issues – is now fully in production at Xushui. It has been joined by the related H9, which at 4.9 metres long, is GWM’s largest SUV yet and a rival for the Toyota Prado. All of these models are powered by the OEM’s own four- and six-cylinder petrol engines, with transmissions being six- or eight-speed automatics. 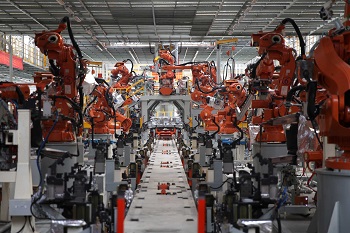 The GWM Tianjin welding line, featuring robots from ABB
GWM's global reach
As well its Chinese plants, GWM has SKD and CKD operations in various countries, including one at Lovech in Bulgaria, which supplies tariff-free imports of the Steed pick-up to the Italian market. The same model is also assembled at Pamplona in the Philippines. Other SKD plants exist in Senegal, Vietnam, Malaysia and Iran; but a factory that had been planned for Thailand was put on hold in 2014 due to social unrest in the country.

Russia, despite its current economic woes, is where GWM is planning its most ambitious foreign production outpost, with a JV having been established in 2014 to build a plant in Tula Oblast. The annual capacity of 150,000 units might at first sound much too large but Russia is now GWM’s number-two market after China (Chile is number three). Sales of SUVs remain robust there, despite the collapse of overall vehicle registrations – something GWM has cannily noted.

Building on its growing domination of the Chinese market by quietly, slowly, moving into low- and medium-income markets seems to be a sound strategy for Great Wall to be pursuing. In the 2020s, if GWM gets its quality, marketing and aftersales to high enough levels, Haval could become a global rival for Jeep and Land Rover. Worryingly for Fiat Chrysler Automobiles and Tata Motors, in China their SUV brands are already being undercut and outsold by this fast-learning, privately owned local OEM.