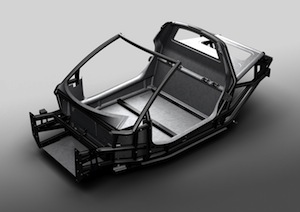 Japan – The carbon-fibre chassis, billed as the first such affordable structure for mass production, is being shown at the Tokyo Motor Show as part of the Yamaha Sports Ride Concept. UK-based Gordon Murray says the chassis brings Formula One materials and technology “within reach of the everyday motorist”.

The innovative structure originates from Gordon Murray’s iStream manufacturing system, first unveiled five years ago, and is claimed to offer: light weight without the high costs associated with most alternative materials; new levels of chassis rigidity, durability, corrosion resistance and safety; a reduction in capital investment; lower energy requirements during manufacture; and product flexibility from a single platform.

The new system replaces the glass content in iStream with carbon fibre to offer lighter weight and greater rigidity. Unlike hand-built supercars with monolithic carbon skins, iStream Carbon consists of two skins either side of a honeycomb interior. Developed over the past two years in collaboration with Toray Industries, Innovate UK and ELG, Gordon Murray says the production process is now fully industrialised and involves a cycle time of only 100 seconds, at annual volumes of 1,000-350,000 units. Manufacturing energy is reduced by up to 60%, and capital investment by as much as 80%, according to the company, which says that the relatively low investment and piece-part cost “will enable it to be used in sub-premium market segments”.

“Light weighting is the final frontier in the automotive industry fight to lower emissions,” said Gordon Murray, chairman of the company. “There have been great strides forward in engine design, electrical control systems, tyre design and transmission technology, but we are now experiencing a plateau in the advance of technology where the law of diminishing returns comes into play. A step-change in vehicle weight to enable downsizing of powertrain and components is all we have left in the armoury.”

He claimed that iStream and iStream Carbon represent the necessary step-change, enabling lightweighting not only for conventional vehicles but hybrid and electric models. Murray said iStream Carbon would open up more market segments for the company, which is already working on seven vehicles using its original iStream technology.