GM Europe – the group in profile

General Motors Europe AG, a subsidiary of the global group, was established by GM in 1986 and has operated up to 14 production and assembly facilities in nine countries, and employed around 54,500 people. GM’s core European brands are UK-based Vauxhall and Germany-based Opel, which sell a similar range of cars in different markets.

GM formerly owned the Swedish marque Saab until early 2010. After Saab was sold to Spyker, GM and its German subsidiary Opel decided to eliminate the former GM Europe organization in Zurich, Switzerland. Opel is now managed from its brand headquarters in Rüsselsheim, Germany. There are now independent organizations in Europe: Adam Opel AG, which includes the Vauxhall division, and Chevrolet Europe GmbH. Chevrolet is still managed and headquartered from Zurich, Switzerland.

Around the region – plants and plans
GM Europe needs to rationalize its plants, and closures are now the only way to do this. It is proposing to close at least one of its four German plants after 2016. Bochum is the target, partly as Astra production has been won by the UK’s Ellesmere Port plant. While the carmaker has ruled out compulsory redundancies for the next four years, and has extended an existing agreement with its workforce, it is almost certain that it will cease production at Bochum in 2016, when the Zafira MPV comes to the end of its lifecycle. “Opel needs to adjust its business in a way that enables profitability even in difficult market conditions,” Opel Chief Executive Karl-Friedrich Stracke said in a statement in late August 2012.

GM closed its Belgian plant in Antwerp two years ago, unsurprising as Belgium ranks as one of the most expensive places 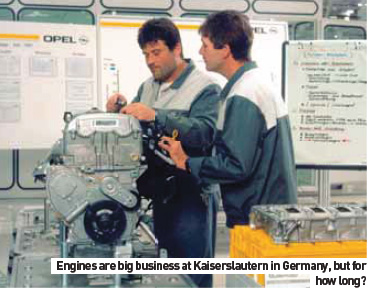 in the world to make cars. Ford and Volkswagen produce mainstream models there but when demand for GM cars dropped in the last four years, Antwerp was the obvious first choice for closure.

As AMS went to press, GM Chief Executive Dan Akerson stated that he is hopeful the company soon will reach a cost-cutting deal with its German labor unions, which would be a key step in the company’s drive to turn around its money-losing European operations. Mr. Akerson said the automaker is in “constructive, professional talks” with unions in Germany and other European nations, and said that streamlining its European operations is the company’s top priority.

While GM needs the support of the region’s unions to ease the passage of its restructuring plan for Opel and Vauxhall, the uncomfortable fact is that IG Metall (the dominant German metal worker’s union) and Germany lost out in the negotiations to win the new Astra production. The UK union, Unite, worked very hard to peg labour rates and offer exceptional workforce flexibility at the plant in the north of England. Perhaps the pain of the ‘double-dip’ recession in the UK gave the union and its members a starker reality check than their German counterparts? According to GM Europe’s management, further talks with labour unions in coming weeks will also include a proposal to delay this year’s negotiated wage increase while considering building non-Opel vehicles in European plants. German workers have wanted Opel plants to make cars for GM’s faster-growing Chevrolet brand for some time, seeing the success of the ‘bargain’ brand in Europe. But it will not save Bochum.

Ellesmere Port – a true union success
Following the decision to award the new generation Astra production to the UK plant, Vauxhall chairman Duncan Aldred announced a €158 million investment in the facility. This will create around 700 new jobs, with another 3,000 positions at suppliers and service providers. The factory will move from two to three shift working, while “unprecedented” levels of flexibility will be introduced. Production is set at 160,000 guaranteed minimum, with a capacity of more than 200,000 units per year. Assembly of the new car is scheduled to start in 2015 and Ellesmere Port will be the lead plant of only two in Europe building the new model, the other being Gliwice in Poland. Rüsselsheim has been ruled out as a home for the vehicle, the German facility will continue producing the five-door current Astra and Insignia.

An Insignia-platform Buick is mooted, and an insider at GM told AMS that the presently China-built Buick Lacrosse could come to Europe to top off the range, which has not had a European-built GM E segment car since the last Omega rolled out of Rüsselsheim in June 2003. 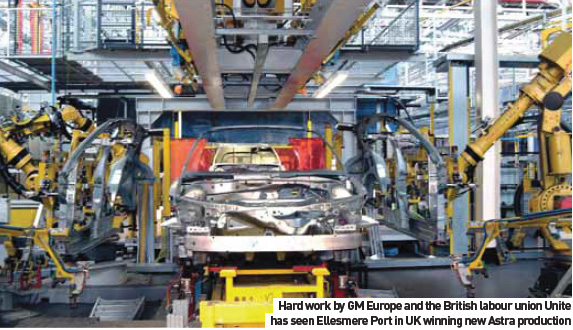 Kaiserslautern – engines and alloys
In theory, Opel/Vauxhall’s Kaiserslautern plant is fairly ‘fireproof ’; it makes components and engines, including the 1.9-litre and the 2.0-litre diesel units used in several passenger cars. Its spread of component making may also assure its survival; aluminum bonnets, front frames, suspensions and rear axles are also made there and the modernisation of the press shop, in 2010, to accommodate stamping light metals may help it grow into the source of parts for tomorrow’s lighter and more fuel-efficient vehicles. But while General Motors is a global player with a policy of ‘build where it sells’ being much touted by senior management, it is determined to continue with another policy: lowest cost location internal sourcing. The last major investment in machining lines at Kaiserslautern was in 1999 when it tooled up for the new generation of aluminium engines, some more lines were installed and existing ones refreshed in 2004/5 for new generation cylinder heads and common rail direct injection diesels but further investment seems unlikely.

And the lowest cost location within reasonable delivery distance? GM Powertrain Uzbekistan. If this sounds outlandish, bear in mind that this plant presently serves the Kazhakstan plant in Astana, which makes Chevrolets for the local market. The engine plant is run by Andor Paizer, formerly Plant Director at GM Powertrain Hungary (another possibility for a European powertrain ‘hub’), a man with a thirst for high volume production and high quality, a plant that could serve a wider, more pan-European, market. Powertrain components could also come to Europe from India, China or south-East Asia; GM is making investments in Indonesia as it rightly sees the region as not only the next area of great domestic growth but also as an excellent production hub for high-value parts and systems – such as powertrain.