Gaining the edge in hemming

As long as car body panels – specifically closures such as boot and hood lids – are made out of metal, they are likely to continue to be subject to hemming as a means of joining different panels together. The basic technique is simple and well-established; one panel is made to overlap the other and the two are joined by means of the extended edge being folded back around the other, probably with the aid of some adhesive. There are currently three ways of accomplishing the task – two established methods and another that is relatively new. 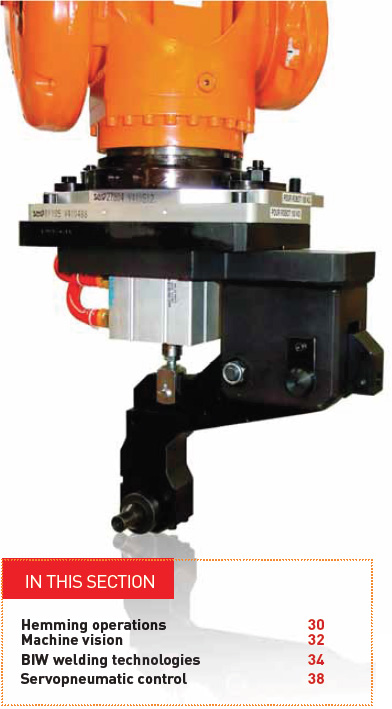 Established techniques
The two well-established techniques are those of press and tabletop hemming. Superficially similar, press hemming involves a single operation in a large hydraulic press, whereas tabletop hemming uses a series of electricallyactuated heads. There are also differences in their applicability, with press hemming able to produce different parts in the same operation, something that is beyond tabletop hemming – although the latter scores in its ability to produce more complex geometries.

Of the two methods, tabletop hemming is the one that now predominates. However, recently both have come under an increasing challenge from a third approach; robot roller hemming. As the name suggests a robot runs a roller around the edge of the sheet so that hemming takes place as a continuous, sequential, localised operation. Not the least of the differences between it and the other two is that the forces involved are much lower – perhaps just a hundred kilograms at the point of contact rather than a hundred tonnes overall. Which technique is chosen depends on a number of factors, some of which may be quite subjective, such as simple familiarity with one technique or another, or it involve a trade-off between the perceived ease-of-control of, say, tabletop hemming versus the greater flexibility and intrinsic reprogramability of robot roller hemming. Paul Meeson, advanced engineering director with UK-based body-in-white parts maker and system installer Stadco. Meeson has been in the business long enough to remark on two general trends that have developed over the years. The first was the enhancement of tabletop hemming by robotised loading and unloading techniques to provide it with a mix of flexibility and volume production capacity; making it the market-leading procedure at the turn of the millennium. The second has been the advance of robot roller hemming to at least an equal status in the industry at large. For Stadco, robot roller hemming is now definitely the technique of choice. Meeson says this is entirely to do with what the company regards as its procedural advantages – nothing to do with final product quality which is identical in either case. As such, he confirms, that when vehicle OEMs come to the company for hemmed parts they do not specify a production method. “They leave that to us to decide,” he states.

Productivity and flexibility
A major factor has been the near complete obviation of comparative advantages and disadvantages for different hemming methods stemming from different production volumes. When robot hemming first appeared, Meeson explains, it was essentially a tool for lower to medium volume applications – especially if there was a high degree of product variation – with tabletop hemming predominating well into the last decade for volumes of around 100,000 parts per year and upwards. But Meeson says emphatically, that with the proviso that multiple cells may be involved, robot hemming can cope with much higher volumes. “I’ve seen it used to produce 250,000 units a year,” he states, though he cannot say where.

Another advantage of the robotic approach, Meeson adds, is the extent to which the investment involved is retrievable even if there is a complete change in the part being manufactured. Only the ‘lower steel’ on which the workpiece actually sits and a ‘clamping spider’ that holds it in place from above is completely dedicated to a specific part, he explains. In consequence as much as “50-60%” of the investment in a robotic hemming installation is reusable. But Meeson certainly concedes that it is possible to reach different conclusions when the variables of product variety and volumes are considered against each other in different circumstances.

Nevertheless Meeson himself is entirely convinced by the argument for robot roller hemming and points out that it lends to itself to an enhancement technique that is just beginning to make its presence felt – that of using a laser to “close the join” between the overlapping panels after the hemming process itself has taken place. The technique not only enhances the overall strength of the join but is also aesthetically pleasing.

Adaptable technology
Another advocate for the technology is Alan Stapelberg, BIW product manager for robot roller hemming supplier and system integrator ABB Engineering in Shanghai. One perhaps under-appreciated aspect of the approach, he argues, is its ability “to handle variation”, not least variations in the geometry of the metal sheets that are joined together in the process. This is an attribute likely to prove particularly useful at the very start of the production of a newly designed part when, as can be the case, the quality of the parts coming from the press shop has not yet stabilised. He says that it will facilitate the ability to use these parts, which might otherwise have to be scrapped, in order to prepare trialout sub-assemblies needed for the testing of the rest of the production line. This results in direct savings during the commissioning as well as earlier start up of production.

Push and pull
In the case of ABB’s own products, Stapelberg states, that capability is very much a consequence of the hemming head – the tool at the end of the robot arm that actually comes into contact with parts being hemmed – as well as the path accuracy of the robot. The company has two main such products; one entirely ‘push’ and the other ‘push-pull’, the latter meaning it can be inserted into an assembly and pulled back up to hem an inner surface. Stapelberg confirms that in operation a hemming head can usually achieve a speed of around 1,000mm per second when moving in a straight line, a figure that will necessarily decrease when it has to be manoeuvred around more complex shapes. But he also suggests that it is wrong to use this metric when assessing the suitability of the technique for a particular application. Instead, the right one is “jobs per hour”, a measure that more closely relates the technology to the overall line-speed. On that count Stapelberg says the current benchmark for performance excellence is in the range of 60-80 jobs per hour per station, a figure he says ABB has certainly achieved. But a further factor that needs to be recognised is that a hemming station may well comprise more than one robot and more than one die on which the assembly is mounted. However, that does not mean that there will be two workpieces in the station at the same time. Instead, for example, a right and left door could alternate with each other allowing offline loading of one assembly while the other one is being worked on, and utilising the same fixed investment for two different parts.

Quantitative factors
Despite Meeson’s and Stapelberg’s evident belief in the utility of robotic roller hemming, the technology is far from predominant on a global scale and whether it is implemented depends on a number of variables. That’s the view of Colin Green, business manager for hemming solutions provider DV Automation, a subsidiary of robot maker Kuka. The company provides both types of systems and Green agrees that there is little to choose between them in terms of final product quality. Instead he perceives market preference as driven by a mix of quantitative factors – most obviously required cycle times – and local considerations. A tabletop system, he says, with a cycle time in the region of 30-40 seconds is likely to be twice as fast as a robot cell doing the same job. However, it will also be more expensive and, as he concurs, lack the sort of reusability that Paul Meeson also identifies, but it will not require the level of software programming expertise that a robot cell might demand.

Regional requirements
Green suspects that the future might see a regional bias in the take-up of the technologies involved, with tabletop hemming establishing itself as the preferred option in areas such as South America and India – characterised by low product variation but higher volumes – and robotic roller hemming coming more to the forefront in Europe. In short, this is an area in which costs, timescales and skills requirements rather than product quality are likely to be the key factors governing purchasing decisions by both vehicle OEMs and parts makers over the foreseeable future.