In the past year, Ford has concentrated on delivering its high-profile programme for an aluminium-bodied F-150 pick-up truck, but the OEM has also started reorganising its manufacturing footprint in North America 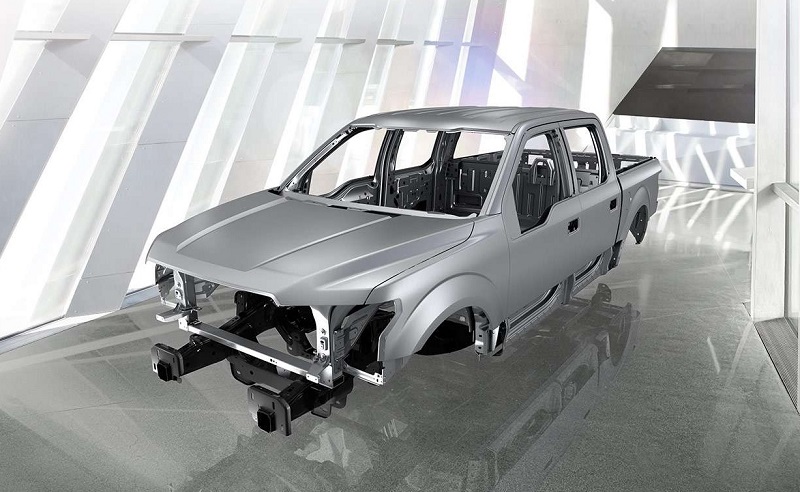 Ford's ambitious programme to produce an aluminium version of its F-150 pick-up truck has not been without its problems and costs. The programme took longer than anticipated to get up to full production and this led to a loss of segment share for the F-150 from around one-third in mid-2014 to almost one-quarter in mid-2015. Moreover, while Ford had expected that rival vehicle-makers would follow its path by introducing a range of entirely aluminium-bodied trucks, this has not happened.

Most direct competitors, especially GM and Ram, have resolutely kept to steel for their truck bodies, although they have adopted aluminium on a selective basis, for example doors and fenders. The Japanese OEMs’ full-size pick-ups, the Toyota Tundra and Nissan Titan especially, will also continue with steel as the primary structural material. In addition, the insurance industry has voiced concerns over the likely ongoing costs of repairing F-150s, although with sales finally taking off during the middle of the year, and a lack of supply (rather than a lack of customers) being the main problem, it seems that such concerns have not significantly impacted on consumer choice. The F-150 is as popular as ever.

The technologically ambitious F-150 programme took longer than anticipated to get up to full production
Tackling production and demand challenges
Addressing the need to drive down fuel consumption and improve its CAFE (corporate average fuel economy) ratings, Ford decided that an aluminium body for the new F-150 was the way forward, especially because of the excessive weight of the previous model. Ford also wanted to position the new model as technologically different from its competitors. Although the early days of production of the new F150 were dogged by technical problems, by the summer of 2015 Ford’s challenge had turned to keeping up with demand.

Meeting demand was a problem because a key supplier, Metalsa, could not cope with the volumes required for initial pipeline filling. As a result, Ford has had to bring in a second supplier, Tower, for the steel chassis frame. Tower is now installing two new assembly lines at its Bellevue, Michigan, factory to maintain Ford’s volume requirements; this contract will be worth as much as $100m a year.

Shifting production to Mexico and Thailand
As well as resolving various production bottlenecks on the F-150 programme, Ford has started making changes to its North American manufacturing footprint. In July, it was reported that with falling demand for its compact vehicles, the Focus and C-Max, Ford had decided to shift production from its Wayne, Michigan, plant to a facility in Mexico, when these models switch to a new platform in 2018.

In November, reports emerged that as part of a wide-ranging agreement with the United Auto Workers (UAW) union, not only would Focus and C-Max production move out of Michigan to Mexico, but also that US production of the Taurus, Fusion and Lincoln MKC would end when these models completed their current lifecycles. Mexico is the likely location for almost all future North American production of Focus/C-Max-size cars, while manufacture of the smaller Fiesta could move from Mexico to Thailand in order to free up space for the vehicles which are expected to leave Michigan.

Fusion production will be concentrated in Mexico, where it is currently made in addition to the US, while the future location for the next Taurus, if there is to be one, remains unclear.

Ford’s strong performance in North America is in continued contrast to its loss-making status in Europe, the Middle East and South America

Once these model changes come into effect, the only cars that Ford will make in the US will be the Mustang and the Lincoln Continental; Ford’s US production line-up will focus on pick-ups and SUVs. The UAW agreement would appear to confirm a return to US production for the Ranger pick-up and Bronco SUV, two nameplates that have been absent from Ford’s North American range for several years. The Ranger was last made in St Paul, Minnesota, in mid-2011, although a pick-up using the Ranger name – based on an Australian body-on-frame design – is made in South Africa, Thailand, Argentina and also in low-volume kit format in Nigeria. The Bronco nameplate disappeared in 1996. 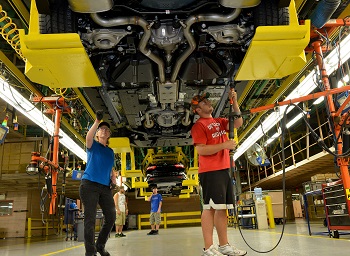 The Mustang and the Lincoln Continental will be the only cars Ford makes in the US. The main focus will be pick-ups and SUVs
Facing a model dilemma
With the F-150 forming such a high proportion of its US sales, Ford needs a smaller pick-up truck to boost its fuel-efficiency ratings and there have been reports that it might bring its Brazilian small truck, the Troller, to the country, although any US sales of this model are likely to be small. Another possibility for production at Wayne is the Transit Connect small van, which is currently imported to the US from Ford Valencia in Spain.

In the aftermath of the 2008 recession, Ford Wayne received a $550m upgrade, changing from a large-truck to a compact-car factory. This was partly funded by government grants to support the transition to more fuel-efficient vehicles such as the Focus and C-Max. That said, the current version lacks a hybrid model, which is not expected until at least 2018. A future hybrid based on the next Focus platform would likely be made in the US rather than in Mexico. However, with fuel prices falling, the economic pressure on American consumers to continue downsizing vehicles has lessened and larger-vehicle sales have risen, as compact-vehicle sales have fallen; in H1 2015, Focus and C-Max sales were down by 3.2% and 17% respectively.

Ford lacks a compact crossover, or B-segment SUV, in the US. It has nothing to compete with the Chevrolet Trax or the Honda HR-V, having chosen not to import the EcoSport from Brazil or India; in fact Indian media reports have suggested that 90,000 vehicles could be shipped from India to the US from the end of 2017. Ford really needs a vehicle for this growing segment much sooner, both to meet market demand and also to bring down its average fuel-economy figures, but there have been reports that it might delay the launch of the EcoSport in North America until 2018 or even 2019. The current vehicle has not been successfully launched in Europe, where the small crossover market is booming, so Ford may well decide to wait for the next version of this vehicle rather than risk a second major market launch with one which is less than optimal.

At the opposite end of the market, Ford is planning to bring back the Lincoln Continental. This nameplate is due to go into production at its Flat Rock plant in Michigan, replacing the Lincoln MKS sedan. The Continental will be made alongside the Mustang sports car. It is claimed this new Lincoln model has been designed with export markets, especially China, in mind.

In the commercial-vehicle sector, Ford has started building the new generation of its medium trucks, the F-650 and F-750, in Avon Lake, Cleveland – saving around 1,400 jobs. This plant, which had been threatened with closure, had previously made the Ford Econoline and E-series vans. These vehicles have been discontinued and replaced by US-built versions of the European Transit van, which is made at Ford’s truck plant at Kansas City, Missouri.

Negotiating labour agreements
Aside from tweaking its product footprint and dealing with the challenging launch of the F-150 pick-up, Ford has been engaged in contract talks with the UAW over the next labour agreement covering around 52,000 workers nationwide. Having avoided bankruptcy in the last recession, Ford has not been able to benefit from the all-new labour agreements which GM and Chrysler negotiated in the aftermath of their bankruptcies.

Ford currently pays its workforce an average of $57 per hour, which is around $2 more than GM, but also $10 an hour more than Chrysler. Whereas GM and Chrysler have been able to recruit at the lowest end of their pay scales on an unlimited basis, under the remaining agreement Ford can only have 28% of its workforce on the lowest pay scale. This places it at a clear cost disadvantage against its domestic competitors and is why Ford has had to change its manufacturing line-up in the US; a move which will, subject to the UAW ratifying the labour deal, lead to investment of $9 billion in its US factories in the next four years.

Ford’s strong financial performance, while welcomed by investors, was also used by the unions to drive a hard bargain. Second-quarter profit for 2015 rose 44% to $$2.6 billion pre-tax and $1.9 billion after tax; this was its largest-ever quarterly profit in North America and was achieved without the benefit of full sales rates for the F-150. Moreover, Ford has said that it expects its H2 results to be even better, with F-150 volumes due to contribute significantly; this clearly strengthened the UAW’s position in the labour negotiations.

Ford’s strong performance in North America contrasts with its continued loss-making status in Europe, the Middle East and South America, although in Asia-Pacific, cost-cutting enabled a modest profit of $192m for the quarter. The strong financial performance in North America was largely down to rising sales of SUVs and crossovers; for example in July, Ford reported that Lincoln MKC sales were up by 60%, MKX sales by 27% and the Ford Edge by 17%. That said, the market is also moving away from the largest, most fuel-thirsty SUVs, as shown by the 38% decrease in sales of its Expedition model.

Although profitable, Ford has reached something of a crossroad in North America. It needs to cut its cost base to remain competitive with GM and Chrysler, as well as the Japanese and Korean brands, all of which have lower costs than Ford, but it has received little sympathy from the UAW. In practice, Ford will be pleased to have reached agreement with the union, subject to members ratifying the deal, because it will see its US production portfolio move to more profitable models and its lower-margin models transferring to production operations overseas. 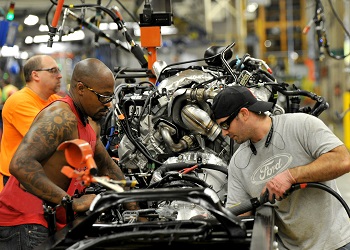 Ford's North American profits continue to come mainly from larger models such as the F-650 and F-750
Looking at future strategy
Ford’s North American profits continue to come mainly from larger models and this is despite cutting sales of V8 vehicles and increasing V6 sales, and with some customers downsizing to in-line, four-cylinder units. Ford will also launch a number of high-performance, and fuel-inefficient, versions of the F-150. These will be profitable, but run counter to the strategy of increasing numbers of small, fuel-efficient vehicles. Ford lacks the small crossovers which, even in North America, are likely to be a growing market in the years ahead, and in light of Volkswagen’s problems with its diesel engines, some of the mid-sized and compact-car market may become more accessible to domestic brands.

To take advantage of this somewhat unexpected turn of events, Ford needs to be better positioned in the small and compact-car or crossover markets than it is at present. However, its UAW agreement appears to concentrate on larger models and so any growth in demand from smaller or compact cars or crossovers will end up being met by factories abroad; its North American plants are unlikely to be sufficiently flexible to switch production back to smaller vehicles if the market moves in that direction.