Innovative paintshop processes at the company’s Kansas City plant have delivered significant improvements in efficiency, savings in materials and reduction of waste 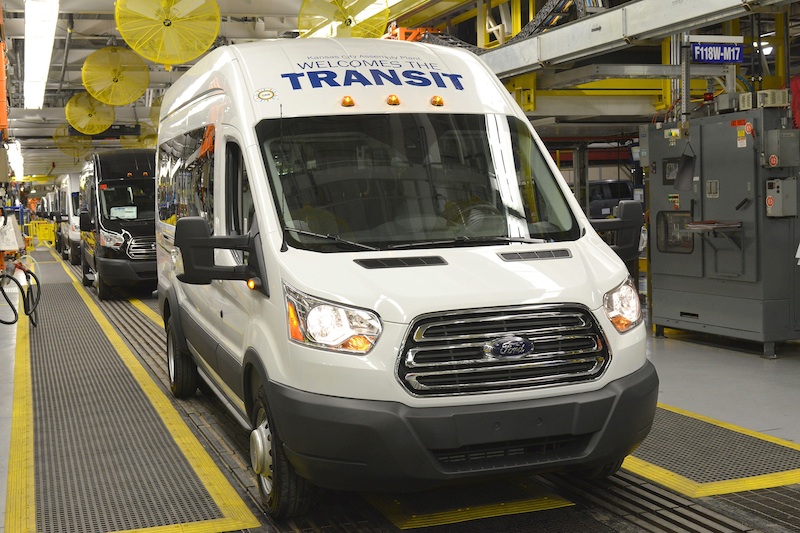 April this year saw the start of production of the new Ford Transit van at the company’s Kansas City Assembly Plant. As far the paint finishes are concerned, most of them will look pretty much as such vans normally do – about 80-90% of them will be white all over, the colour scheme that commercial vehicle (CV) users overwhelmingly prefer.

But the way those paint schemes will be applied, and the formulation of the paint materials involved, are not at all conventional. The paintshop contains, for example, an ingenious new way of handling vehicle bodies that slashes the length of the phosphating and e-coating section by as much as 320ft. But, even more dramatically, the painting process itself is claimed by Ford to be a world-first for the company – a two-wet monocoat procedure in which a single coat combining both basecoat and clearcoat properties is applied to a primer that has undergone just a few minutes of air-drying. Hence it is another form of ‘compressed process’, which dispenses with both a layer of material and an oven-bake procedure that would be involved in a conventional painting procedure.

Back to the future
Nevertheless, both the paintshop and the process it contains also have a back-to-the-future element about them. That much is confirmed by Dennis Havlin, global paint engineering development and launch supervisor for Ford. The paintshop building at Kansas is not new, but what it contains certainly is. “We have stripped out all the old booths and so it is a brand new line,” Havlin confirms. It is on the second count that the really revolutionary – and yet in one way slightly retrospective – character of the installation is most marked. As Havlin concedes, there is nothing particularly new about the idea of a monocoat automotive paint that combines basecoat and clearcoat properties. In fact, Ford has used the approach in the past.

"We found that the best overall solution was to stay with solvent-borne materials” – Dennis Havlin, Ford

Previously the technique essentially involved a basecoat with some clearcoat properties – which, in effect, meant that though the initial colour quality might be good, the paint finish lacked resilience and was subject to quite rapid degradation. Now, though, that previous combination of properties has been inverted so that the coating applied to the primer is essentially a clearcoat type of material but one that also provides the required colour to the vehicle surface. The consequence of that, Havlin states, is that the coating will still retain 90% of its gloss after four years of service: “We don’t have the sort of drop-off that you saw in the past”.

Havlin explains that ten years ago Ford carried out a comprehensive analysis of the effectiveness of current and near-future painting technologies in the context of a range of different factors, including existing infrastructure, costs, quality and environmental impact.

Altogether, 51 different scenarios were evaluated and the continuing commitment to solvent-borne materials was determined to be of fundamental importance. “We found that the best overall solution was to stay with solvent-borne materials,” he confirms. He adds that a crucial factor in Ford’s thinking ever since has been an emphasis on taking into account not just the performance of individual layers but the 'synergy' between the primer and succeeding layers.

Innovative transport
Despite the fact that the chemical processes used for the initial phosphating and e-coating procedures at Kansas are conventional, those preliminary sections of the painting line are nevertheless still highly innovative. It is the way that the physical transport of the truck bodies that is unprecedented.

A key innovation is that the truck body is fitted to a skid that remains fastened throughout the painting process and which provides the attachment points that enable it to be lowered into, and then retrieved from, each of the immersion baths involved by four pendulums. Everything that happens at this point in the process, notes Havlin, is fully automated so that all of the manual chaining and dechaining operations that previously characterised such procedures have been entirely avoided.

But the most significant benefit derives from the fact that this handling methodology enables the angles at which the bodies are lowered and retrieved to be much steeper than before. In fact, reports Havlin, this seemingly simple expedient enables the footprint of each bath to be reduced “by between 48-60ft”. This enables the overall length of the phosphating and e-coating line to be reduced by as much as 320ft, though since the line is U-shaped the corresponding requirement for the dimensions of the surrounding building are reduced proportionately rather than by the same absolute amount.

The painting sequence starts with a single primer application in a continuously flowing booth, followed by a sequence of three further stop-station booths which may or may not apply paint to the vehicle body, according to requirements. Basically, says Havlin, the options are either that the bodies are painted with the new monocoat in a single booth or are painted with a conventional basecoat and clearcoat in order to provide metallic finishes in succession in the two other booths. He also notes that Ford’s commitment to solvent-borne materials is essential to the short air-drying period which is all the primer requires before the monocoat is applied. The total process time from the point a vehicle body enters the paintshop to start phosphating and e-coating until it exits after the final oven-bake is about four hours. 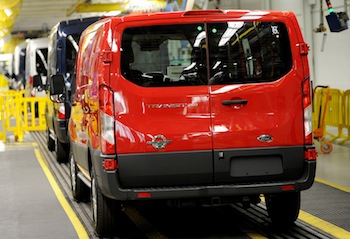 At present, the overwhelming market demand for just one colour – white – means that this is the only one available in the monocoat format. Developing new colours is, Havlin notes, always “an expensive business” and in this instance simply would not be economically feasible given the likely low demand. But at the same time, he indicates that in technical terms there would be no particular problems involved in producing other monocoat hues if there were sufficient demand. “There would be nothing involved that we wouldn’t go through with a normal colour development,” he states.

But technical rather than economic factors do militate against the process being used to produce metallic finishes. Havlin explains that, in a conventional basecoat-clearcoat sequence, the inclusions used to provide the required appearance are confined to the basecoat so that there is no danger of them protruding from the clearcoat and thereby compromising surface finish quality. But this would not be the case with just the single layer of the monocoat and hence the technique is not used to produce such finishes. “Having metallic flake in a clearcoat might be challenging from an appearance standpoint,” he observes.

Taking the opportunity
This pragmatic approach on Ford’s part is also evident in Havlin’s explanation of why the technique was developed in the first place. He says simply that Ford saw it as a logical progression from its previous three-wet compact process and that the complete refurbishment of the Kansas paintshop for the new Transit offered the chance. “We saw the opportunity and we took it,” he states. An interesting point, though, and one that appears to be common amongst practitioners of compact painting processes is that the specific procedure involved is not patented or subject to any other form intellectual property protection, though Havlin is emphatic that Ford is currently the only practitioner of the technique. In fact, this is the result of a deliberate policy by the OEM.

Havlin explains that the process at the plant was developed by Ford in cooperation with three major painting system suppliers simultaneously, though only one of them is involved at Kansas. The new paintshop is “single-sourced”, he confirms. But, he adds, the great advantage for Ford of having such a range of potential suppliers is that the company has the ability to expand its use of the procedure on a global basis as required. 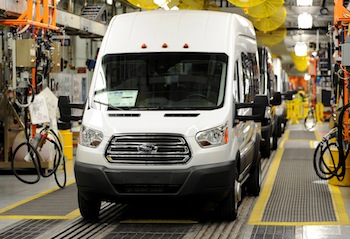 The global applicability of the process is further enhanced by the fact that there is nothing about the process that makes it more difficult to apply than more conventional counterparts. When asked if the process requires stricter levels of control either of application techniques or immediate environmental conditions, Havlin’s answer is direct: “No”.

In fact, the wider applicability of the process is already being demonstrated. In parallel with Kansas, Ford has implemented two-wet monocoat painting at Jiangling Motors Co in Jiangxi, China, a joint venture that is also producing Transit vehicles. A point to note here is that it has done so despite the Chinese government’s now quite explicit preference for new automotive painting plants to use water-borne materials. On that count, Havlin says that the facility was planned and approved before the policy was formulated.

As far as the future is concerned, Havlin indicates that there are no obvious limitations to the further implementation of the process other than its unsuitability for metallic finishes, though he does caution that it is perhaps less suitable for “retrofitting” than to a paintshop that is specifically designed to house it. But, he states emphatically, the process “meets all our requirements for appearance, performance and durability".

In fact, Havlin continues, “from a manufacturing standpoint” the process has not only met expectations but also generated at least one “unforeseen benefit”. This concerns the buffing process involving sanding and polishing that is sometimes required to rectify minor blemishes that are discovered on inspection after the final oven-bake. He explains that, with a conventional basecoat-clearcoat combination, there is a possibility that this apparently minor operation can compromise the paint finish by entirely removing the clearcoat from an affected area, exposing the basecoat. The new process nullifies this danger because the monocoat is in effect a monolithic clearcoat. “It gives you a lot more flexibility to sand and polish without having to do a spot repair,” he says. 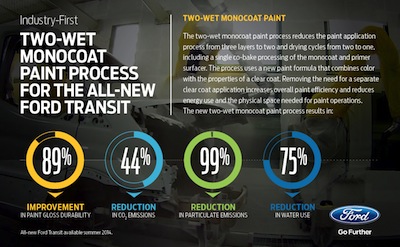 At a more general level, Ford is also keen to stress that compared with conventional counterparts the new paint process uses less energy and water and also reduces CO2 and particulate emissions. The figures involved are certainly impressive. The official Ford statistics are a 44% reduction in CO2 emissions, 75% in water consumption and 99% in particulate emissions. Admittedly, Havlin adds the caveat that those are estimates extrapolated from the ramp-up period for the process rather than precise figures derived from continuous production, but he gives no indication that Ford expects reality to differ much.

The savings for water consumption are in large part a consequence of the dry scrubbing used at Kansas in place of a water-based technique. Though not new in global automotive terms, its use by Ford in this instance is, Havlin confirms, a “first” for the company. The paintbooths themselves, he says, are entirely water-free. The emissions saved should therefore be in the order of 9,500 tons of CO2 and 35 tons of particulates particulate emissions on an annual basis. Water consumption on the same basis should be 10.5m gallons less than it would have been otherwise. Meanwhile, total energy savings should amount to 48,000MWh of electrical power.

Overall, therefore, it seems more than likely that the ability to implement this system worldwide – a fundamental principle in its development – is one that Ford will seek to exercise wherever it sees an opportunity.