The OEM has a new strategy for its range of vehicles, but familiar problems remain for its many brands 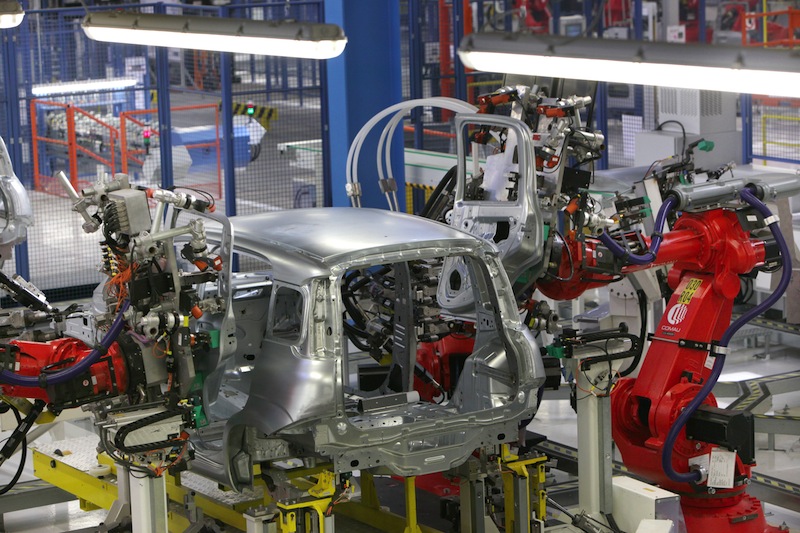 Since CEO Sergio Marchionne set out the new strategy for Fiat Chrysler Automobiles (FCA) earlier this year, some noteworthy developments have taken place. Firstly, rumours emerged in the German press of merger talks with Volkswagen (VW), with the latter reportedly seeing Chrysler as a route to quickly building its presence in North America. Fiat has denied that it will happen, but in the light of falling Q2 profits and weak performances in both North and South America, the possibility of VW making a bid for some or all of Fiat Chrysler’s operations cannot be entirely ruled out.

In a further turn of events, following a shareholder meeting in Turin, the new FCA has been re-cast under Dutch company law, despite its base remaining in London and it being listed on the New York Stock Exchange. Fiat is no longer Italian; Fiat Chrysler has been re-positioned as a global company.

The company’s current strategy, as outlined in May, focuses on slimming down the Fiat range, especially models based mainly on the 500 and Panda; boosting Maserati and Alfa production in Italy; and expanding the product range made in Brazil and Turkey. But just what is the potential for the success of these aims?

Fiat – slimming down the range
The Fiat brand is to be significantly restructured and different strategies will be applied in Europe, Brazil and other markets. Fiat will divide its models between what it calls the ‘emotional’ range (mostly those bearing the 500 nameplate) and the ‘rational’ range (those which have the Panda and, in some markets, the Punto badge). In Europe, the strategy calls for a modest rise in Fiat nameplate sales from around 600,000 in 2014 to around 730,000 in 2018.

The Fiat model plan has four pillars, with two of them – the 500 and Panda – at the centre of the group’s European plans. The third pillar is a new range of compact cars to be built by Fiat’s Turkish partner, Tofas, while the fourth pillar is a halo sports car – a rear-wheel-drive roadster – which will be built for Fiat by Mazda in Japan. The 500 nameplate will be extended to include a five-door version which will replace the Punto. This new model will be positioned between the current 500 mini car and 500L mini-MPV.

The 500-based Punto replacement (which is actually unlikely to retain the Punto name in Europe, as it will fall into the ‘emotional’ range) is expected to be made in Poland alongside the 500, at a rate of around 180,000 units a year – significantly less than the old Punto at its peak. The 500L will continue to be made in Serbia, while the 500 range will be completed with the imminent launch of the 500X small SUV; this will be made at the Melfi plant in Italy, alongside the Jeep Renegade, which will fit into the Jeep range below the Wrangler.

The Panda will continue to be made in Pomigliano in southern Italy and a wider range of models based on the Panda can be expected in due course. An all-new Panda is not expected until 2018, so it will be interesting to see how Fiat maintains sales momentum for the current Panda.

Meanwhile, new and slightly larger compact C-segment vehicles will be made in Turkey by Tofas. This will give Fiat replacements for the Bravo and Stilo; a compact crossover is also expected by 2017, predicted to be based on the next generation of the Fiorino mini-van. The current Bravo has been discontinued and the Lancia Delta will soon go the same way; Lancia itself will become a one-model brand, with just the Polish-made Ypsilon, sales of which will also be limited to Italy. How long the Lancia brand will actually be retained remains to be seen.

With the Mirafiori factory in Turin soon to be re-allocated to Alfa and Maserati production, Fiat brand models will be made in Italy (Pomigliano for the Panda and Melfi for the 500X), Poland (500), Serbia (500L) and Turkey (Fiorino
and Doblo vans and the new compact cars). The situation regarding the Cassino factory in central-southern Italy, which currently makes the Lancia Delta and Alfa models, is unclear. It is likely that it will make part of the new Alfa range, but the feeling among some analysts is that Fiat will still have at least one, if not two, more plants in Europe than necessary.

Marchionne has in the past called upon Europe’s vehicle companies to close plants to address the excess capacity issue. However, he has not been prepared to do this at Fiat in the past, nor, it would seem, in the future. 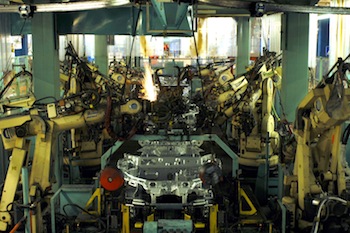 Fiat in the wider world
Outside Europe, Fiat is developing its huge Pernambuco plant in Brazil where it will make a range of models for the domestic market only, as well as providing a second production base for the Jeep Renegade.

It remains to be seen whether these vehicles will be based on the same platforms Fiat is developing in Europe, but some technology sharing with models to be made by Tofas in Turkey is certain.

In China, Fiat has a joint venture plant in Guangzhou which will focus on new Jeep models, as well as continuing to make the Fiat Ottimo and Viaggio models which are Chinese-market versions of the Dodge Dart. Punto and Palio models are also expected in China, alongside a D-segment sedan which will appear in 2016, moving Fiat into a segment in China in which it does not operate in Europe.

Alfa – bulking up the offer
Expanding the Alfa Romeo range and moving the brand into new segments is clearly at the centre of the new Fiat strategy. The plan is to invest €5 billion ($6.6 billion) and grow volumes to 400,000 a year by 2018, equivalent to more than a six-fold rise on the 74,000 units sold in 2013. Underpinning this ambitious strategy will be a range of new rear- and all-wheel-drive vehicles, with a large part of the increased volumes coming from SUVs and crossover vehicles. The small MiTo entry model will not be replaced.

New Alfa models have been promised for several years, but none has yet materialised and the first one under Fiat's latest strategy will not arrive until the end of 2015. This will be the long-awaited replacement for the Giulia, although it may not use this name. A conventional sedan will come first, with a sporty, CLS-style, four-door coupe also a possibility. Quite how far Alfa’s annual sales will have fallen by the time this first new model appears on the road remains to be seen.

Following the Giulia, there will be as many as seven more new Alfas between 2016 and 2018, a launch plan which is likely to stretch the brand’s management resources further than ever before, especially in view of the significant increase in sales volumes which the plan calls for. 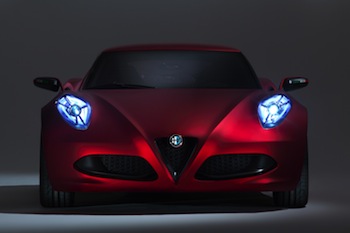 The new range will, in addition to the sedan replacement for the Giulia and its expected four-door coupe sister model, include the following: a compact replacement for the Giulietta in two body styles – a sporty sedan and a sport- back estate-like version; a large flagship model, effectively the long-awaited replacement for the 169, based on the Maserati Ghibli; a speciality sports car to rival the BMW 6-Series (also sharing underpinnings with Maserati); and two SUVs, one to compete in the same segment as the BMW X3 and a larger model mainly for the US market.

The SUV model will be based on the new Giorgio architecture which will also underpin the large sedan. This architecture is being developed by a 200-strong team of engineers at Maserati and will also, it is understood, provide the underpinnings for a number of Chrysler and Dodge models to be made in the US towards the end of
the decade. However, all Alfas will be made in Italy, at the Mirafiori plant at Fiat’s headquarters in Turin.

Maserati – delivering greater luxury
The Maserati range has traditionally been a low-volume, almost marginal brand producing 12-14,000 units a year at best, and far fewer in the lean years. Now, Fiat wants to produce 75,000 units or more, all in Italy, at Maserati’s traditional home of Modena and at the former Bertone plant situated at Grugliasco, near Turin. The new model plan calls for seven new Maserati models to be launched by 2019.

These will be: the recently-launched Ghibli sedan; a new Quattroporte sedan; the Levante SUV, due in 2015; a two-seater coupe, the Alfieri, due in 2016; a four-seater GT coupe in 2107; a cabrio version of Alfieri in 2018; and a new GranCabrio four-seater convertible in 2019.

This ambitious model plan will place Maserati in direct competition with the upper end of the product ranges offered by the German premium brands, albeit with a much smaller overall volume. It would indeed keep the Grugliasco and Modena plants fully occupied, with some models almost certain to have to be made at Mirafiori as the combined capacity of Grugliasco and Modena is well below Maserati’s annual 75,000-unit target. 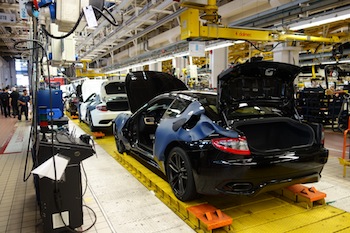 Maserati chief Harald Wester suggested that in 2013 the total volume for all of Maserati’s target segments amounted to just under 1m units; further growth in these markets is predicted by 2018, with Maserati expecting it to exceed 1m. As a result, the marque is effectively targeting a market share in these markets of 7.5-8%.

With a strong global economy and continued buoyancy in China and the US especially, this may be achievable, but any sign of a sustained downturn or slowdown and Maserati’s targets may well prove to be a challenge too far.

Ferrari – still special
Further up the market, there is of course Ferrari, the flagship of the Fiat group. Despite consistently strong demand, Fiat has said it will limit Ferrari volumes to a maximum of 7,000 units a year in the medium term in order not to risk any devaluation in the brand’s exclusivity.

There will be one new Ferrari model a year over the next four to five years, and Fiat claims this brand will achieve a 15% margin by 2018. This margin and the brand’s continued exclusivity imply a median brand value of €4.3 billion, with some analysts suggesting it could be worth as much as €5.4 billion. Longer term, if the number of high net-worth individuals continues to grow, Ferrari believes it could justify raising production volumes to 10,000 a year.

Light commercial vehicles
In parallel with the changes outlined above, Fiat’s light commercial vehicle (LCV) range (branded Fiat Professional) will continue to operate in Europe and will also supply vehicles to the US for sale under the Ram brand, supplied from Italy (Ducato) and Turkey (Doblo). Meanwhile, Fiat will source a van from Renault to replace the Scudo which previously came from a Fiat-PSA joint venture in France.

The new Fiat-Alfa-Maserati range and focus will produce a very different-looking entity if it is successfully executed. The spectre of a merger with, or takeover by, VW exists and cannot be dismissed even if the establishment of the new corporate structure for FCA symbolises the company’s confidence about its future.