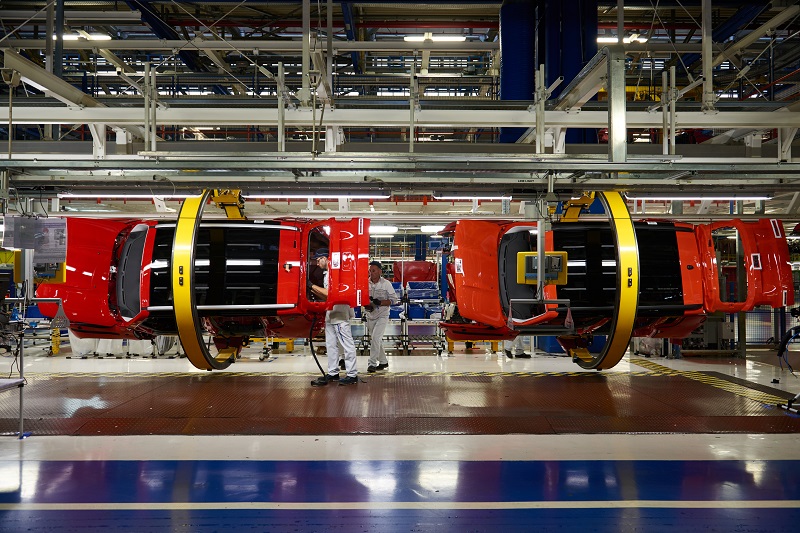 The workforce at Fiat Melfi in Italy gave a huge cheer when, back in 2012, Fiat Chrysler Automobiles (FCA) head Sergio Marchionne announced that the ailing plant was to receive a €1billion ($1.1 billion) investment to make two new models. The vehicles were related small SUVs, the Fiat 500X and the Jeep Renegade – new entrants into what is now the fastest-growing segment in Europe, if not the world.

The boost was sorely needed. The future of Melfi's 8,000-strong workforce, together with another 1,000 personnel at its attached supplier park, was in doubt after production slumped from a peak of 410,000 seven years previously due to declining European demand for its sole model, the Fiat Grande Punto.

The Jeep Renegade started production in August last year, followed two months later by the Fiat 500X. The two new models are built on an updated line, one of a pair originally used for the Grande Punto. The Punto continues to be assembled on the second line, though output is expected to be just 75,000-80,000 this year. The 4,000 assembly personnel are split 70:30 between the new SUVs and the ten-year-old Punto.

Getting close to capacity
The two SUVs are selling well and, at the time of writing, the plant had made more than 160,000 Renegades and 100,000 500Xs – and is forecast to make over 400,000 vehicles in total this year. The factory is running three shifts a day and plant manager Nicola Intrevado says it is now close to maximum capacity, making it the second-biggest FCA production facility after Betim in Brazil – and the largest for the group in Europe.

The welding shop is almost completely new, with 860 robots making around 5,000 welds to each SUV
The inclusion of Jeep was radical. “The real quantum shift was to start producing for an iconic American brand – to manufacture here for the US is the big challenge,” says Intrevado. “Before, we were much more linked to and dependent on Italy and Europe.” The Renegade is currently only made in Italy and 60% of the units produced are exported to the US. More than 90% of these are fitted with a 2.4-litre petrol engine that is imported from FCA’s Dundee, Michigan plant. Most of the remaining Renegade production (mainly diesel) is for the European market. Jeep’s planned new plant in China is likely to make the model for that region.

Spreading the investment
The €1billion investment has been spread throughout the plant. The press shop was perhaps the area to gain least, but it has benefitted from a new automatic discharge facility that uses robots to take stamped parts and put them on the racks, which is a manual process in many other plants. Press shop manager Gianfranco Cinquefiori suggests that Melfi is the first in the world to automate this process, which he says can be punishing work for people.

Other new additions are two robots fitted with a blue-light scanner and 3D camera to check for imperfections on the pressed parts. “If you play with the colour and intensity of light you can see flaws you couldn’t normally see, for example deformation, dots or problems with the steel,” he says. FCA estimates that it has cut 30% of steel usage from the Renegade and 500X compared with an equivalent car built using older methods. Cinquefiori says this has been achieved using stronger, lighter hot-formed steel (pressed at Fiat Mirafiori in Turin) on crash structures, while more precise pressing has allowed sharper lines and thinner steel on outer panels. He gives the example of the Renegade’s front wing, which is 0.63mm thick compared with 0.73mm on the smaller Punto.

“The real quantum shift was to start producing for an iconic American brand – to manufacture here for the US is the big challenge”
– Nicola Intrevado, FCA

Automating the paintshop
The body-in-white welding shop is almost completely new, although it was off-limits during AMS' tour. There, 860 robots make around 5,000 welds to each of the SUVs. AMS did visit the paintshop, which received €45m of the investment, according to its manager, Raffaele D’Onofrio. He says it is now one of the most automated paintshops anywhere, with 54 robots. All-new booths include underbody sealing (using ABB robots), primer and topcoat. All three models are given five coats, weighing 3.5kg per car, starting with a rust-coating applied by a cataphoretic process in a 200,000-litre bath.

The paintshop has a capacity of 1,600 cars a day which D’Onofrio says can be increased to 2,000 once they solve a couple of bottlenecks. The two topcoat booths are one such pinch-point, largely because of the demand for the two SUVs, but also because red and yellow are proving more popular than anticipated. Cars painted in these flat colours need to be run through the booth twice, resulting in an overall takt time of 90 seconds, compared with 60 seconds in assembly. So D’Onofrio is building a third booth and investigating a new process for red and yellow that will require only one pass through the booth. 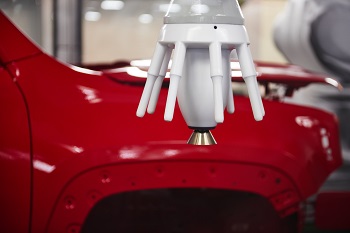 Colour changes on the topcoat robots can now be done in three seconds, compared with ten minutes in the old system
Changing colour
Paint changes on the Dürr topcoat robots can now be performed in just three seconds, compared with ten minutes for the old system, which also had 20 metres of paint pipe to clean – reduced to 15cm in the new system. That means cars can be sent down as they have been ordered, rather than in colour batches of 20-30 as before. Each machine is also monitored for its electricity use, which is important when the electricity bill for the paintshop is more than €50,000 a day.

Half of the plant’s 8,000 employees work in Melfi’s 160,000 sq.m assembly hall, including just over 3,000 on the Renegade/500X line. The flexibility of this line is important, notes assembly manager Ennio Meccia: “We designed [it] from the very beginning to be completely flexible on models, option mixes, engine and transmissions”. FCA says the line could take up to four separate models.

The line workers are helped by touchscreens at each of the 48 stations on the two trim lines. These indicate exactly which model and its specification is next in-line, for example a Jeep Renegade 1.4 for the US market with ‘sinistra’ (left-hand drive). Any unusual options, for example a full-length glass roof, are announced with a loud, electronic trumpet fanfare to alert the line-workers. The touchscreen also has a button to call the team leader in case of a problem – and if the leader canot solve it within 60 seconds, the moving floor carrying the cars is halted. Moving floors are unusual in Italian factories, says Meccia; its installation here was a suggestion from the Punto workers.

Being flexible in assembly
Another big investment in the assembly line was the post-trim shift to a rotating hanging system to transport the cars, giving better access to the underbody. This system from Dürr’s Italian operation, CPM, runs into the automated engine marriage line. This caged double-height structure is becoming a common sight at newer FCA plants and is beautiful to watch. This so-called flexible decking line takes just 54 seconds to match the body and powertrain, and the accuracy is helped by cameras that measure the position. Arms grasp the front suspension struts below the springs to gently pull them into position and then the car moves off to have the bolts automatically tightened by robots at some of the assembly shop’s 278 automated fastening stations.

In the UK, Nissan has been boasting that its half-million production in Sunderland last year was more cars than Italy made as a whole in the same period. With Melfi likely to produce four-fifths of Sunderland’s total this year, it has put Italy’s once-proud automotive industry back on the map.

Practising in the Pilotino
Melfi benefitted from what is now become a key feature of new FCA plants – the pilotino, or pilot plant. In Melfi, this is an 18-station assembly area built in advance of starting the new high-tech SUV line to test out the ergonomics and train personnel. Assembly manager Ennio Meccia calls it a “kind of gym” designed to help improve the efficiency of individual stations. He says workers were actively consulted about improvements that could be made from the old Punto line.

The process was started in 2013 when 80 specialists from the plant were sent to Turin and Detroit to study different assembly layouts and come up with suggestions. FCA made heavy use of simulation and virtual design for the line, to create the right balance between speed and ease of use to raise takt time and keep workers safe and healthy. With the SUV line now up and running, the pilotino is now used to train new staff.

AMS: The plant fell into decline producing the Punto, such that you had to make temporary lay-offs. It now has the highest output of any FCA plant in Europe. What has contributed to this new success?

Nicola Intrevado (NI): This plant was successful before, but in 2013 and 2014 we had to renew the plant and production process to make all this happen – that was the reason for the temporary lay-offs. They ended in December, and as of January everybody came back. Since January, 1,800 people have rejoined.

AMS: When will they become permanent?
NI: As of now, I can’t confirm that, but I’m optimistic that this will happen.

AMS: How was the €1billion [$1.1 billion] investment in Melfi split?
NI: The body-in-white area is totally new, the Jeep/500X assembly is totally new and water test is completely new; also, there has been investment in paint. There has also been an improvement in a press shop – the new automatic discharge is totally new.

AMS: How long will you continue to build the Punto?
NI: For sure, through 2016 we will continue the Punto. This is a very successful car and we will produce a bit less than 100,000 this year. 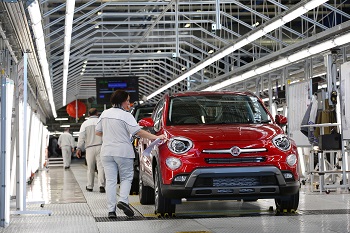 Fresh investment has revived Fiat Melfi to the extent that the plant is now operating nearly at maximum capacity
AMS: You have a railhead in Melfi – how many cars do you send by train?
NI: More or less 600-700 by train and 800 by truck a day. Two trains every day go to Civitavecchia close to Rome, our shipping hub to Southampton in the UK and Baltimore in the US.

AMS: You say you are close to capacity. What happens if you need to make more of the Renegade and Fiat 500X?
NI: Originally, the plant had a planned SUV production rate of 1,050 a day at end of refurbishing. Then we moved to 1,100 then 1,200 – I think I’ve already increased enough versus my original plan. With Punto it’s 1,500 a day. We are the only FCA factory that does 20 shifts a week.

AMS: How did you achieve that extra increase?
NI: In welding, we inserted new robots in August. Assembly speed was increased and we have new roller-testing facilities.

AMS: What percentage of parts comes from Italy?
NI: About 65-67% from Italy and from the supplier park it’s 20%. I wouldn’t like to increase that – 20 is already a high percentage. In a 2km area I have 20%, [in] 150 km that percentage is 40%. This is important. We get engines and gearboxes from our plant in Termoli plant [on the coast north of Melfi].

AMS: How has carmaking changed for you?
NI: The big difference is that now we are selling to the entire globe. But from my perspective, there is no real difference. I need to produce cars that work. That’s my objective. No matter which markets I need to serve, for me a customer is a customer.