Fiat heading for a cleaner horizon 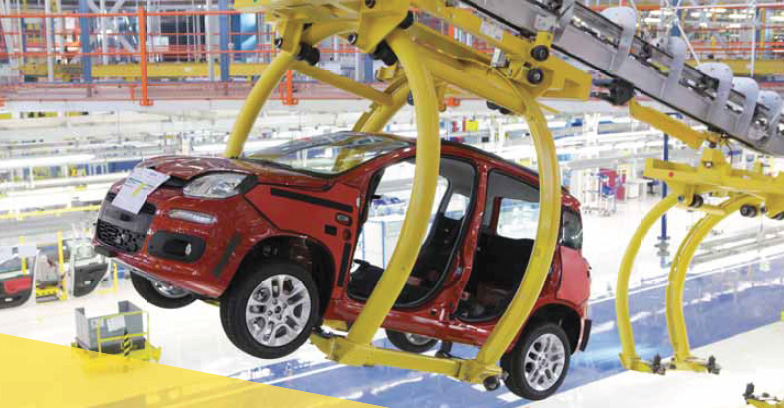 With multiple production plants in Europe and the Americas, and with joint venture facilities in Russia and China due to come on line later this year, Fiat Group’s manufacturing footprint is becoming ever more global. Therefore, the company has developed a leading management system that addresses, at source, the environmental impact of all its production facilities.

The firm places particular emphasis on restricting greenhouse gas emissions; managing waste generation and disposal; and conserving energy, water and materials. The Group has set out and maintains strict guidelines, which specify the correct approach to all environmental issues to be adopted by its employees at global production plants. In 2011, spending and investment environmental matters amounted to €137 million, of which 63.8% was for waste disposal, emission treatment and remediation costs and 36.2% for prevention and environmental management costs. Fiat began implementing its world-class manufacturing (WCM) system earlier this decade. By the start of 2012, 106 plants had adopted the protocols of WCM, these accounting for over 97% of the total manufacturing cost base. Under WCM, all activities must meet the following objectives: zero accidents, zero waste, zero breakdowns and zero inventories. Traditional reporting is replaced by cost deployment, so that standardised methods and tools involve the entire organisation, enabling planning and the prioritisation of any corrective actions.

The after-effects of the Tsunami in Japan, as well as the flooding in Thailand has naturally caused Fiat to look hard at the risks for its own manufacturing operations, wherever they are located. The firm has improved its planning for any environmental accidents or natural disasters which could affect its production facilities (e.g., hurricanes, floods, earthquakes, fires). All plants are now covered under a contingency plan whose purpose is to not only limit the environmental impact of just such a disaster, but also to preserve the integrity of any physical assets, as well as maintain the continuity of operations and limit any financial implications of a production hiatus. The management of environmental protection at Group plants is maintained via an internal organization. Senior environment, health and safety (EHS) managers not only oversee environmental activities at individual sites, but are also in charge of monitoring national and local legislation, as well as rules and regulations related to environmental matters.

Fiat believes the complete implementation of the Environmental Management System (certified according to ISO 14001 by accredited third parties) to be the best means for achieving a steady and constant reduction of the impact of manufacturing processes.

In 2011, the energy management requirements of the new ISO 50001 standard were integrated into the Environmental Management System, while six plants with high energy requirements (accounting for 5.5% of the Group’s total consumption) attained certification. Fiat has committed itself to ensuring that by 2014, all of the Group’s main plants, accounting for more than 90% of total energy consumption, will be ISO 50001 certified.

Like its rivals, Fiat Group has made a binding commitment to reduce VOC emissions into the atmosphere from its plants’ paint operations. Emissions have fallen from an average of approximately 79.3 g/ m2 in 2004 to around 30.1 g/m2 in 2011 (-62%). At a Group level, last year, Fiat reduced VOC emissions to a worldwide average of 43.0 g/m2 (-34.2% over 2007) and to a European average of 26.0 g/m2 (-48% over 2007). Much of that progress stemmed from continued improvements in environmental management practices and the introduction of equipment upgrades to reduce paint use. By way of comparison, Fiat’s own data shows that in 2011, the VOC emissions at Chrysler Group plants worldwide dipped by 3.1% over 2010 to an average of 18.9 g/m2. 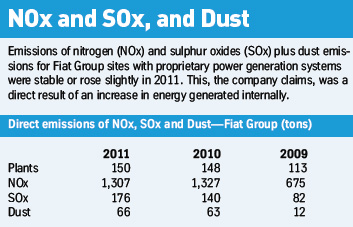 Due to the demand for ground and surface water, water resource preservation remains a highly sensitive topic for the automotive industry, with water scarcity also exposing companies to business risks. Addressing this issue requires ongoing action to reduce overall water consumption and ensure the high quality of discharged water.

In 2011, specific water management guidelines were developed and distributed within Fiat Group (excluding Chrysler). Not only do they provide the principles for sustainable management of the entire water cycle, but these guidelines also stipulate the technologies and management actions aimed at maximising recycling and reuse and minimising the discharge of pollutants.

In addition to having developed its water management programme, last year, Fiat identified 13 plants located in areas where water may be considered a limited resource. These plants then undertook appropriate measures to improve water reuse and recycling, with the company planning to assess progress later in 2012.

According to Fiat, water discharged from Group plants worldwide in 2011 was maintained well within regulatory limits. Analyses conducted on water discharged from FGA plants worldwide revealed levels of chemical oxygen demand (COD) at least 89% below regulatory requirements, while levels of biochemical oxygen demand (BOD) and total suspended solids (TSS) were at least 68% and 55% below required limits respectively.

Fiat Powertrain uses the 5R methodology to reduce the environmental impact of waste generated. Priority is given to activities that rethink manufacturing cycle processes in order to avoid waste generation. The methodology is based on five pillars:

• Redesign process and product in order to eliminate all materials not essential to the purpose, thus avoiding waste generation in advance. When this is not possible, the following hierarchy applies:
• Reduce the waste generated
• Reuse the waste, identifying a new application for it within the manufacturing cycle
• Recycle the waste generated, and lastly
• Recover the waste for which none of the above methods is applicable, by sending it to final treatment

With the increasing scarcity and cost of water and of wastewater services, rainwater harvesting is becoming more environmentally and economically viable. Chrysler Group is leading the way for the firm’s alliance with Fiat in this area, thanks to an innovation at the Dundee engine plant. This facility in Michigan has implemented an innovative project to collect rainwater and mix it with purchased water in order to reduce municipal water usage. The rainwater collected is now used for cooling in the manufacturing process.

When waste generated cannot be recycled or reused, Fiat mandates that it is disposed of, seeking to use technologies with minimal environmental impact (waste-to-energy conversion or treatment, with shipment to landfills only as a last resort). Furthermore, the Group closely monitors the level of hazardous waste produced during manufacturing processes, in accordance with the applicable legislation in each relevant country.

Specific guidelines on waste management are to be drawn up and distributed later this year, according to a corporate statement made by Fiat in April 2012.

The firm’s 2010–2014 Environmental Plan includes ambitious targets related to waste at plants with a particular emphasis on total waste per unit, hazardous waste per unit, waste recovery rate and rate of waste sent to landfill. In 2011, the increase in production volumes for some sectors resulted in a corresponding increase in total Group waste generation; however, thanks to proper environmental practices, hazardous waste decreased by a claimed 18%. 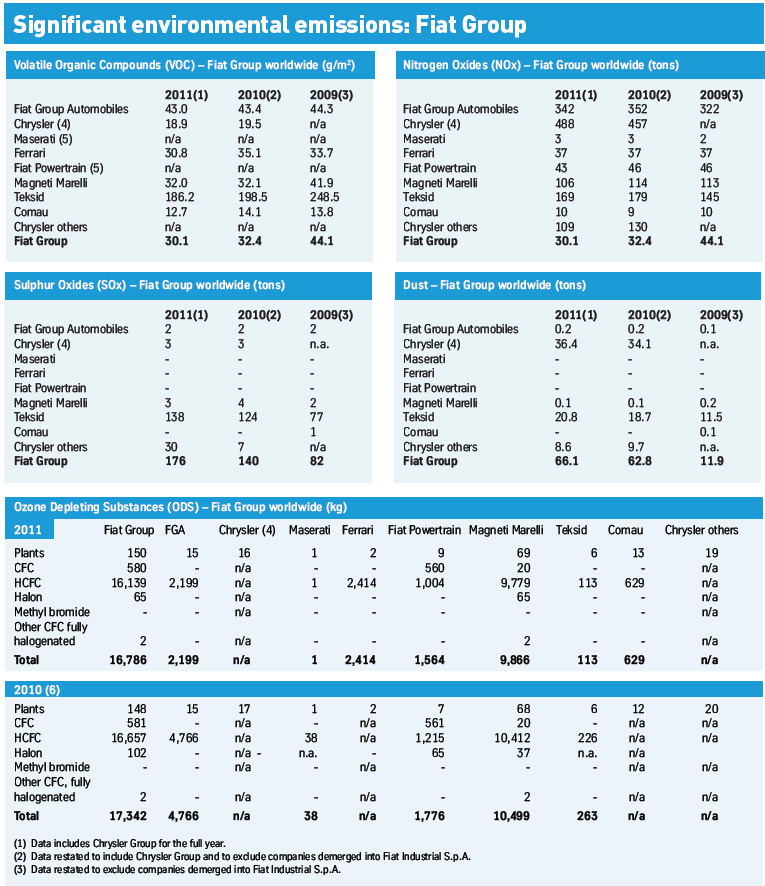 Electrical equipment such as transformers use cooling liquids that contain Polychlorinated Biphenyls (PCB) and Polychlorinated Terphenyls (PCT). These substances are classified as hazardous and are subject to restrictions relating to their use, production and sale. This, however, varies from country to country. In Fiat’s case, the company says it has for many years worked towards the progressive elimination of these substances ahead of regulatory deadlines. As a result of the latest actions implemented in 2011 at the Group’s plants, the company has recently reported that PCB and PCT are no longer present at its manufacturing facilities.

During 2010, which was the United Nations General Assembly’s International Year of Biodiversity, Fiat Group, in association with the department of life sciences and systems biology at the University of Turin, defined both a specific Fiat Biodiversity Value Index (FBVI) and guidelines for its application across the company. This index measures the level of biodiversity and influencing factors for areas surrounding plants. This is so that it can identify, and give the proper priority to any action that might need to be taken to protect and/or restore the local environment.

The methodology of FBVI is defined by two parameters, the fi rst of which reflects the level of biodiversity found in the area which surrounds a production plant. This is measured through the analysis and assessment of specific indicators such as aquatic and terrestrial ecosystems. The second parameter, meanwhile, measures the level of environmental pressure based on human activity in the area. This is typically in the form of agriculture, industry, and/or urban expansion.

Fiat originally applied FBVI at two locations in Italy: the Fiat Powertrain plant in Verrone and the Magneti Marelli plant in Venaria, but in 2011, the methodology was extended to the Fiat Group Automobiles Serbian plant in Kragujevac (where the new Fiat 500L will enter production later in 2012).

The initiatives implemented at the Verrone and Venaria sites in Italy were assessed in order to defi ne a new action plan, and Group guidelines are now being applied to all adjacent sites or sites located in protected areas or areas with great biodiversity. Following Fiat’s initiatives, Chrysler Group has implemented targeted actions at the Toluca (Mexico) assembly and stamping sites. As these plants are located in an area which is only 13km from the Ciénegas de Lerma wetland, during times of heavy rain, treated wastewater, which had previously been used for irrigation, is now sent to the Lerma River, replenishing the wetlands.

A recently announced goal set by Ford Motor Company calls for the company to lower the amount of water used to make each vehicle by 30% globally. The firm has set 2015 as the target year, with water used in 2009 as the comparative parameter.

Ford is also using new technology to reduce water use. One example has been a project undertaken in Australia, where evaporative cooling towers at the Geelong engine plant in the state of Victoria were replaced last year with new, highly efficient coolers. The company claims that these use up to 80% less water than traditional towers. The principle employed in Geelong is one of hybrid dry coolers that use air for cooling during cold and moderate seasons, with water used only during the hot summer season.

One of Ford’s highest growth markets is India, where the environmental challenges are particularly tricky, water being a case in point. In most Indian states, the relevant authorities require manufacturers to achieve zero liquid discharge in their operations, so as to encourage them to both reuse water and reduce the total volume of water used. The Maraimalai Nagar plant Chennai, which builds the highly successful Figo small car, looks likely to achieve the target that Ford India has set for itself by the end of 2012. If it does indeed attain the goal of zero liquid discharge, it will be thanks to an innovative process that treats the plant’s wastewater and recycles it back into our manufacturing processes.

Under the Ford system employed at Maraimalai Nagar, wastewater streams from the assembly and engine plants are each pre-treated then mixed with sanitary and cafeteria wastewaters. After a process of biological treatment, the combined stream passes through media filtration and activated carbon before undergoing ultrafiltration. This, the final stream, is then sent to a three-stage reverse osmosis system, the result of which leaves a large volume of salt-free water as well as a small volume of concentrated brine. The final part of the process sees the water in the brine boiled, condensed and reused in the plant, with only a solid salt remaining.

Thanks to the water-saving actions, Ford says its Indian plant now has one of the lowest water requirements of any its major global facilities (1.16 cubic metres of water use per vehicle produced). Where India has taken the lead, so now other Ford plants in the Asia Pacific region are reducing their own water needs, the company states. In China, the Chongqing Assembly Plants 1 and 2, which operate as part of the Changan Ford (CFMA) joint venture, have established water reuse capability.