Increased vehicle production in China has led suppliers to stengthen their presence there too, with the enouragement of the OEMs 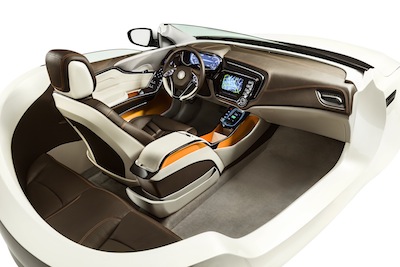 The rapid growth of Chinese production by global vehicle manufacturers has been one of the most notable trends in the automotive industry in recent years; for example, Volkswagen has opened plants there on a regular basis in association with a number of local partners. Coming late to the game, Renault has formed an alliance with Dongfeng, a shareholder in its domestic rival, PSA. Geely, a relatively new Chinese vehicle company, has chosen to acquire developed vehicle expertise by buying a car company, Volvo, and accessing similarly mature suppliers by this same route.

While these car companies, and many more besides, have established new operations or expanded existing ones, they have also encouraged their suppliers to follow them to China. The major interiors suppliers have been at the forefront of this trend, especially Johnson Controls (JCI) and Faurecia. These companies have moved into China largely at the behest of the carmakers, whose initial encouragement to get their established suppliers to come to China was driven by local content rules.

As local content regulations have been progressively relaxed in recent times, the more recent motivation has centred on vehicle manufacturers’ desire to shorten their supply chains and have similar supply arrangements in China as they have in the rest of the world. In addition, there is the longstanding problem of finding indigenous Chinese suppliers who have both the R&D capabilities and the manufacturing quality of their developed world counterparts.

JCI expands still further
With 16 automotive interiors production facilities and three technology centres in China, JCI is almost certainly the largest western tier one interiors supplier in China. The company has nearly 70 assembly plants across its automotive platform, including seats, headliners, carpets and exterior trim operations. In its most recent move in this area, JCI has formed a joint venture with SAIC’s Yanfeng interiors subsidiary, in a deal said to involve worldwide revenues of $7.5 billion.

Yanfeng Automotive Trim Systems is actually a subsidiary of Huayu Automotive Systems, which is in turn the component holding company for SAIC. Yanfeng and JCI first worked to together back in 1997, and so the creation of the interiors JV is the latest development in a long-established relationship.

It is understood that the JV has been established without any cash exchanging hands; rather it has been completed by way of asset contributions from both sides. On a revenue basis, the JV will create what is claimed to be the largest automotive interiors company worldwide. Yanfeng is the senior partner, with a 70% stake, while JCI holds the remainder. The two companies’ tie up in interiors was described by JCI as “a natural extension of (the) very successful existing partnership… in automotive seating”.

Outside this new partnership, JCI has close to $5 billion of sales in China and employs more than 25,000 personnel across its own business and its JVs. The deal with Yanfeng enables JCI to remain in the interiors segment without having to invest significantly. Moreover, it enables the company to spin its interiors operations into a non-consolidated unit which will not draw close attention from investors who dislike the very small margins typically achieved in the interiors segment. According to JCI’s CEO, Alex Molinaroli, the JV should be profitable from the outset and achieve a net income margin of 6%.

• A JV with Chongqing Yanfeng in Chengdu, established specifically to supply new and expanding Volvo operations in the country. This JV will supply seating, headliners, floor console carriers and a number of logistical support services to the OEM. The facility began operations in late 2012, delivering parts for the Volvo S60L, a derivative only made in China
• A JV with Shanghai Yanfeng to deliver seating mechanisms across China, including tracks, recliners, adjusters and latches. These Chinese operations now benefit from the acquired global expertise and experience of C Rob Hammerstein and Keiper in seating structures. The JV supplies most of the major car companies in China with seat structures
• A 50:50 JV with vehicle-maker Chery to supply the latter with seats
• A JV with Guangzhou Automotive Components (GACC) to supply interiors to vehicle plants in southern China, including ones operated by Honda, Nissan and Toyota
• A JV in automotive fabric with Zhejiang Wanfang in Haining City. This fabric warp knitting operation, which opened in 2013, supplies both JCI’s operations in China and other companies worldwide.

As well as following the French, German and US vehicle companies into China, Lear has encouraged sub-suppliers to follow it into China. For example, Brose has a number of production facilities in the country, including in Changchun, from where it supplies Lear with seat adjuster mechanisms.

Lear is much less vertically integrated than JCI, which can supply most of the mechanisms it needs in China from its own factories. Lear lacks this capability not just in China but across the world, hence the need to bring tier two suppliers like Brose into China to support its seat contracts. Lear itself supplies completed seats using Brose adjusters for Audi and PSA models made nearby.

The third major North American interiors company in China is Magna, which is less well represented there in interiors than both JCI and Lear. Most of its activities in China, and indeed Asia as a whole, focus on metal pressings and powertrain operations, although it also has a JV in injection moulding and painting in Wuhu.

In this last partnership, Magna holds a 51% majority stake, with the balance held by Changshu Automotive Trim (34%) and Chery (its principal customer) holding 15%. The company first became involved in seat mechanism production in China back in 2006 through a 50:50 JV with the Korean company DAS, a major supplier to Hyundai and Kia.

Faurecia’s fortunes on the up

Also present in China is French company Faurecia, which last year announced plans to double its business in the country by 2016. Having won contracts worth more than €2.3 billion ($3.1 billion) in 2012 and achieved sales of €1.5 billion in that year alone, a formal strategy to grow and maintain its business in the country was clearly required. Faurecia set out its targets and the context for these objectives in the Chinese market as follows:

– Despite the global economic uncertainty, the Chinese market is expected to continue to grow steadily, with production volumes in the country predicted to rise from 16m to 25m between 2010 and 2016

– Production in the premium segment in China is expected to grow faster than the market as a whole, especially through the expansion in China of Audi, BMW, Mercedes, Volvo and Jaguar Land Rover’s JV with Chery

– More than 90% of Faurecia’s business in China is with global vehicle companies, and while this business is expected to be maintained, Faurecia also plans to grow its business with domestic brands, especially Chang’an, Geely and Great Wall. By 2016, business with domestic brands is expected to reach 12% of the company’s revenue in China. In 2012 Faurecia started supplying seats to Great Wall for its SUVs and this contract is due to be extended to cover other interior parts, and also exhausts. Additionally, Faurecia enjoys strong business in the country with BMW and Mercedes plants

– Including exhaust systems, the company plans to grow the number of its operational locations in China from 35 in 2013 to 55 in 2016. It will also double the number of its engineers in China to 1,200, most of whom will work in Shanghai in seating, interiors and some exterior components. The company has a second technical centre, also in Shanghai, for emissions products.

This strategy is expected to see revenue from China rise to around €3.4 billion by 2016. As with JCI, much of this revenue is expected to come from JVs as opposed to wholly-owned Chinese operations.

Faurecia’s recent JVs and wholly-owned operations
– A new facility in Wuhan, to operate alongside the company’s existing two operations in the area; these are a JV with GSK of Taiwan in which Faurecia has a 51% stake, and a wholly-owned operation. The new operation will supply seat frames and complete seats for the Dongfeng PSA JV and a local Nissan plant

– A new seat mechanisms plant in Yancheng; this €30m investment in 2011 was established with the capacity to make up to 4m sets of mechanisms per year.