The design and manufacturing of tyres is changing with the introduction of new processes. Michael Nash reports 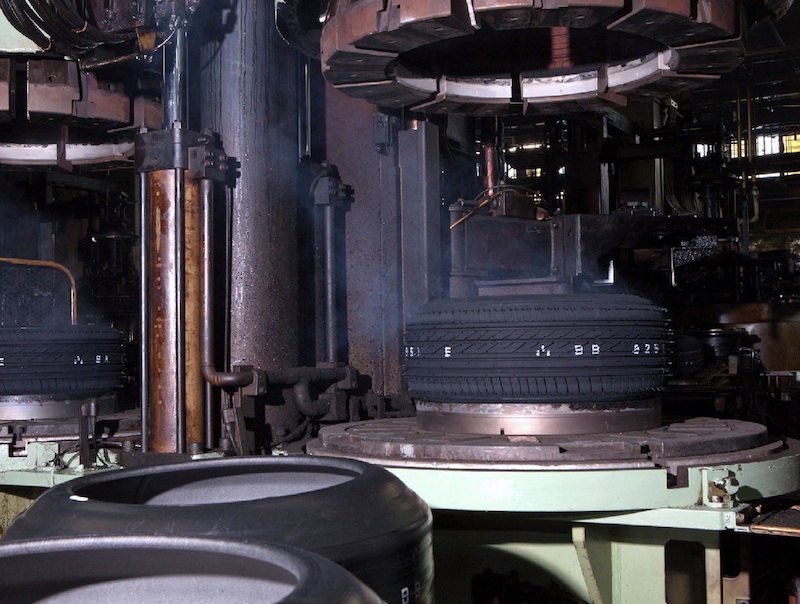 Tyre manufacturing processes have been relatively standardised across the automotive industry for many years. Chemicals are mixed with natural rubber to form numerous components, which are then pieced together on a drum before being cured in a press under heat and pressure. The finished product is then subject to several tests to ensure uniformity and balance.

With these tried and tested processes firmly in place, tyre manufacturing facilities have remained relatively unchanged. However, Sumitomo Rubber Industries (SRI) is breaking the mould by implementing its 4D Nano Design technology and its Neo T-01 manufacturing process. Development of the design technology was completed back in October 2015, but the company’s subsidiary Falken Tyres is now using alongside the new production process it to make its Azenis FK510 high performance tyre.

Falken Tyre Europe’s chief operating officer Markus Bögner sits down with AMS to provide some more information on the tyre and the manufacturing processes that are used to make it.

Can you go into a bit more detail about what 4D Nano actually is and how it works?

Essentially, 4D Nano Design technology allows us to simulate the complex interactions of tyre compound components down to nano-level. It utilises the world’s highest energy synchrotron radiation facility and earth simulator supercomputer, normally used for climate change, and other state-of-the-art equipment to perform highly advanced material simulations and analysis. We can then significantly improve the molecular bonds between components and reduce development times.

You have talked about the way in which the tyre is designed, but does manufacturing play a part?

Yes of course. SRI has developed a manufacturing process called Neo T-01. This process has completely changed the way in which Falken now manufacturers its tyres. Each component of a tyre is assembled using a metal core made from the exact shape and size of the actual tyre that will be produced. Essentially, what this does is guarantee a consistent quality of all tyres. Since we have implemented this process, we have seen uniformity improve by up to 70%, tyre weight reduced by 10% and deformation under high centrifugal force decrease by 50%. Overall, we have taken tyre manufacturing precision to a whole new level which has positively impacted the performance of our tyres.

What kind of assembly process did you use before the ‘metal core’?

Traditionally, the carcass, bead and tread were separate assembly processes before being put together on a larger drum that had an additional process to then shape and form the tyre. Using the metal core means the tyre keeps it shape throughout the entire assembly process, whereas previously, traditional technologies require that components are flexed in the middle of the process. This helps to make a more consistent tyre with a comfortable ride. The Neo T-01 process is also more automated, as previously, applying the breaker tread required human intervention. This means that we can use stronger materials during production, which makes the tyre less prone to deformation on the road.

Has the mixing of raw materials for tyre manufacturing changes over recent years?

New materials such as functionalised polymers or new generations of silica need better control of temperature, inner pressure, speed and other parameters. New intermesh mixer technologies are necessary to produce compounds with a very low rolling resistance, which is often a requirement from OEMs looking to improve fuel economy.

How do you control these parameters?

We use a computerised control system to control the build-up of the tyre, which is accurate to 0.01mm. This means only the material needed is added, offering weight reductions of 10%, and that elements such as the tread are laid down to within 1/100mm. Using the metal core vastly improves a tyre's degree of circularity, which in turn significantly reduces tire vibration at high speeds by as much as 70%.

What are the main factors pushing development of new tyres at Falken?

The principal driver in the development of tyres are vehicle manufacturers. The diversity of tyres you now get, as well as the demand for winter and all-season tyres, was heavily driven by the car industry. Tyre labelling, which has been in place since 2012, only represents a small fraction of the properties and is not the prime factor in tyre development. Ultimately, any tyre development effort is huge but with the margins often being small. However, gaining a reputation for tyre development and performance means that we can offer marked OE tyre propositions for premium car brands. This hopefully equates to increased consumer loyalty towards the Falken brand down the line.

What can we expect from the future of tyre development?

In general, what I think you will see from the tyre industry are products that are increasingly safer and are able to achieve a higher functional and environmental performance. This is no different with Falken. In terms of upcoming products, SRI is currently developing its Smart Tyre Concept, which is composed of three major technology categories: Safety Technologies to support greater safety, Enasave Technologies to make positive contributions to the environment, and Core Technologies to support all of these efforts through the utilisation of cutting-edge simulation and analysis.

Going forward you will see from Falken tyres that act as sensors, adapting to road conditions and sending information to the car on how the performance of tyres change over time. Airless tyre technology is also another developmental area we are working on and undoubtedly other manufacturers will be too. All of these technological solutions will all be in the context of making the industry greener. We have already developed a fossil fuel-free product and that is something you will be seeing a lot more of; environmentally friendly alternatives and materials. Overall, the tyre of the future will be safer and have increased levels of performance with a reduced environmental impact.