As OEMs bring out more electric vehicles, AMS investigates the power behind the wheel 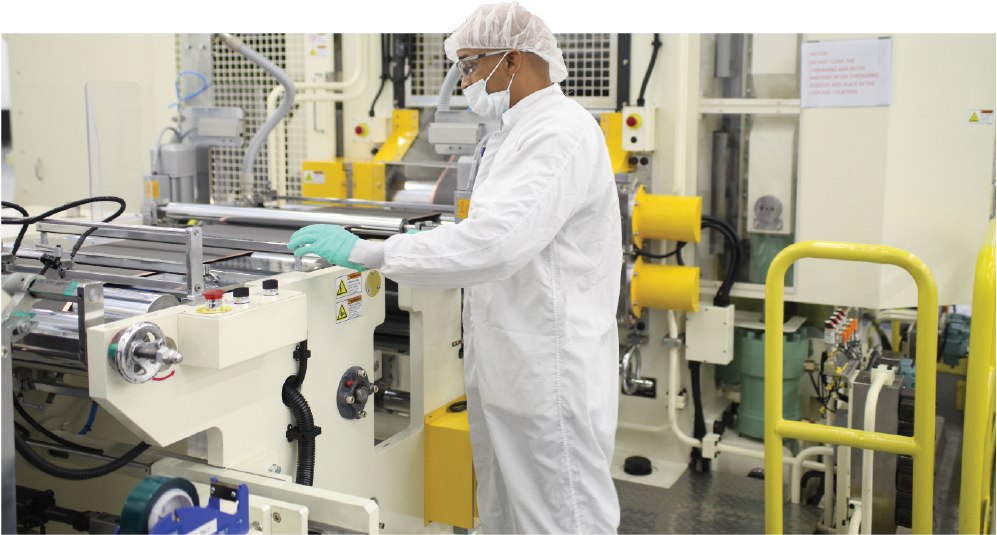 Electric vehicles (EVs) have certainly come a long way from 19th century prototypes and small 20th century models such as the Enfield 8000. Following the success of the LEAF, Nissan recently announced plans to introduce its second pure EV, the eNV200, next year. Also in 2014, BMW will begin producing the hybrid i8 sports vehicle alongside its all-electric i3.

EV technology is increasingly mature, production processes have been established and there is a growing appetite among consumers for ‘green’ vehicles, encouraged by emissions-based regulations and taxes.

All major vehicle OEMs are now involved in EV development and are partnering with companies which can develop and manufacture the high-voltage, lithium-ion batteries that are required to provide some or all of the vehicles’ power. In June this year, Mitsubishi partnered with Robert Bosch and GS Yuasa, while Panasonic recently invested $30m in Tesla Motors.

Principals of production
According to Jeff Kessen, director, automotive marketing, at A123 Systems, which is a supplier to BMW and GM among others, the production of automotive lithium-ion batteries is similar to consumer electronics, except that it involves different active materials and the batteries are “typically larger in size”. Those chemistries are often lithium-ion phosphate, lithium NCM (nickel, cobalt, manganese) or lithium titanate.

Kessen explains that the first step in the manufacturing process is to coat the cathode material, in solvent form, onto aluminium foil and the anode material onto copper foil, covering both sides evenly. After drying, the electrode rolls are cut into sheets or strips. The former are then stacked “like a sandwich”, alternating the cathode and anode, while the latter are rolled up into a ‘jelly roll’ (for cylindrical battery cells).

These processes take place in a dry room with very low humidity. “It’s also a clean room, so particle size in the air is very tightly controlled,” states Kessen, adding that people who are new to this environment often compare it to a pharmaceutical production facility; even visitors from a lead-acid background “typically note the level of cleanliness in a lithium plant”.

The stack or roll of electrodes is then inserted into the battery packaging and electrolyte is added. If packaged in hard metal, the cells are often sealed by laser welding, says Kessen, while pouch cells are sealed by pressing together at high temperature the edges of the surrounding aluminium foil, coated with polymer on both sides.

Once the battery is sealed, a process called ‘formation’ takes place. “Before formation, all the active materials are inside, but the battery can’t store any energy yet,” explains Kessen. Formation initiates the chemical reactions which cause the unit to function as a battery.

The battery then undergoes an ageing process under specific conditions, such as time and temperature, in order to provide a range of quality checks, says Kessen. Finally, the battery is run through end-of-line tests to measure the final voltage, capacity and other key characteristics.

According to Kessen, the fundamental requirement for lithium-ion battery manufacturing is “definitely a clean environment”, one that particularly avoids metal contamination, which can cause both performance and safety issues in service. During the cutting of the coated foil, it is possible for a burr to be formed or for a loose piece of foil to enter the system. Kessen says that preventative maintenance of cutting tools to ensure clean edges is therefore “pretty important”.

In the dry room, personnel wear special suits like workers in a paintshop, “not so much for the protection of the employees, but for the benefit of cleanliness in the product”, states Kessen. He says there is little risk to the workers from the corrosive materials in the electrolyte.

However, the dry room is a difficult environment in which to operate, containing “very aggressive” drying equipment to control the humidity; moisture is another element which needs to be excluded. At A123, workers are required to leave the dry room every few hours in order to rehydrate with a certain amount of fluid. [sam_ad id=17 codes='true']

While EV batteries have received some negative publicity owing to a number of fires while in service, Kessen says the fire risk on the production line is “not a particularly strong one”, although electrolyte is flammable.

Rebecca Trengove, marketing and corporate affairs manager at Johnson Matthey Battery Systems, says the risk of fire or electrocution during the assembly of live electrical parts can be tackled through “preparation and working with minimum voltages for as long as possible”. Where higher voltages are introduced, she says the process needs to be “very tightly controlled”. Electrical isolation must be applied throughout transport and storage, along with all appropriate risk assessments.

Johnson Matthey has so far focused on battery manufacture for the higher end of the market, working with Jaguar and Rolls-Royce. According to Trengove, the important steps for high-quality battery production begin with the selection of cells, “the biggest component of an automotive traction battery”. Cells for EVs are not necessarily suitable for plug-in hybrids. 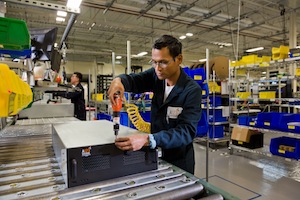 Trengove says the design for manufacture (DFM) stage also needs to include the battery management system (configured for the cell chemistry) and the thermal management regime. The traceability of components, the accountability of personnel and validation and testing are all key aspects of the production process.

Automation high but on the increase
A significant enabler in making batteries of high quality is automation, although the level of this depends on the manufacturer and the production volume.

“Generally speaking, there is a high degree of automation, particularly in the stages before the cell is sealed,” says Kessen. This is when there is a risk of contamination by metal or moisture. The dry room needs to be so low in humidity that the breathing of the workers “is a source of the problem”, Kessen explains. A123 therefore uses automation to reduce the number of personnel in the dry room.

Kessen adds that during battery assembly it is important to treat the delicate electrodes carefully. “We are using machines to handle the electrodes, rather than people. It’s cheaper to use people, but the reliability of the product suffers when you do that.” After the batteries are sealed they can be treated like any other component and automation depends on conventional manufacturing economics which govern handling efficiency.

In Trengove’s opinion, consideration of how battery production processes can be automated “should be given at the design stage”. 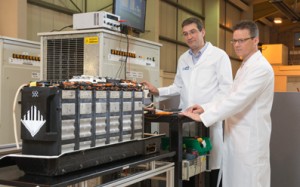 Future production trends
Trengove points out that the automotive battery industry is still developing and that automation will become “a more sensible option” when volumes increase.

From Kessen’s point of view, although automation is “already at a very high level” there is still scope for it to increase during final assembly of the finished system which is installed in the vehicle, largely because the production volume of any particular EV “doesn’t really justify a fully automated assembly line for the last stage of the process”.

Trengove suggests that the feasibility of automation will increase in conjunction with a move in Europe to harmonise the current variety of battery cell sizes and formats. This lack of standardisation is one factor which is hindering high-volume production. “However, the main requirement is increased market demand, which could create economies of scale,” states Trengove.

In light of the growing interest among consumers in EVs and the ability of vehicle OEMs to meet their expectations, these volumes will surely increase in the coming years.

In November, Volvo announced it had made conventional batteries “a thing of the past” with the development of a “revolutionary concept for lightweight structural energy storage components”. In partnership with Imperial College London (ICL) and eight other major partners in an EU-funded project, the OEM has developed carbon fibre car panels which incorporate nano-structured batteries and super capacitors, energised by brake use or plugging in to mains electricity.

“The prototype S80 plenum cover and trunk lid are both handmade, and use pre-preg carbon fibre fabric,” says Malin Persson, safety and environmental communication manager at Volvo. The fabric, including connected electric storage cells, is formed in a component mould under heat and pressure; then the parts are cured and polished for assembly in the vehicle. Persson likens the process to that for car seat cushions or bumper covers, where metal parts with electrical wiring are inserted into plastic components. This is good news for production because, as Persson points out, “similar tools already exist”.

However, like most innovations, the technology is likely to require “many changes in vehicle production”. Persson suggests it might be better to establish a small, dedicated manufacturing set-up for the production of such unique components, whether inside or outside the existing facility.

Volvo is not discussing cost estimations at present. “We know that carbon fibres are more expensive by weight compared to steel, but much cheaper than a regular lithium-ion battery by weight,” says Persson. The biggest benefits appear to be the weight savings (up to 15%) and space savings from integrating components, eliminating steel in the body and avoiding the need for a cooling system because the low resistance produces less heat.

“All these attributes together give possibilities for a better environment and economy as a whole, despite possible consequences in manufacturing,” explains Persson. In addition to cost, estimations of production time have “not yet been discussed in detail”.

The EU project took more than three years, but there is plenty of work left to do. “Development is still needed and a cautious introduction of limited structural battery components might be seen within 10 years,” says Persson. This would include electric delivery to regular 12V systems and soft hybrid start/stop systems. “Later on, hybrids might appear and beyond ten years we might find pure EVs with these structural battery panels.”

There are upcoming projects financed by both the EU and interested parties.