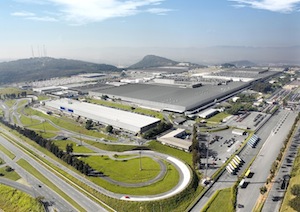 Flares, fires and petrol bombs flashed through the news this summer as Brazil battled riots sparked by its hosting of the FIFA World Cup – and as I prepared to embark on a tour of automotive production facilities in the region. Interestingly enough, the popular protests and my personal plans reflected contrasting sides of the same real: the Brazilian economy. While the demonstrators were expressing their view that the World Cup was an unaffordable extravagance by a government spending too little on infrastructure and public services, I was heading there to investigate why vehicle-makers are increasingly perceiving Brazil, and to a lesser extent South America, as a lucrative market.

In terms of sales volumes, the country ranks fourth worldwide, with 3.7m vehicles sold last year. Moreover, there is immense potential for growth; whilst the saturated markets of the US and Europe boast a car for every one or two people, for Brazil’s 200m inhabitants the ratio is just 1:4. As explained to me by Alfredo Leggero, manufacturing director of Fiat Chrysler Latin America, when I visited Betim Plant, the socio-economic context is immensely promising: at 5.5%, unemployment is at a record low, while the working-age population, the middle-class and the consumer market are all growing.

No wonder OEMs are rushing to take a big bite of the Brazilian market by localising their production. The original four of Ford, GM, VW and Fiat – established in Brazil nearly a century ago in the case of the two American brands – have been joined by OEMs from around the world, most recently the Chinese. According to Fiat’s data, the 98% market share enjoyed by the big four in the 1990s has dropped to 67% and there are now 16 carmakers with local production. However, the veterans have not stood idly by while their slice of the pie has been nibbled by newcomers. All four have upgraded their production facilities or pledged to do so, with GM announcing a $2.9 billion investment only this August.

Brazil is a pie which is not merely begging to be eaten but actively insisting on it. The market was opened up for imports in 1992, but the government has since implemented a controversial programme to stimulate the domestic automotive industry, including heavy taxes on imported cars and parts. While the jury is still out on the impact of Inovar-Auto, a second phase is being debated for 2017 onwards. The picture is clouded, though, by the general election which will imminently decide who takes control of the world’s seventh-largest economy – albeit one which has stalled this year after more than a decade of growth.

For automotive OEMs, 2013 was the peak of production – for example, both the Fiat and GM plants I visited hit new records. By contrast, H1 2014 has seen a national output of 1.35m units, and a drop in sales of 12%. But Brazil is far from the only country facing an economic challenge right now, and its long-term prospects remain positive. This year may have been a disappointment for vehicle-makers and the national football team alike, but with suitable leadership, organisation and support, I’d tip both for future victory.