Editor's note: The politics of production 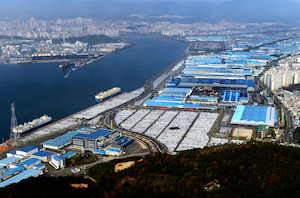 I hate to give more attention to an egotist, but when the leader of the most powerful nation on earth threatens to start trade wars with other global big-hitters you have to at least allow for the possibility that he might do what he says. Among others, the key countries covered in our Asia-Pacific 2017 supplement, China, Japan and South Korea, have all come under attack from President Donald Trump as he seeks to boost US industry, though his proposed trade barriers are as yet no more concrete than his infamous wall.

As noted in our regional overview, Japan and Korea both depend upon exports for the health of their automotive industry. The former ships out half its domestic production, with one-third of these exports going to the US despite many OEMs having established production bases there, as has Toyota, the top vehicle-maker in the Asia-Pacific – and often, the world. Meanwhile, Korea exports the vast majority of its production, most of which comes from the five factories operated by Hyundai at Ulsan, the largest automotive manufacturing complex on the planet. But even without external influences, that production is not what it might be; strikes by workers in search of even better wages have become an annual custom, and particularly bad stoppages last year cost Hyundai more than 100,000 units of production, or half the output of a decent-sized factory.

While Japan and Korea are expensive places to make cars, in part due to the high labour costs, other areas of the Asia-Pacific remain relatively cheap, as confirmed by Bill Russo, manufacturing vice-president for Ford in China, who says that at many of the OEM’s locations in the region energy costs are a greater burden than wages.

At the same time, and in contrast to the US as it heads down a protectionist route with Trump at the wheel, China seems to be getting more progressive. For example, there are plans to relax the rules on joint ventures, allowing foreign OEMs to take greater ownership than in the years when China shielded its nascent domestic industry from more advanced invaders. This is part of a wider strategy to create a globally competitive automotive industry focused on ‘new energy’ vehicles, with a target to make 20% of sales from electric, hybrid and fuel-cell models by 2025.

China is showing its greater confidence in other ways, too. Chinese OEMs such as Geely and SAIC are moving into South-East Asia; setting up new factories, expanding existing operations or buying a stake in native companies. For example, mirroring its recent acquisitions in Europe, Geely now owns nearly half of Malaysia’s Proton Cars. Meanwhile in July, SAIC’s Wuling joint venture with GM opened a new factory at Cikarang, Indonesia, in a country where GM itself and compatriot Ford were both obliged to close plants after poor sales, having failed to crack the dominance of the Japanese brands.

The Japanse OEMs have routinely taken almost all of the Indonesian market – last year, 98% – and are also strong elsewhere in South-East Asia. But the politics of production are shifting and the local manufacture of cheap Chinese vehicles may give the latest powerhouse in the Asia-Pacific a slice of growing sales in a populous yet underdeveloped part of the world. One thing’s for sure: Trump wouldn’t allow it.