In general, Europe’s light commercial vehicle (LCV) market is supplied by native manufacturers, with only two non-European brands, Nissan and Hyundai, having a production footprint of their own on the continent (Toyota sources the ProAce van from a PSA plant). However, Nissan’s NV200 van has not been a major success and is expected to be replaced by a Renault-based version in the near future. The Hyundai H350, made in Turkey under contract by Karsan, is also a marginal player by comparison with the other models on the market.

In total, around 2.5m LCVs are made in Europe each year by the major vehicle companies. These come in a variety of shapes and sizes (see table), but can be categorised by gross vehicle weight (GVW) as follows: microvans, 1.7 tonnes; compact vans, 2.0 tonnes; medium vans, up to 2.8 tonnes; large vans, 3.5 tonnes or higher (van s rated over 3.5 tonnes are technically medium commercial vehicles, in the 3.5-7.5 tonnes GVW category, and are subject to different driving licence regulations).

The Mercedes Sprinter, Volkswagen Crafter and Iveco Daily are the main vehicles in the 3.5-tonne segment, which can also be configured for heavier-duty work. Renault produces the Mascott in the segment above 3.5 tonnes, which is not classified as a light commercial vehicle as a result. The latest LCV developments are detailed below.

Fiat: Going it aloneThe OEM’s LCV range was once closely aligned with that of PSA, but this partnership has been gradually unwound in recent years. The alliance in microvans, through which Fiat’s partner, Tofas, made these vehicles in Turkey, has come to an end, leaving Fiat to fund the future development of the next Fiorino alone.

Above the Fiorino, and also made in Turkey, is the Doblo, which comes in commercial and passenger formats; the Doblo is also produced as the Opel/Vauxhall Combo. This contract runs until 2019, when the Combo will be replaced by a model based on the PSA Berlingo/Partner; this plan was put in place ahead of the recent acquisition of Opel/Vauxhall by PSA. The Bursa plant, which also produces the Fiat Tipo/Egea compact car, was reported in early 2017 to be the most productive in Fiat Chrysler worldwide, turning out more than 380,000 cars and vans, 280,000 of which were exported.

Fiat used to source a version of the PSA Jumpy/Expert, sold as the Scudo, but this arrangement ended in 2011 and was eventually replaced in 2014 by the Talento, a version of the Renault Vivaro made in France. Fiat’s largest van, the Ducato, is made in Atessa, Italy, in a 50:50 joint venture plant, Sevel Sud, with PSA. According to recent Italian press reports, Fiat had a call option to buy out PSA from this venture; this needed to be exercised by the end of September 2017, but it was not, and therefore the joint venture will likely continue well into the 2020s, producing both Fiat and PSA vans.

In 2014, €700m ($831.5m) were committed to this plant, with €550m coming from Fiat and €150m from PSA, and it is preparing to accommodate a new model in 2019-2020. As the plant is apparently secure, with a full production load for Fiat, Peugeot and Citroën, and potentially Opel/Vauxhall models in the long run, Italian unions are calling for renewed capital investment in the factory, to modernise its equipment and secure the 20,000-plus jobs both there and at its suppliers.

The plant made 290,000 vehicles in 2015, falling to around 261,000 in 2016. Such volumes have been achieved on the back of regular weekend working and, in protest, the factory unions voted against this in October 2017, calling for investment in the production line and additional recruitment instead.

Ford: Transit to TurkeyFord concentrated the manufacture of its iconic Transit van at Kocaeli in Turkey after closing its Southampton, UK, plant in 2012, some years after the end of production in Belgium. With an investment of $52m, Kocaeli’s annual production capacity is due to be raised from 290,000 to 330,000 units by September 2018 to meet global demand; Transits are supplied worldwide from Kocaeli, excluding the US, where Ford makes the vehicles in Kansas City, Missouri.

Close by the Kocaeli plant is a second factory, Yenikoy, which makes 75,000 small Transit Couriers per year, although this too could be raised to around 125,000, subject to demand. The plant opened in May 2014 following an investment of $511m. Ford’s Turkish operations also produce the Cargo heavy truck, the only such facility in Ford worldwide, at a rate of around 5,000 a year.

The OEM’s second European LCV operation is at Valencia, Spain, where the Transit Connect is assembled alongside the Kuga SUV crossover.

Mercedes: Investing in Spain and GermanyThe OEM makes its vans in France, Spain and Germany. French production involves Renault making a version of its Kangoo for sale as the Mercedes-Benz Citan. This is a relatively small operation, currently running at around 30,000 units a year. By contrast, production of the Vito (and its passenger version, the Viano) in Spain and the Sprinter at two plants in Germany, results in 150,000 units per factory each year. Both of these programmes have seen significant investment in new models and modernised facilities in recent years.

Two Mercedes LCVs are made in Spain: the X-Class pickup at Nissan Barcelona, which is expected to reach 20,000 a year at its peak, and the Vito medium van, manufactured by Mercedes Vitoria. Mercedes has recently committed a modest €34m investment to make electric versions of the Vito, although it has not yet said when the electric model will be launched.

Rising production in Spain has led to an increase in employment to cope, with 1,350 new permanent jobs created in 2017 and 150 more scheduled for 2018. These new recruits will enable an additional permanent shift to be introduced and for weekend overtime to become a thing of the past; such extra time in Q4 2017 aided production of 148,000 vehicles by the end of the year. Production is expected to climb further in 2018 to 155,000-160,000, more than 50% higher than the Vitoria plant made a decade previously.

Production in Spain is increasing despite the end of CKD (completely knocked down) supply of the Vito to the US, where it is sold as the Metris. To avoid a 25% duty on imported vans, Mercedes has added a second Vito assembly line at the Ladson plant in South Carolina, which is currently being expanded at a cost of $500m in order to make the Sprinter large van. Until now, Sprinters have been assembled from knocked-down kits, but the new model will be classified as a US-made vehicle, with locally made seats, headliners, cockpits and front-end modules.

In Germany, Mercedes is investing €450m for Sprinter production at its Dusseldorf and Ludwigsfelde plants. The former makes the full body van and minibus versions, while the latter produces chassis cab variants with customer-specified fittings on the rear. A new model is due in 2018-2019, and will include a full electric version for which delivery company Hermes will be the first customer, having placed an initial order for 1,500 vans.

PSA: Growing French productionThe OEM makes compact vans in Spain and Portugal and medium vans in France, while sourcing its large vans (the Jumper and Boxer) from its joint venture with Fiat in Italy. The plant at Vigo in northern Spain is the main Berlingo/Partner factory, but excess production of both models, mainly for exports beyond Europe, is also carried out in Mangualde, Portugal.

The Hordain plant, in northern France, makes the Jumpy and Expert (as well as the Spacetourer and Traveller passenger versions) and the Toyota Proace; 2017 was a strong production year, with demand expected to continue, a night shift added in April and an additional 500 workers taken on. Output was expected to reach approximately 138,000 units by the end of 2017, and up to 180,000 in 2018. As part of a never-ending search for cost savings led by PSA’s CEO, Carlos Tavares, €40m are being invested to modernise the production line and reduce its footprint by the end of 2018.

In addition, PSA now has the Vauxhall plant in Luton, UK, which makes the Vivaro at a rate of around 75,000 a year. The Vivaro is essentially a Renault vehicle and the current contract to make it runs to 2024. Since it is unlikely that the Hordain plant could turn out enough additional vehicles for sale as a Vivaro replacement, at least not without significant investment, production at Luton appears secure for now, but it could switch to France at the next model change if PSA decides to expand manufacture there.

Renault-Nissan: High efficiency at small plantsRenault has three van plants in France: Maubeuge, where it makes the Kangoo; Sandouville for the Trafic; and Batilly, home of the Master. At all three plants, production for other brands takes place, notably for Mercedes, Fiat, Opel/Vauxhall and Nissan. In return, the Nissan plant in Barcelona makes the Navarra pickup in versions badged as the Mercedes X-Class and the Renault Alaskan. Similar arrangements operate at Nissan’s Aguascalientes complex in Mexico and Renault’s Santa Isabel plant at Córdoba in Argentina.

Maubeuge has recently won a place in the top ten most efficient plants in the Renault-Nissan Alliance worldwide, rivalling much larger Nissan factories in China, Mexico and the UK, each of which makes over 500,000 vehicles a year. Maubeuge, by comparison, made 162,000 in 2016, including about 30,000 Mercedes Citans. Its place in the top ten makes it the most efficient Renault plant in France; this is backed up by a long-term plan to invest a further €500m in the factory for the next-generation Kangoo, which could be made at a rate closer to 200,000 a year when factoring in future Nissan and Mercedes volumes. Maubeuge was also one of the first van plants in Europe to make electric versions, and reached the 30,000 mark for electric Kangoos in October 2017.

Renault’s Sandouville plant, in north-west France, has also put in a strong performance in recent times. In October 2016, it moved to 24-hour production for the first since 2003 by adding a night shift, and a further 240 jobs were added in 2017 as production rates rose. Output climbed over 121,000 in 2016, a 30% rise on the year before, and with around 680 vans coming off the production line each day in 2017, Sandouville currently has a running rate of close to 150,000 vans a year.

VW: Hanover is heart of productionThe vehicle maker produces LCVs in three locations: Hanover in Germany, and Poznan and Wrzesnia in Poland. Wrzesnia is the most recent plant, having opened last year to make the new Crafter large van; until early 2016, VW had sourced the Crafter from Mercedes, which was made in Düsseldorf and Ludwigsfelde alongside the Sprinter, with only minor cosmetic differences.

The new Crafter was developed by VW itself, drawing on expertise from the Group’s MAN truck division. A heavy-duty version for MAN is also expected, helping to fill the gap in the OEM’s range between the Crafter and MAN’s current smallest truck.

However, the heart of van production at VW is the Hanover plant, where the bulk of Transporters and the Amarok pickup truck are made. Approximately 200,000 Transporters were made in 2016 (around 173,000 in Hanover and 26,500 in Poznan), which was an increase of more than 11% on 2015’s total and the highest volume for the model in over 40 years. Similarly, 2016 production of the Caddy, around 158,000 units, was also a record. Current Crafter volumes are 50,000-60,000 a year, but VW has ambitions to reach 100,000 per annum and present a major challenge to competitors, especially Ford and Mercedes.

The €800m Wrzesnia plant opened officially in October 2016, just 23 months after ground-breaking. The all-new factory has been designed to produce a bewildering variety of vans, differing by length, height, specification and customer needs; VW claims to have offered no fewer than 69 derivatives from day one. 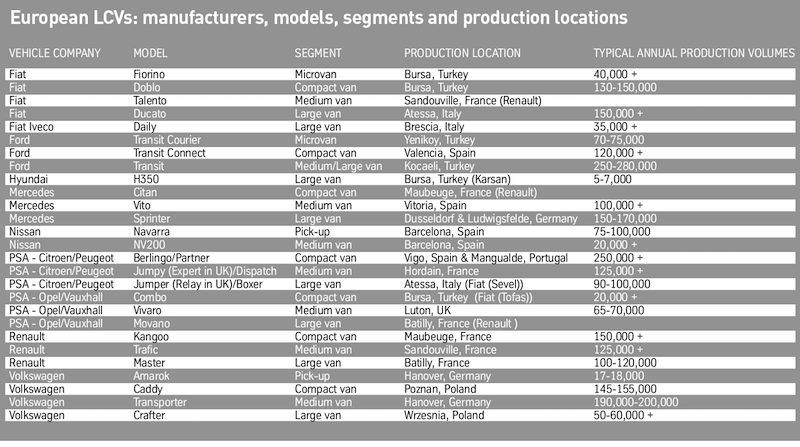