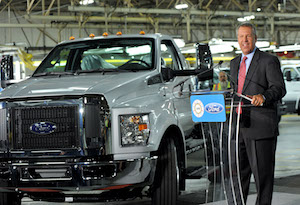 There will be a new Ford soon – a new company that is, not just a new model. At least, that is the ambitious plan outlined to Ford's investors in September. This new company will not only allocate capital more efficiently, deliver improved margins and strengthen its core business as well as several other matters that companies tend to talk about when launching a fresh strategy. According to Ford president and CEO Mark Fields, it will become a bigger and different business. Investors were told that Ford intends to become a leader in electrification, autonomy and mobility, as well as to transform its hitherto under-performing operations.

The company may well remodel itself along these lines, but read any carmaker's strategy announcement in recent times and it will almost certainly contain plans to focus on electrification, autonomy and mobility. They all want to do it. They can’t all be leaders.

Ford certainly has strong, and indeed leadership, positions in full-size pick-ups in the US and has global volume leaders in the segments occupied by the Explorer and Expedition (due to US sales rather than global reach). Yet, it remains to be seen how the company is going to suddenly transform Lincoln into what it calls “a differentiated, world-class luxury brand”. Displacing Lexus from the number-one spot on the American Customer Satisfaction index, which Lincoln reportedly has done, is impressive but it will take a lot more than that to overtake the volumes and brand appeal of BMW, Mercedes-Benz and indeed Jaguar and Land Rover – two brands that Ford used to own.

The new Ford also wants leadership positions in selected emerging markets, citing Russia and South America as two which are about to embark on the path to recovery. The OEM is re-examining what it can do in India and claims to be on a profitable path in the Middle East and Africa. Interestingly, the European market – where Ford has lost significant sums in recent years – receives barely a mention in its strategic intentions.

Changing the company’s focus and expanding in the mobility and vehicle-sharing markets will come at a cost; chief financial officer Bob Shanks told investors that he expects profits to fall in 2017, just as they are expected to do in 2016. By 2018, the company anticipates that cost efficiencies and savings of $3 billion a year will have offset the increased investment planned for autonomous and electric vehicles and the refocusing of the company along the lines mentioned above.

One of the significant efficiency or cost-saving actions is Ford's decision to move small-car production out of the US and into Mexico. This has incurred the ire of Republican presidential candidate Donald Trump but, like other vehicle-makers, Ford has found that it cannot make small cars profitability in the US. The concentration of US production on its remaining large cars, SUVs and pick-up trucks lines is how most of its global profits materialise.

Arguably, Trump has unfairly singled out Ford for criticism on this matter; the company is not alone in seeking low-cost production locations across the Mexican border, just as it is not alone in looking at electric and autonomous vehicles as the next route to financial salvation and market leadership. Whether such salvation and leadership will be Ford’s prizes remains to be seen.