The OEM's established brands, vehicle line-up and production locations will be repositioned worldwide 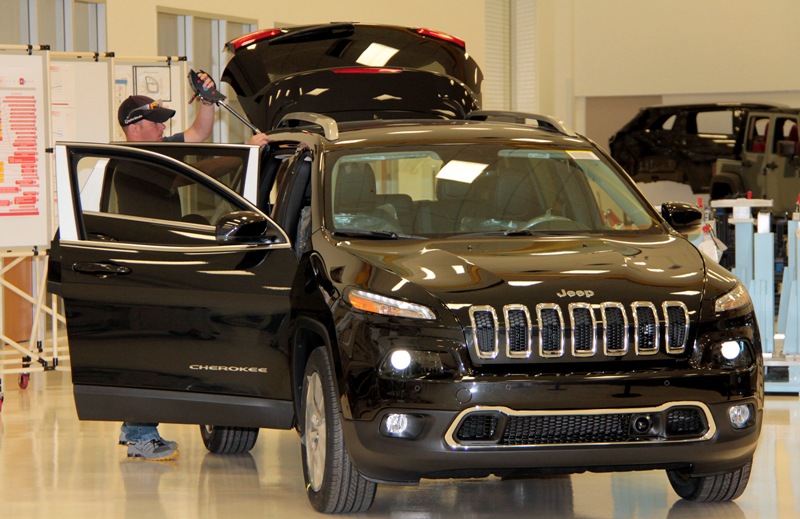 Creating a single entity out of transatlantic mergers or alliances has proven difficult for Ford and General Motors, despite the One Ford strategy now being seen by some as paying dividends. Likewise, the break-up of DaimlerChrysler some years ago shows how problematic merging European and American companies can be.

One of the most notable things about the new Fiat Chrysler operation is that Fiat factories will be producing models for Jeep and Ram. For example, the Jeep Renegade will be made in Fiat’s Melfi plant in Italy and at its huge and expanding Pernambuco operation in Brazil, while the Italian-made Ducato large van and the Turkish-made small Doblo van are already being shipped to North America for sale through the Ram network as the Promaster and Promaster City respectively. Local production of the Promaster in Mexico will eventually replace imports from Italy.

While new production facilities – and sales operations – outside North America will be developed in the next few years to facilitate the transformation of Jeep into a truly global operation, North America will remain the centre of the Chrysler-Jeep-Ram operation as the company made clear at its strategy presentations back in May. Specifically, the OEM highlighted its 12 vehicle assembly plants, eight stamping plants and 16 powertrain and component plants in North America and how its manufacturing activities in the region had actually grown in recent years, with its manufacturing workforce increasing from 33,000 in 2009 to nearly 52,000 in 2013.

The company has invested over $4 billion in its North American assembly plants in the last five years, with nearly $4 billion invested in its powertrain operations in the region in the same period. Across all its brands, for 2009-2013, Fiat Chrysler claims to have the largest total volume growth (968,000, ahead of Ford in second place with 928,000) and the largest market share growth at the same time (+2.3%), making it the only company to achieve over 1% share growth in this time period).

Chrysler – heartbeat of the company
The Chrysler brand is slated to become the company’s mainstream car and minivan brand in North America, doubling the size of its product range by 2018 and also cutting two Dodge models in the process. According to brand chief Al Gardner, the Chrysler name will be revamped to take on the other mass-market brands, ie Ford, Chevrolet, Toyota, Honda and Hyundai.

The Chrysler nameplate has just three models at present, but will add a compact sedan in 2016, a full-size crossover in 2017 and a mid-size crossover a year later. The Town & Country minivan will see a redesign in 2016 (a year later than originally planned) and at this point the Dodge version, the Grand Caravan, will be dropped. While the Chrysler 200 will remain as a mid-sized sedan (the future compact sedan in 2016 will be the Chrysler 100), the 200’s sister model, the Dodge Avenger, will also be dropped within the next year. The 200 will receive a refresh in 2017 while the largest sedan, the 300, will have a make-over a year later.

Expanding the Chrysler range (while shrinking the Dodge line-up) is expected to see worldwide sales of Chrysler models more than double from 350,000 in 2013 to 800,000 by 2018. Many of these Chrysler customers will be expected to come from Dodge and, if this target is achieved, the Chrysler will have returned to the kind of volumes it last sold in 2005. Currently, the market segments which the Chrysler brand serves amount to around 3.5m units annually, versus a target market worth 11m units per year when the expanded range for 2018 is taken into account.

The current lack of crossovers in the Chrysler range is a major gap and the brand is missing out on the substantial market served by vehicles like the Ford Explorer, Toyota Highlander, Nissan Pathfinder and Chevrolet Traverse in the full-size segment and the Chevrolet Equinox, Nissan Rogue, Ford Edge and Kia Sorrento in the mid-size segment. Together, the Chrysler models will be expected to sell at least 125,000-160,000 units a year.

Jeep – iconic brand to become global
While Chrysler will remain essentially an American operation and brand, at Jeep the aim is somewhat different. The company wants to revitalise “an icon on a global basis”. More specifically, Mike Manley, Jeep’s CEO, wants “to return Jeep to the number one SUV brand in the world". Sales this year are expected to exceed 800,000 units, and the new small Renegade model will help to push Jeep sales towards and hopefully over the 1m level in the not-too-distant-future. This would be a remarkable turnaround for a brand which sold only 337,000 units as recently as 2009; since then the brand has achieved a remarkable annual growth rate of 24%. In fact, the company’s plans for Jeep are much more ambitious than this, with the ultimate aim of reaching close to 2m units a year.

The new Jeep range will be bigger and wider, and more highly specified than before. The current five-model line up (Wrangler, Patriot, Compass, Cherokee and Grand Cherokee) will become a six-model line-up, with the Renegade added as an entry model later this year, the Patriot and Compass replaced by a single model in 2016 (the brand’s 75th anniversary) and an all-new, seven-seater Grand Wagoneer (positioned above the Grand Cherokee) in 2018. The Cherokee has just been renewed, while the Grand Cherokee itself will be renewed in mid-2017; the iconic Wrangler will be renewed earlier in the same year.

This range expansion will be accompanied by higher production volumes than in the recent past and also a significant widening of the brand’s production geography. Historically, Jeeps have almost entirely been made in North America, specifically at the Belvidere, Toledo North & South and Jefferson North factories in the US. Production capacity there is around 800,000 units a year, with around 550,000 units sold in North America and the balance spread across Europe, South America and Asia-Pacific.

Although a small number of Jeeps were made in Austria in the 1990s, and have been made in associate company plants in Venezuela, for example, these were essentially kit assembly operations. The new plan calls for full manufacturing of Jeeps outside North America for the first time in the brand’s history.

The aim is to make around 1m units in North America, 200,000 in South America, 200,000 in Europe and as many as 500,000 SUVs in China and India. Fiat Chrysler has seen the growth in SUV sales outside North America and recognised that it has to be present in these fast-growing markets to avoid missing out on profitable growth opportunities. According to Jeep, while its sales will climb towards the 1.9m mark by 2018, growth will be mainly outside North America, where annual growth will be less than 10%; by contrast, Jeep is expecting growth in Latin America of more than 50%, while Asia-Pacific should see growth of around 45% and Europe about 35%. 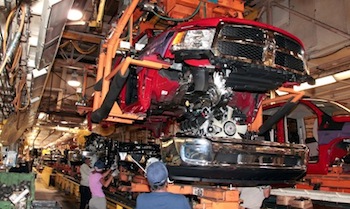 Thus, while North America will remain the centre of the Jeep brand in terms of development and production, the brand will become much less reliant on its home market and is intended to become a truly global brand. Between 2013 and 2018, Jeep is expecting 17% of its growth to come from natural industry growth, 6% from share growth from existing models, 13% from new segments which the Jeep brand will serve, but no less than 64% from localisation of production leading to significant sales increases in new markets.

In essence, Jeep is looking to move from five models built in one country to six models with production operations in six countries. In China, a collaboration with Guangzhou Automobile Co will make the Cherokee and Renegade initially, with the single replacement for the Patriot/Compass also expected to be made there in due course. In Brazil, production of the Renegade will begin soon, with the Compass/Patriot replacement also expected to be added to the line-up at Pernambuco.

Ram – American roots, Italian flavouring
Although Ram will – as noted above – receive a couple of European-made models to fill out its North American offering, it will remain first and foremost a North American operation and brand. The company is projecting a rising market share in the US this year, reaching 22% or more, while its main competitors, Ford and GM, have seen their shares decline into the mid-30% range. Moreover, Chrysler claims that Ram is the fastest-growing pick-up brand in North America with the youngest average age and highest average wage amongst pick-up truck buyers.

Interestingly, however, despite its rising sales and improving customer profile, in the new product plan there will be no major upgrades for the Ram Pickup, said to be one of the group’s most profitable lines, until 2017; like the Chrysler Town & Country minivan, this revamp will be a year later than originally planned. It is also worth noting that the Ram Promaster (a rebadged version of the Fiat Ducato) will ultimately be made in the new Saltillo plant in Mexico which has been the subject of a $600m investment.

Improving powertrain operations
Given the company’s traditional focus on large cars, SUVs, minivans and pick-up trucks and their less than optimal aerodynamics and fuel efficiency ratings, improving powertrain performance is clearly of great importance. The crossover models referred to above will include plug-in hybrids, but this is not the only area of powertrain development which the new company strategy encompasses.

Fiat Chrysler will rapidly switch its north American line-up away from its ageing four-, five- and six-speed transmissions to new eight- and nine-speed units, which are said to generate fuel efficiency gains of 6-10%. This switch will apply in North America, while other regions will retain their own traditional transmissions, albeit with subtle changes. For example, the company is expecting manuals to remain the dominant transmission type in Latin America, at over 70%; at the same time, automatics will quadruple from 7% to 27% between 2013-18. 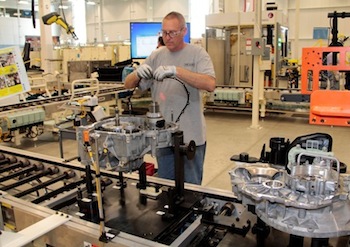 With regard to engines, in North America the company has replaced no fewer than seven V6 engine programmes with one Pentastar series. This process of rationalisation and range simplification will be extended to a new small engine family which will feature a number of fuel-saving technologies, including: twin-scroll turbochargers, an integrated exhaust manifold, stop-start systems and low-friction, roller-bearing camshafts and balance shafts.

Looking at the overall strategy, Fiat Chrysler’s plans for its American brands are every bit as ambitious as those for its European operations. Transforming Jeep into a global brand, with global production operations, seems logical enough and the inherent strength of the brand should enable this side of the plan to come to fruition. Whether progressively reducing the scope of the Dodge brand and switching attention and resources to Chrysler will work – or is even worth it in the inherently conservative North American market – remains to be seen.

Moreover, whether selling 200,000 Fiats and Alfas in North America is a realistic proposition will be questionable at least until the new range of Alfas finally appears and a dealer network is actually established. However, the company deserves credit for its ambition if nothing else.