As the world’s largest CV market cools down, OEMs are finding themselves burdened with excess capacity

Commercial vehicle (CV) makers in China are feeling the pressure as the world’s largest CV market contracts, exposing serious overcapacity issues. It is a sharp comedown for the country’s multitudinous local makers of heavy and medium trucks who have benefited from a long period of growth. Now analysts are saying the slowdown could usher in a period of consolidation, reducing the huge number of brands on sale.

The Chinese truck market far outpaces that of the second-biggest global market, the US. The combined heavy and medium truck market is around 1.2m per year, compared with 380,000 for the US, 260,000 for India and 162,000 for Brazil. As with many of China’s industries, growth has been spectacular in recent years, doubling from 2006 when 611,000 units were sold. However, growth in the truck industry has declined in recent years in parallel with a slowdown in the wider economy, and this year has seen the biggest falls yet.

The downturn is hitting the heaviest trucks the hardest, with analysts IHS Automotive predicting that sales in the country will drop by almost 100,000 vehicles to around 660,000 over 2015. Medium trucks (over six tonnes gross vehicle weight) are expected to avoid the slump, says IHS, but they represent a smaller chunk of the market at a predicted quarter of a million in 2015.

In the year to the end of April, the heavy truck market was already in the doldrums, falling by 33% to help drag China’s huge CV market down by 15%, according to the China Association of Automobile Makers (CAAM). One of the biggest truck-makers, Beiqi Foton, announced that sales of its heavy and medium trucks were down 41% in Q1.

Why so down?
One reason for this decline is the state of the wider economy. “The economic growth in China slowed to its weakest since the 2008-2009 global financial crisis in the first quarter of 2015,” says Jia Lia, IHS’s medium and heavy truck analyst for China. Beiqi Foton said in its Q1 report that demand was down for coal and construction transport, hitting the Auman range of heavy trucks it produces with joint venture partner Daimler.

Another big reason is the long-delayed move to China IV emissions standards at the beginning of the year. Just as Europe’s switch to Euro 6 standards for trucks at the beginning of 2014 prompted a dash for sales of the cheaper, higher-emission vehicles in the run-up, so it has in China. “There was an advance-purchase effect before the new emission norm became effective,” Li confirms. Truck manufacturer Dongfeng recently told the Daily News website that costs had gone up because of the need to fit urea-based emissions control systems in its engines, and that this had put off buyers.

The downturn has already seen manufacturers holding back on investments. In March this year, German engine specialist Deutz said it had decided to “wind up” a joint venture planned with its majority shareholder AB Volvo to build engines under the name Deutz Engine (China). The company also put on hold another proposed JV, blaming “challenging market conditions” and said it was holding “strategic talks” with China’s largest heavy truck engine maker, Weichai, with which it has a JV called Weifang. Deutz will carry on building truck engines in yet another JV with automotive giant First Auto Works (FAW), which makes trucks under the Jiefang brand and vies with Mercedes-Benz for the title of the world’s second-largest truck nameplate by sales.

It might look bad for foreign players in the Chinese truck market, but the reality is that the move to China IV emissions standards gives them some much-needed assistance in difficult times. “So far we hadn’t seen that the joint ventures had benefited much from their foreign partners in handling the current market downturn,” says Li. That situation changes, she says, when the local partner starts to lean more on the foreign OEM for the upgrade of fairly simple vehicles. Suddenly, the bigger R&D budgets and manufacturing expenses that had been hobbling foreign makers on price can now be better incorporated into the higher purchase prices.

Unlike India, which is almost impenetrable to outsiders due to the dominance of the giant family-run industrial groups such as Tata and Ashok Leyland, China can offer access to a huge number of truck makers that could potentially benefit from the global knowledge of foreign OEMs, much as car manufacturers have (mostly) done extremely well partnering with local makers to sell into China.

Collaborations in China
In 2009, German truck group MAN bought 25% of Sinotruck, part of the wider China National Heavy Duty Truck Group (CNHTC), but the first fully fledged JV came in 2010 when Daimler announced its agreement with Beiqi Foton to build trucks with the JV name of Beijing Foton Daimler Automotive. In the tortuous world of Chinese corporate structures and JVs, the two already had a partnership to build Mercedes cars inked with the name of Foton’s wider parent, the state-owned BAIC, aka the Beijing Automotive Company.

Sold under the pre-existing Auman brand, the first JV truck rolled out in 2012 and work was started on a second plant to create capacity for 160,000 units per year. The initial announcement by Daimler said the JV would also produce the OM 457 engine as used in Mercedes trucks in Europe at a new 30,000 sq.m plant next to the company’s HQ in Beijing. However, this did not happen; Auman trucks use either an engine made locally in partnership with US maker Cummins, or a cheaper one built by Weichai, the company with the Deutz link-up. No reason has been given officially for the switch but one possibility might be that the Daimler engine was too expensive, since the China IV emissions standards arrived over two years later than expected.

Meanwhile, in 2013, Swedish truck-maker Volvo said it would take a 45% stake in Dongfeng Commercial Vehicles, run by the Dongfeng Motor Group, which is partnered with makers such as Peugeot and Nissan for cars. Dongfeng is China’s – and the world’s – biggest-selling brand name in heavy/medium trucks, ahead of Mercedes, according to IHS figures. The deal was large enough to allow Volvo to claim that it would surpass Daimler to become the biggest truck-maker worldwide. Volvo is leveraging the deal in other ways, too. The OEM recently announced that the JV would build a manual gearbox in the country, avoiding imports from Sweden.

Another foreign maker operating in the country is Italy’s Iveco, part of CNH Industrial, which teamed up with Shanghai-based SAIC back in 2006 to build heavy trucks and engines up to 12-litres at its base in Chongqing, south-west China. The JV business was the tenth-largest in terms of heavy truck sales in the four months to the end of April this year, with trucks sold under the Hongyan name. It has also been hit the hardest among the big truck-makers this year; sales are down 73% on the same period last year.

The latest to join the Chinese truck ranks is Hyundai, which signed a JV agreement with Nanjun Auto in 2011 to build heavy trucks in Sichuan province. A new factory is expected to come on stream at some point this year, but so far sales have only reached 121 to the end of April and news of the factory launch has not been forthcoming. 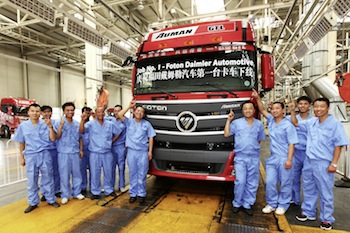 The vast majority of heavy truck-makers (CAAM lists 25 in its sales charge to the end of April) are purely Chinese, but such is the competition that many are linking up with foreign suppliers to gain an edge from both a product and manufacturing perspective.

Anhui Jianghuai Automobile, with trucks sold under the brand name JAC, the sixth-bestselling maker this year, boasts that it uses gearboxes from Germany’s ZF and that its production plant has “the only Kawasaki 6000-ton hydraulic stamping machine in China”. The similar-sounding Anhui Hualing Automobile, the seventh-bestselling brand (using the CAMC badge), claims its H08 series trucks are designed by Italian styling house Bertone and use engines from Cummins, PACCAR and Hino. The Shaanxi Automobile Group, which was fourth in the heavy truck charts this year and sells under the Shacman brand, has a long-standing joint venture with Cummins to make diesel engines as X’ian Cummins.

Overcapacity problems
A big problem for the industry now that the market is slowing down is the under-utilisation of factories. “The China heavy truck industry bears a serious overcapacity problem,” says Li at IHS. “We think most small players will be merged, bought up or go into bankruptcy gradually during the fierce market competition, especially during the product upgrading process.”

One option to relieve the excess capacity for China’s makers is to boost exports, and these companies are in a good position to do so. The relative maturity of the market as well as the wide availability of vehicles using older emissions standards means the country can easily sell to emerging markets; according to CAAM figures, last year China exported 386,886 CVs, including LCVs, worth $8 billion – up 7% on the year before. Half went to other Asian countries, with Vietnam the biggest market in monetary value, with 31,616 sold. Algeria was the next biggest, followed by Iran and Saudi Arabia.

“We think most small players will be merged, bought up or go into bankruptcy gradually during the fierce market competition, especially during the product upgrading process” – Jia Lia, IHS

So far, however, the Chinese makers have been reluctant to invest big money in overseas factories, a situation which is unlikely to change now that they face overcapacity at home. A big no-show has been the Beiqi Foton heavy truck plant announced in 2011 for Pune, India, to be built at a cost of $400m. The greenfield factory was supposed to be running this year, but the Indian media are reporting that several top-flight executives hired from the local truck industry have been let go, leaving question marks over the project.

Currently, South America is the third-biggest export region for China’s CV industry, representing 14%, and Brazil was one market that seemed promising for Chinese makers looking to expand their manufacturing base overseas. In particular, foreign OEMs faced higher import duties as part of the country’s Inovar-Auto scheme to persuade more automotive companies to localise. However, last year Reuters reported that Dongfeng had shelved a plan to build a factory there, while Foton’s plans switched from building a truck plant in Rio de Janeiro State by 2014 in favour of opening one in the southern state of Rio Grande do Sul by 2016.

Africa is currently a bigger market for China, taking 30% of all its CV exports in 2014. In the same year, the China National Heavy Duty Truck Group signed a deal to construct a Nigerian factory capable of building 5,000 trucks a year from kits. 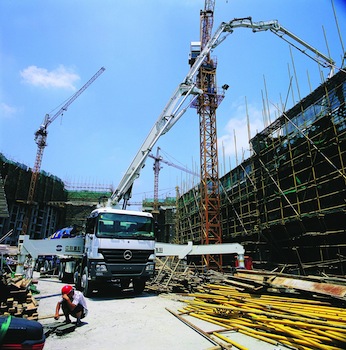 Investments at home
In terms of investing in factories at home, Li at IHS does not expect any manufacturers to add capacity to existing plants in the downturn, but says there is a possibility that some might expand into new regions to gain a bigger foothold elsewhere. Unlike with the car industry, which is mostly spread along the east coast near Shanghai, or Beijing to the north (bar a handful of inland centres), China’s truck industry is still situated where the Communist central planners thought they would best provide employment, giving them a wide spread.

For example, FAW is located at the north-eastern corner of country in Jilin Province; Shacman trucks are made in the central Shaanxi Province; JAC and CAMC trucks are built in Anhui Province, west of Shanghai; Tri-ring trucks (number 11 in the 2015 heavy truck charts) is in central Hubei Province; while SAIC-Iveco is all the way to the west in Chongqing. Dongfeng is also based in Hubei Province, operating two factories, two foundries and an engine plant.

IHS predictions are that the medium and heavy truck market will grow again in 2016 to 1.16m vehicles, but the current downturn will make some smaller manufacturers vulnerable to take-overs – and that would bring some much needed consolidation to a fractured market.