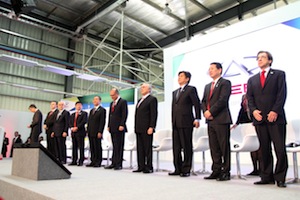 Brazil – The facility in São Paulo State is the first in the country from a Chinese manufacturer and is the OEM’s first full production site overseas. Capacity will reach 50,000 units in Phase One, initially focusing on the Celer and QQ, and will rise to 150,000 in Phase Two.

Representing the vehicle-maker’s largest investment abroad, Chery Brazil Plant covers the four key production processes of stamping, welding, painting and assembly. In addition, Peng Jian, general manager of Chery Brazil, said the factory would be upgraded to an industrial park, “thus forming a whole industry chain system covering R&D centre, vehicle plant and parts supplier, and creating 3,000 jobs”. He added that it would export to other countries “in the future”.

Chery entered the Brazilian market in 2009 and has so far gained 60,000 customers in the country. Describing Brazil as “a core market in Chery’s global strategy”, vice-president Zhou Biren commented: “With the plant's inauguration, Chery will truly take roots in the Brazilian market in the future to develop and design automotive products for the market, thus becoming a local auto brand recognised and accepted by Brazilian consumers.”

Brazilian vice-president, Michel Temer, said: “Chery's construction in Jacareí is driving the development of the local emerging industry, and this will be a new beginning.”