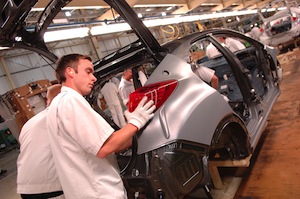 Investment by Japanese vehicle-makers in the US and Europe has been predicated on the assumption that you need to produce where you sell; whether because of the trend toward globalisation or the strictness of government policy – especially tariffs on CBU vehicles to encourage local manufacture – developed-world OEMs have invested heavily in China, Brazil, Russia and India in recent years.

However, several recent manufacturing location decisions suggest that another pattern is emerging. In particular, an increasing number of non-premium models made in Europe are now exported beyond this region, while Japanese exports to the US are back on the agenda again after a period of heavy North American investment by Japanese OEMs.

Nissan will make the Rogue and Qashqai in Japan and ship them to the US, while Honda’s European supply of the next CR-V will come from Canada. Toyota is shipping the Yaris from France to North America; Honda already supplies the Civic from the UK to a number of markets beyond Europe and will also make the UK its global supply point for the next five-door Civic from 2017 or 2018. Meanwhile, FCA is shipping the 500X and its sister vehicle, the Jeep Renegade, to the US. Toyota ships the Avensis from the UK to Japan, an admittedly low-volume contract, but this is the OEM’s only model sold in Japan which is not made there.

By the end of the decade, when its US plant is operational and new 60- and 90-series models have been launched, Volvo will have a global supply network of Sweden, the US and China, with the latter shipping worldwide; S60Ls are already sent to the US from China. The latter is also the sole production site for long-wheelbase versions of various Audi, BMW and Mercedes models, with most of these brands’ SUVs made or soon to be made outside Germany – in the US, Mexico and China.

Final confirmation of Jaguar Land Rover’s Slovakian factory is due by the end of the year in the latest example of this trend, adding to its existing Chinese site and the small Brazilian plant which is under construction. A JLR facility in India is likely before long as well.

But the automotive industry has a history of seemingly odd production decisions and shipment patterns; in the late 1960s, Ford Cortinas from Dagenham and Vauxhall Vivas from Ellesmere Port were sold in North America, while the Volkswagen Beetle has been made only in Mexico since the late 1970s. If someone had said a decade ago that Jeeps made in central Italy would be sold in the US, you might have thought it unlikely; but when Chinese Volvos, Slovakian Land Rovers or Mexican Audis pass you by in a few years time, do not be surprised.