The vice-president – Production discusses operations at the OEM's very modern plant at Chennai, where the bodyshop is almost fully automated and there is an in-house aluminium casting capability 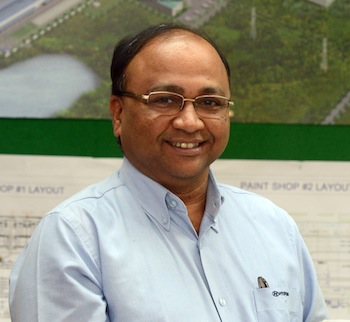 AMS: Could you tell us about the aluminium casting facility at this site?
T Sarangarajan (TS): It is a very clean operation, perhaps not what you might expect from a foundry. We make aluminium cylinder blocks there. We also make cylinder heads in a separate facility. This operation is one of the most sophisticated and efficient in any plant. It is very well managed, with high production efficiency and a very low reject rate.

AMS: What are the automation levels at this plant?
TS: In the bodyshop, welding is 100% automated. Even though, economically, it isn’t the best solution [as labour is cheaper in India], we took this decision due to the complexity of the operations and the need to reduce risk to the workers.
We call this the global line. It is a single line that can produce up to four different platforms.

AMS: You produce 11 models here, but how many platforms do these cover?
TS: Currently in Plant 2, we are producing two platforms covering four different models.

AMS: Which models/platforms are produced in Plant 1?
TS: We produce three platforms in Plant 1, although due to the low volume we bring in the Sonata on a CKD basis.

AMS: If demand for this model increased, would you undertake full production, and would the current facilities be able to accommodate this?
TS: Yes, we would take on full production of Sonata if the demand was there. With some improvements to efficiency, we could raise capacity to 700,000 units.

AMS: How many shifts are you running?
TS:  We are running three shifts.

AMS: Are you producing the latest Hyundai models, and are there plans to produce any new models/platforms here at Chennai?
TS: Yes, we are producing the latest platforms, but there is a policy of introducing a new model/facelift/refurbishment each year. This year, we added the Xcent and Grand i10; both use the same platform but for different segments. This platform was launched for the first time for production in India.

• T Sarangarajan has an automotive career spanning 31 years
• He qualified as a mechanical engineer at Malaviya National Institute of Technology, Jaipur
• He began his career with Maruti, developing the auto ancillaries
• Sarangarajan joined Hyundai in the 1990s.

AMS: Hyundai is the biggest car exporter in India. What factors have helped you to achieve this position?
TS: One reason is location, with the port facility connectivity this offers, and secondly, the availability of skilled man power here. The area has been an automotive hub for over 50 years and Chennai has become known as the Detroit of India. There is good support from the government, and compared to Mumbai or Delhi the general costs are lower.

AMS: Plant 1 was established in 17 months. How long did it take to build and start production in Plant 2?
TS: Plant 2 took just 15 months.

AMS: Similar to how cars are being built on global platforms, are the production facilities here based on a Hyundai global model?
TS: The plant would be very similar to others in the Hyundai network.

AMS: Although it has doubled in size since the completion of Plant 1, are there any plans for further expansion of the facility?
TS: There are no plans to expand at present.

AMS: How much of the powertrain production is exported?
TS: Between 180,000 to 200,000 engines and transmissions are built for export.

AMS: Which parts of the transmissions are manufactured here?
TS: We bring in the casing from outside but the machining operations on the gears and shafts, and assembly, are done here.

AMS: How much of the vehicle content is from Indian suppliers?
TS: Localisation should be between 90-95% on our high-volume models. The Sonata is less.

AMS: How much of your production equipment is sourced from Indian companies?
TS: This is still at a fairly low level, as much of the special purpose equipment [robots etc] is not available from Indian suppliers. So we import this equipment from Korea, Japan and Germany.

AMS: Are procurement decisions taken at a global level?
TS: The policy is that if it is available locally then we buy locally. If this is not the case then we follow the global procurement system.

AMS: How many of your suppliers are located here?
TS: There are about 115 located in Chennai; that’s about 95% of our suppliers. So most are nearby except the tyre suppliers. Normally we work on a single source system, but for tyres we use four or five different suppliers.

AMS: Looking at interiors, do you assemble the dashboards here from supplied components, or bring in pre-assembled units from an external partner?
TS: These are what we call a sequenced part and are supplied to the line ready assembled by our supplier, Mobis.

AMS: Do you assemble the seats here, or are these brought in from an outside supplier?
TS: These are also supplied ready to fit.

AMS: What is the lead time on your parts supply?
TS: For our nearby suppliers it is about two to four hours and beyond those it is about eight hours. 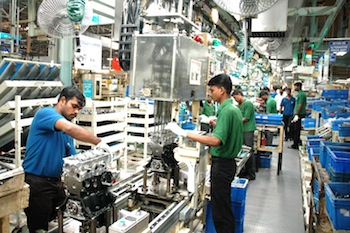 AMS: In terms of the production flow, where is the biggest bottleneck?
TS: The capacity of this facility can go up to 700,000 units per year and each production area is able to fulfil this. However, if we were to increase this capacity, then we would have to look at expanding certain areas, such as the paintshop.

AMS: Do you have parts supply challenges?
TS: Not really. Many of our suppliers are located close by and are able to meet our requirements, and they are all large companies and have the flexibility to meet any increase in demand. Also, they are fully aware of our production plans. For example, they know exactly how many of a certain model, for a particular market, that we will produce over a set period of time. So they plan their production and supply to meet this target.

AMS: When Hyundai originally set up this plant, were there any compromises or changes made to the company’s global production model?
TS: When Hyundai began production here in India in 1997 the brand wasn’t that well known, but they made a full commitment in investing in the latest manufacturing technologies and offering the latest models to the Indian market.

AMS: How do you train the workforce?
TS: We have a facility for technical training. New workers are given training on safety, then on the particular role, and finally they work with a mentor. This will be an experienced member of the workforce who will instruct them on the operation they are to carry out. The training process takes two months, from the start to working on the line.

Also, when you have so many people working here it is important to keep them engaged, to make them feel part of the company. One of the ways we do this is through an ongoing programme of improvement we describe as ‘Progress through innovation to deliver excellence' – 'PRIDE'. All workers are encouraged to look at their operations and propose solutions to improve efficiency, safety or reduce costs. These are presented to the senior management each year and the best is chosen and implemented, and the person who came up with the idea is rewarded. Through this they feel a part of the operations here. Last year, these new ideas helped produce 400m rupees ($m) in direct savings. We have implemented around 4,000 of these initiatives and we have 100% participation from the workforce.

AMS: Are these improvements shared with, and adopted by, other Hyundai facilities worldwide?
TS: There is a lot of information sharing and we also continue to benchmark against other plants.

Hyundai Chennai is in effect two plants on the same site. Plant 1 started production in 1998; the need to increase capacity resulted in a duplication of the production operations in the form of Plant 2. The resultant manufacturing operation covers 535 acres, with Hyundai directly employing over 9,500 workers. 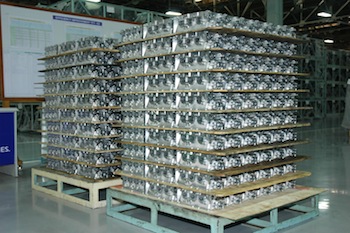 Launched in 2008 with a capacity of 490,000 units per year, this facility in Plant 1 has three aluminium smelters, each with the ability to melt two tons of aluminium ingots (which include silicon for added strength). The molten alloy is transferred to a Reiss Robotics casting unit, along with pre-heated steel cylinder liners, where it is injected into the mould at 850 bar pressure. This 20-second cycle produces the engine block, which is followed by heat treating at 220°C for 3.5 hours, plus quality control checks.

Using a pressurised air system, these checks involve a three-stage process for oil-way and water-jacket integrity and a general test on the crankcase casting. Three- and four-cylinder engines are made according to demand, with changeover between moulds and tooling taking three to four hours.

The bodyshop
With more than 190 robots, Hyundai Chennai has an impressive bodyshop. Over 120 of these six- and seven-axis units are dedicated to spot welding, each with a controller unit sited next to the robot station. With automation levels at about 95%, only a small number of the welding operations are manual, reserved for substructures and difficult-to-reach areas. Each body receives 1,750 spot welds, and the cycle time is 63 seconds. There are 14 robots in the framing station, which features a four-model indexing jig. With power cuts a common occurrence, automation raises the question of maintaining a stable power supply; to tackle this issue, power is supplied to the plant independently from the greater metropolitan area.

In contrast with the high-tech automation, however, a very simple yet highly effective solution has been implemented to solve the problem of car body contamination. At the end of the body-in-white process, the units being transferred to the paintshop pass through a draped cloth which sweeps across their roofs. This removes any dust or particles produced by welding, so avoiding contamination of the cleaning and e-coat tanks.

The assembly hall
In Plant 2, the assembly area is vast; but it can be the smallest things that make the biggest difference to the finished product. Throughout the assembly process, quality control is vital, but when producing high volumes it becomes increasingly challenging. During the AMS tour, Srikrishna, senior executive for Assembly No. 2 Engineering, pointed out some of the solutions to quality issues which have been devised by line operatives: 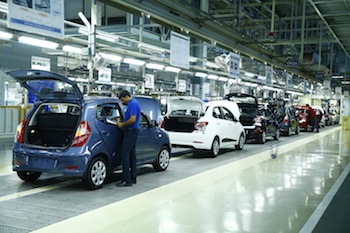 Fitting dashboards – This operation looks deceptively easy, but the cumbersome consoles require careful handling, and a slight change in the design of these units resulted in damage appearing after fastening to the body. The workers identified a need for a simple modification to the tooling which, once implemented, immediately solved the issue.

Checking steering – Creating a small extension that can be fitted to the steering column has allowed operators to check full-lock on the steering without risking damage to the airbag sensor.

Attaching driveshafts – Tipping the whole assembly forward on the RVG from 28° inclination to 42° has prevented fluid leakage.