KTM steps up the pace 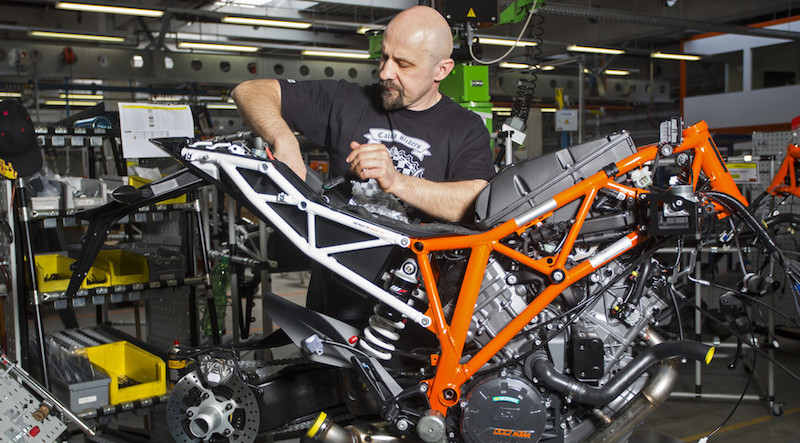 Austrian motorcycle manufacturer KTM has ambitious plans to increase output from its current 160,000 units to 200,000 units per year by 2020. As such, the vehicle-maker is adding new production lines and looking to improve efficiencies in what is a broadly manual assembly operation.

The general assembly hall at the company’s Mattighofen plant currently operates four separate lines, with a fifth to be added in the next few months. The assembly process is very flexible having no dedicated lines, each is able to produce any model in the range, from small two-stroke off-roaders to bigger capacity V-twin sports- and adventure-class machines.

To switch from one model to another requires around one hour to change tooling and parts; the biggest difference is between the on- and off-road models, the former having a higher parts count and work content.

Each line has 16 stations with on average two workers per station. Small sub-assembly sections, feeding in built-up sections such as front forks and steering heads, serve these stations and are crucial to keeping the main assembly flow at an acceptable level. Interestingly all line workers are also expected to be able to build any model. Full training for these workers takes two years to complete and involves them being able to build a complete bike from the first stage to the last, so they understand every assembly operation and process at each station.

Developing core competencesAnother interesting feature of the company is that it is very vertically integrated. A key element of its philosophy is to be highly adaptable and able to design and build new models with high levels of quality and performance, and bring them to market rapidly. So KTM has developed some core competences in-house.

Acquiring the WP suspension and components company has given it the ability to produce its own frames, exhaust header pipes and suspension units providing enormous flexibility in these areas.

It has three frames for its off-road models and nine different frames for the on-road bikes. These provide the basis for 45 different models and when you add in options and regional requirements it boosts the number to around 200 variants being produced. That makes for some complex production scheduling.

KTM also builds its own spoked wheels – with quality paramount for this type of wheel, this reflects the brand’s strong off-road heritage. This section produces 100,000 wheels per year, each one hand-built by a 45-strong team operating on a single shift. Every spoke is fitted to the rim and hub by hand and the wheel is then checked for balance, with final tightening of the spokes performed by a special automated tool. 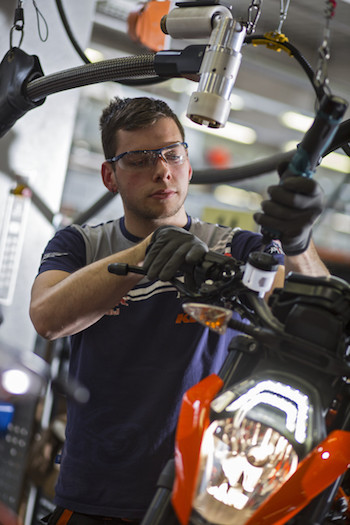 KTM’s Mattighofen plant currently operates four lines, a fifth will be added in the next few months

Engine assemblyHoused in a separate building, KTM’s engine assembly operation features two main lines, served by a number of smaller sub-assembly stations. The production process is complex with ten different engine types covering both two- and four-stroke combustion cycles, and single and twin cylinder configurations. The engine range is designed for both on- and off-road applications and each unit is optimised for weight, power delivery and performance to excel in its segment. This design-led philosophy has resulted in less commonality of parts across the range.

The machining shop is the most automated part of the engine assembly, with 19 Heller CNCs performing machining operations on engine casings, cylinders and heads. These are fed manually into the machine – in the case of the heads, two at a time. A turntable positions the castings, which are fixed to a special jig, into the machining booth where the automated operations are completed. While this is on-going, the operator removes finished parts from the other side of the turntable and refills with the raw castings.

Machining operations include facing the top and bottom of the heads, locations for valve-guides and seats, camshafts and seals, etc.

Hand-finishingQuality control is crucial and the first and last of each batch of machined parts are thoroughly checked. Highlighting just how much of a manual operation engine assembly still is, every machined part is de-burred by hand, with great care taken not to damage the machined surfaces.

Before the engine components reach the main assembly line there are a number of sub-assembly operations to be completed. One of the first is the engine case. This needs a number of seals and bearings to be fitted to both halves of the casing and uses the second most automated process after the machining operations. 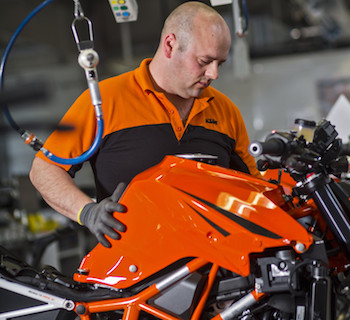 One of the four KTM assembly lines at Mattighofen

To press the bearings and seals carefully into place requires two specialist tools – one for each side, left and right. In a similar process to the machining operations, the cases are loaded onto a turntable inside an automated press; the machine presses the components into place in a single operation that, were it done manually, would take far longer to complete with arguably more risk of faults. As the press fits the parts, the operator loads the next pair of casings in readiness.

Similar (manual) sub-assembly stations build up the cylinder heads and on most units fit the pistons into the cylinders. These parts are brought together at the two main assembly lines. In theory each line can build any of the engines, but in practice Line 1 will usually handle the two-stroke engines with Line 2 building most of the twin-cylinder engines.

Each line can accommodate a maximum of 24 assembly stations – currently Line 1 has 17 and Line 2 has 19. This variation depends on demand and the type of engine being built. Some have more work content than others.

One of the first operations at the line is to fit the crankshaft and bearings; the bearing races are pre-heated prior to being pressed into place. The operator also needs to measure the casings in order to fit shims to allow for the correct end-float on the crank.

This varies slightly due to small material differences between each casting. Next the gear assemblies are fitted, having been delivered pre-assembled from an outside supplier. Sealant is applied automatically, then the cases are joined together. Cylinders, complete with pistons, are attached followed by the pre-assembled heads.

Each station has a production schedule for that day’s workload, indicating the number and type of engines to be produced and by what point in the day. They also have tooling sheets for each engine and visual assembly guides for certain operations.

All engines are hot-tested at one of the eight test benches. On the two-stroke units the test system is required to calibrate the exhaust control valve. After the hot test is completed, the engine oil and filter are changed to ensure the engine is completely fresh and the valve clearances are checked again and adjusted if necessary.

Depending on the model of bike to which the engine will be fitted, components such as front sprockets or fuelling systems (carburettors, injector bodies, air-boxes, etc.) are not attached until the engine in is the frame. This is due to restricted access space on certain variants. 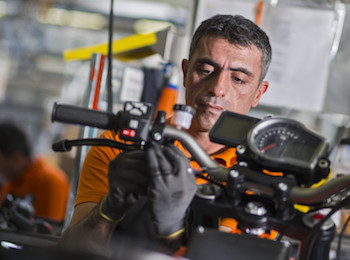 AMS: What range of engines do you build here?Martin Walkner: We produce ten different engine types; there are four two-stroke engines, ranging from 50 to 300cc capacity. These are mostly for off-road competition-based bikes but they are also used in the EXC model, which can be used on the road. There are six four-stroke engines.

Do you produce engines for the Husqvarna brand and are these different to the KTM versions?Yes we do produce for Husqvarna. The engines are [mechanically] much the same, with just some small differences in the gearing. We produce all the engines for KTM and Husqvarna with the exception of the 85cc single cylinder, but as of 2018 we will also build this engine here.

Will you need to make any changes to production operations to accommodate the 85cc unit?No. We can add this without any problems. It’s very similar to the 125cc engine and the assembly procedure is almost the same.

Do you mix lines for all these engine types?We have just two assembly lines and they are both able to produce all the engine types. There are small differences in the layouts; the carriers on Line 2 are a little longer to produce the two-cylinder [V-twin] engines and there is a special station on Line 1 for the two-stroke engines. So we do split production based on this, with Line 1 mostly building two-stroke and LC4 engines and Line 2 producing the RC8 twin cylinder, 450-500cc and 250-350cc single cylinder units.

What’s you current annual output?This year we will produce 130,000 units but there are plans to increase this to 200,000 by 2020. This is the plan; to increase volumes each year across all production operations, not just engines.

Is machining the only automated process in engine production?Yes it is. We have 19 CNC centres for the machining of cylinder heads and engine cases. We do have some semi-automated tooling in sections of the assembly line, mainly to assist the worker. It’s very hard to automate the processes for assembling engines; we have a lot of variation in engine types.

Have you made any recent investments in tooling or equipment?We are investing every year in different tools and other devices. We have eight engine test benches and you need a lot of different devices to connect to the engines. Also we use a lot of different tooling in the engine case pre-assembly area to fit the bearing and seals. Whenever we get new engine types to build it requires new tooling for both assembly and testing operations. We hot-test 100% of the engines produced here, so you need to make the process of quickly attaching the different types of engine to the test bench as simple as possible.

Which area is the bottleneck in the process?All the test benches are fully utilised all of the time so this area can become a bottleneck. To improve this you have to decide to add more test benches or you choose not to 100% test some of the engines that have perfect reliability. These are possible options but we are not at that point as yet. We are trying to improve efficiency and increase production output without making big changes to the building.

Looking at increasing production volumes, how many shifts are you currently running? Normally we are running two shifts on the assembly lines and two shifts plus two people on a nightshift for the test benches. A lot depends on demand from main production.