Does 3D printing add up?

Additive manufacturing has long assisted prototyping, but OEMs are now exploring its uses in production 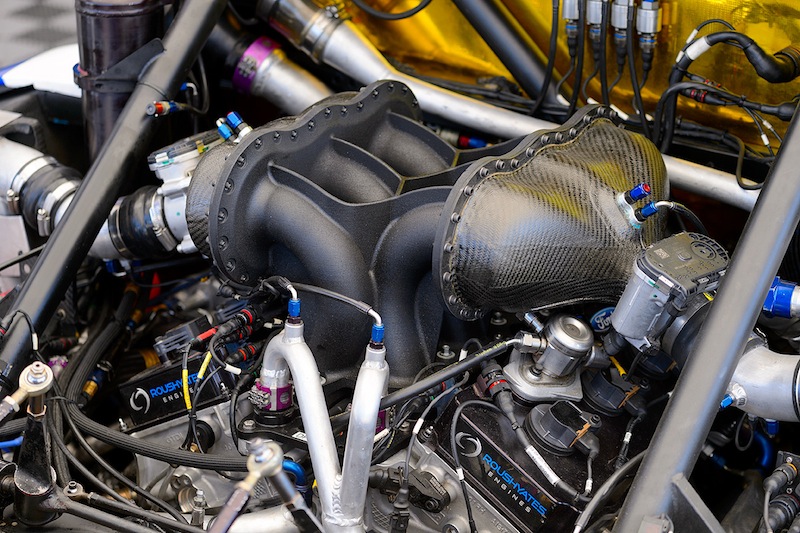 There are, of course, many hurdles to overcome before the world sees a 3D-printed part on a high-volume production car, not least process speed. However, the fact that several OEMs are introducing such parts into low-volume, special or race models, shows there is growing confidence in additive manufacturing as more than just a useful development tool. Virtually unlimited design freedom and zero tooling costs are two of the major advantages of the process, and these are clearly proving too attractive to ignore, for both plastic and metal parts.

BMW, for example, is already using SLS (selective laser sintering) to produce aluminium water pump wheels for powertrains, and is now considering the adoption of CLIP (continuous liquid interface production) technology, whereby parts are ‘grown’ rather than created layer-by-layer. Additive manufacturing is also reshaping the landscape at Lamborghini and Ford, particularly for track cars. FDM (fused deposition modelling) is the technology of choice at Lamborghini, where the plastic parts produced include profiles and air conducts. At Ford, the latest success story is an intake manifold.

Some OEMs are even exploring additive manufacturing for entire builds. Local Motors, for example, has recently produced the world’s first 3D-printed electric car, while Audi says that all of the metallic parts deployed in a recently produced scale model of a Silver Arrow Auto Union Typ C were made using additive manufacturing. The company is one of many with the ultimate goal of applying metal 3D printers in series production.

This review looks at the current projects of various OEMs in their quest for greater integration of additive manufacturing processes, including the potential for mainstream production.

The German OEM says it has now manufactured its 500th powertrain fitted with a 3D-printed water pump wheel for its DTM racecars and Z4 GT3 customer cars. The one-piece precision component, which is subject to high stresses, is made from an aluminium alloy using SLM (selective laser melting) technology.According to BMW, 3D printing as a production method has turned out to be ideal for these small-batch products. Firstly, it allows for the inclusion of design refinements in the six-bladed centrifugal pump wheel, which would otherwise require much greater effort with alternative production methods. Using SLM, however, it is possible to achieve the ideal aerodynamics required of the component for the DTM race series. A further benefit is that no complex tools or moulds are needed for production.

Udo Haenle, head of Production Strategy, Technical Integration and Pilot Plant at BMW, says: “Components made with additive manufacturing give us a lot of freedom in the production process. We see major potential for its future application in series production as well as for new customer offers, such as personalised vehicle parts or spare parts supply.

“At the BMW Group Technology Office in Mountain View, USA, we are now even conducting a first test run with new CLIP – continuous liquid interface production – technology,” he adds.

CLIP is a breakthrough technology that grows parts instead of printing them layer by layer. It works by projecting light through an oxygen-permeable window into a reservoir of UV-curable resin. The build platform lifts continuously as the object is grown, which is said to make it considerably faster than alternative additive manufacturing methods. 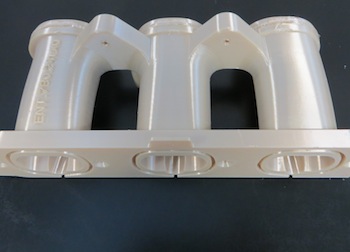 At its headquarters in Sant’Agata Bolognese, Italy, Lamborghini makes use of Stratasys FDM (fused deposition modelling) 3D-printing technology throughout the entire lifecycle of its parts, from rapid prototyping applications to the direct digital manufacturing of end-use components. Indeed, Lamborghini’s deployment of the technology to print vehicle-ready parts is exemplified within the Blancpain Super Trofeo, a major international racing series organised by the company.“We use Stratasys technology to produce FDM-printed end-use parts because, quite simply, it meets all the requirements demanded of it,” explains Fabio Serrazanetti of Lamborghini’s car-body technical department. “The capability to very quickly output highly durable components within a seemingly unlimited design scope offers an unprecedented advantage. We use our Fortus 3D production systems to typically – but not exclusively – produce high-performance aesthetic parts, including profiles and air conducts.”

Stratasys has also helped to accelerate Lamborghini’s rapid prototyping applications by reducing costs and enhancing workflow efficiencies. The most recent machine to arrive is a Stratasys Fortus 400mc with a large build envelope. Here, an array of different exterior parts are produced – from section bumpers, grills, aesthetic frames and various engine-bay components – to a number of interior parts such as door panels, seat covers and steering wheels, along with conveyors and air heaters.

The 3.5-litre EcoBoost engine used in the Chip Ganassi Racing with Felix Sabates Daytona Prototype car features 3D printed parts such as the intake manifold (see top image). “3D printers have totally changed the development process for our Daytona prototype race cars,” says Victor Martinez, EcoBoost race engine engineer. “The process has advanced at such lightning speed in recent years that in a matter of hours we can create real, usable parts.”

Ford first started to explore 3D printing decades ago, purchasing the third 3D printer ever made, in 1988. Initially, the company used 3D-printed parts for prototype buttons, switches and knobs. As the technology has improved, the quality of 3D-printed parts has become remarkably precise, and the parts themselves have become increasingly usable. In fact, so smooth and precise has the finishing process become that 3D-printed parts are now fitted to prototype vehicles built for durability testing, and on the Ford racecar which won the 53rd running of the gruelling 24 Hours of Daytona last January.

Of course, in the competitive world of endurance racing, the push for increased reliability and horsepower never stops and, in Ford’s rapid prototype lab, it doesn’t have to: “We have the ability to design an entirely new part and, one week later, have that part in hand,” says Martinez. “This lets the engineers who develop our cars – both for road and track – spend more time testing, tuning and refining.”

Local Motors says it has created the world’s first 3D-printed electric car. The LM3D Swim, which will be available to order next spring, will cost $53,000. Thanks to the flexibility of 3D printing, unique body shapes can be accommodated, and so orders of the car could conceivably include individually tailored designs. Manufacturing and delivery of the vehicles is expected in early 2017. 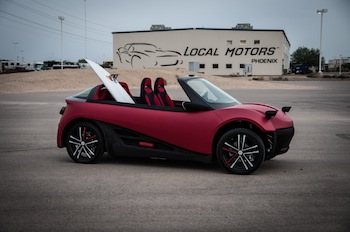 Local Motors has applied 3D printing to an entire vehicle, the LM3D Swim, which will enter the market in 2016

“We are using the power of DDM [direct digital manufacturing] to create new vehicles at a pace unparalleled in the auto industry, and we're thrilled to begin taking orders on 3D-printed cars this year,” says CEO Jay Rogers.Local Motors plans to release several new models in the LM3D series throughout 2016 while pursuing federal crash testing and highway certifications. The company also hopes to work with partners including IBM and Siemens on the development of a range of connectivity and monitoring technologies that will help to make driving safer and more efficient. All cars in the LM3D series will be built at a new Local Motors micro-factory in Knoxville, Tennessee.

Audi Toolmaking has produced a model of the historical grand prix sports car Auto Union Typ C from the year 1936, and the company is now examining further possible applications of metal 3D printers for the production of complex components. At the same time, Audi is creating important synergies with toolmaking in other parts of the Volkswagen Group.

“We are pushing forward with new manufacturing technologies at Audi Toolmaking and at the Volkswagen Group,” confirms Hubert Waltl, Audi’s board of management member for production and head of toolmaking at the Volkswagen Group. “Together with partners we are constantly exploring the boundaries of new processes. One of our goals is to apply metal 3D printers in series production.” 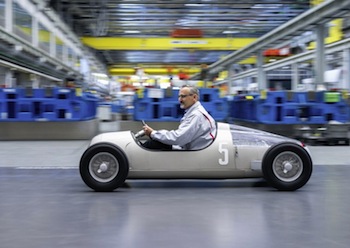 Audi Toolmaking has used 3D printing to produce all the metallic parts of the Silver Arrow model Auto Union Typ C on a scale of 1:2. For this purpose, selective laser sintering (SLS) of metallic powder with a grain size of 15 to 40 thousandths of a millimetre was deployed.Audi Toolmaking is currently using 3D printing to produce components out of aluminium and steel. At present, this process can be used to make shapes and objects with a length of 240mm and a height of up to 200mm. The company says that printed components achieve a higher density than ones made by die casting or hot forming.