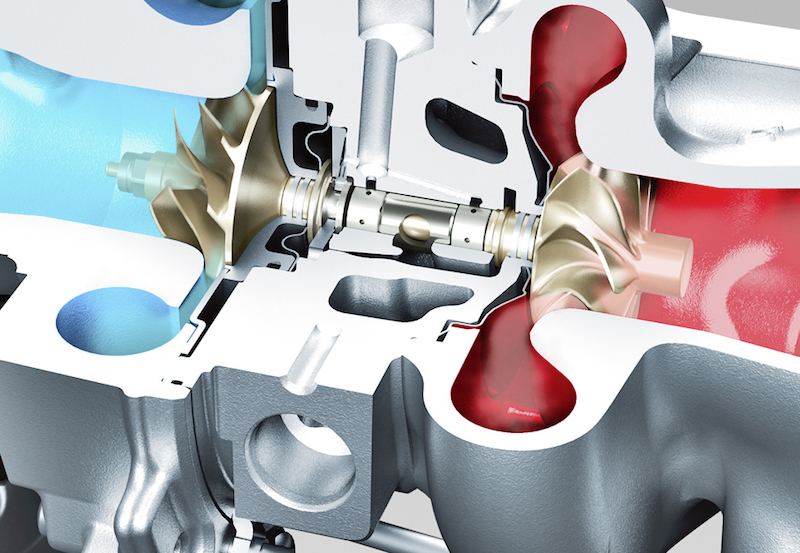 Europe has the highest fitment rates for turbochargers, but other major markets, such as North America and China, are catching up. They are standard on diesel engines in Europe and North America, where diesels cannot to meet emissions standards without one and are increasingly common in petrol engines. Turbochargers are also being developed for hybrid and indeed electric and fuel cell powertrains, although in the case of the latter two applications the turbocharger uses different technology and designs to those used on petrol or diesel engines.

Supply structureCommonly turbochargers are made by specialist suppliers, with little in-house production by the car companies; Toyota in Japan is an exception to this rule although the volumes are modest by comparison to those made by the major turbocharger suppliers. At the tier one level, there are six major companies; four long-established players – Honeywell, BorgWarner, Mitsubishi Heavy Industries (MHI) and Ishikawajima Heavy Industries (IHI) – and two recent entrants, namely Continental and a joint venture between Bosch and Mahle. In addition, there are a number of Chinese suppliers delivering into the Chinese market, Hyundai-WIA in Korea (using technology licensed from IHI) and, in the heavy truck market in North America, Cummins.

Honeywell and BorgWarner lead the European and North American markets by some distance, from the two Japanese companies and the two newer European entrants, although the four smaller players are winning market share as the use of turbochargers rises. In Japan and Asia, the two Japanese companies – and licensee partners – tend to dominate the market.

Continental turbocharger used on the 2.0-litre TFSI EA888 engine on the Audi A3

Manufacturing geography In Europe, for example, Honeywell has six major plants involved in turbocharger production. Compressors, turbine wheels and other components are made in Waterford, Ireland. It buys in all its housings and then machines most of them at its assembly sites in France, Italy, Romania, Slovakia and the UK. The Slovakian plant is its newest, having opened in 2014 and is used mainly to supply German plants; the French plant supplies Renault and PSA mainly, while the Italian factory supplies Fiat and the German car companies. The UK plant supplies the truck market.

By contrast, BorgWarner has four main turbocharger plants in Europe, in Germany, Hungary, Poland and the UK. BorgWarner is more of an assembly operation than Honeywell and makes greater use of external machining for housings in particular. The UK factory has recently developed from its commercial vehicle origins and now supplies turbos for JLR’s Ingenium diesel engines. The Japanese suppliers, MHI and IHI, also have a presence in Europe: MHI’s European plant is in the Netherlands and is an important supplier to the PSA and VW especially, whereas IHI has factories in Germany and Italy from where it supplies Fiat, VW and Mercedes. Both Japanese suppliers have extensive operations in Asia and are expanding in North America. MHI is in the process of completing a global expansion to take its turbocharger capacity to 10m units worldwide; the most recent stage of this has seen a new 600,000 upa facility opened in Indiana to support growing turbocharger demand in North America.

Of the new entrants, Bosch-Mahle has two operations in Europe, in Germany and Austria, and has opened a factory in China, to supply VW. Continental and Bosch-Mahle have established their own machining operations as part of their initial entry into turbocharger production – in order to optimise their understanding of the technology and processes involved – but will gradually increase the use of external suppliers as volumes rise. They also use external casters for the housings: the aluminium housing used by Continental in the turbochargers supplied to BMW is made by a German supplier, Handtmann. 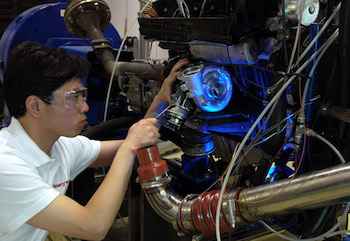 Turbocharger fitment rates and volumes will grow through a combination of the naturally increasing fitment on petrol engines worldwide caused by tougher and tougher emission rules, and the gradual reduction in the percentage of the market accounted for by diesels. Europe remains the world’s largest diesel market, but as European governments and the European Commission address the problem of declining urban air quality, the pressure to reduce diesel use, despite the evidence that modern diesels emit significantly less pollutants than in the past, will in turn boost petrol or petrol-hybrid, or even electric and fuel cell powertrains.

These powertrains will use either conventional turbochargers or one or other of the new forms turbocharger technology under development. Turbocharger companies have spent a great deal of effort in recent times improving the design, introducing titanium impellers (transferred from aerospace), oil-free bearings, sheet steel housings and, more recently, various forms of electrical assistance to boost performance.

Material choices Although there are several new turbocharger technologies under development, existing technology will remain dominant for many years. Consequently, the turbocharger companies are working on ways to improve existing turbocharger performance. For example, BorgWarner and Benteler developed a sheet metal turbo housing for Volvo’s new four-cylinder engine series: Volvo believed this would offer weight saving and design advantages over traditional cast iron or cast steel housings but in practice it is understood that the commercial benefits are not as great as anticipated and weight saving can be better achieved through other means.

Continental and BMW developed a turbocharger with an aluminium housing for the three-cylinder 1.5-litre engine used on various Mini and 1-Series models; using aluminium for the housing involves integrating the cylinder head cooling system into the turbocharger, to avoid the aluminium housing over-heating and melting. This approach was possible on an all-new engine design – as was the case with the 1.5-litre engine – but clearly much more difficult, if not impossible, on an existing engine design; in such cases, new engine iterations will continue to use cast iron or cast steel.

Diesel turbos invariably use various grades of cast steel for the housing, whereas petrol turbo housings use either cast iron or more commonly cast steel. In the cast iron and steel housing market, there are numerous suppliers and a still fragmented supply base, particularly in Europe. This encompasses Wescast (which has major operations in Hungary especially and is owned by the Chinese group Bohong), the private French company St Jean Industries and a large number of German companies such as Hasenclever, Dieckerhoff and Erla (which is part of the Indian group Dynamatic). Although Honeywell and BorgWarner produce some of their own castings, they do not intend to increase their activity here, instead focusing on producing impellers, vanes and cartridges (i.e. the core internal parts of the turbocharger) and assembling the finished units.

Once the casting has been made it has to be machined, either by the casting company, the turbocharger company, or by a specialist machining company; in Europe there are two such specialists, both German, Schlote (a private company) and Zelter (part of the giant Indian group, Amtek).

Technological developments and expanding manufacturing geography Technical change is continuous in this sector as elsewhere in the automotive supply chain; for example, Continental has recently launched a new turbocharger which uses RAAX – radial axial – technology. This is used on the 2.0-litre TFSI EA888 engine on the Audi A3. Compared to conventional units the key difference is a new blade which cuts the inertia of the turbine wheels by up to 40%. Consequently, a RAAX turbocharger can respond faster to engine load changes and boost pressure more quickly than conventional units. Initially these turbos will be made at Continental’s plant in the Czech Republic, but will be made at its Chinese plant and, from 2018, also at its new North American plant, a development which highlights the expansion in the manufacturing footprint of turbocharger production especially well.

Here there are five main systems in development which are either in low volume use today or still in the development phase: 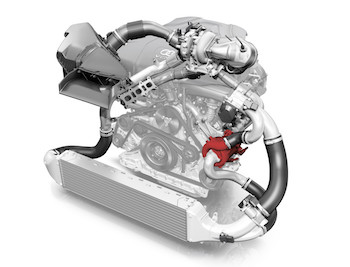 • E-chargers, or more properly electric superchargers, which involve an electrically-driven mechanical compressor (or supercharger) working alongside a conventional turbocharger. The e-charger draws power instantly from an electric motor and overcomes the problem of turbo lag. Although turbo-lag is measured in units of less than a second this is seen as undesirable in terms of vehicle performance and customer acceptance; hence the addition of the on-demand, immediate boost from an e-charger system. The first car company to deploy this is Audi using technology developed by Valeo but the turbocharger companies are also working on similar technologies. E-chargers currently account for less than 0.5% of the market but will gradually be introduced on low volume, top-end versions of mainstream vehicles such as the SQ7 (the performance version of the Audi Q7); Mercedes is expected to offer this on its AMG models in the near future and by the early 2020s this technology is expected to be applied on a wide variety of vehicles, especially in Europe.

• Fully electric turbochargers: these would involve a complete redesign and the integration of the basic turbocharger, electric motor and the compressor in the e-charger system into one unit; a key issue here is the design of the pipework and tubing and integrating this into the engine. Although under development, it is not expected to see the light of day in commercial applications before the mid-2020s.

• Turbo-compounding or, in Honeywell’s terminology, electric turbo-compounding: this uses the exhaust gas a second time, after it has passed through the turbocharger and back through the engine. A second turbocharger is fitted downstream of the first. This system is currently used on heavy duty trucks and was also used by Porsche on the 919 raced at Le Mans. In the long term it will likely be used in the light vehicle market but probably not before 2025 or later.

• Motor-assist turbochargers: developments here are led by MHI and these entail mating a conventional turbocharger to a high-speed motor generator. Applications are expected from around 2020.

• Electric air compressors for fuel cells: maximising and boosting the performance from fuel cells is not possible using a modified conventional turbocharger and impure air as this would damage the integrity of the fuel cell itself; Honeywell and others are understood to be working on systems using an electric supercharger and additional electric motor to boost fuel cell performance. The first commercial applications are expected in the mid-2020s.

The electric systems described above also require 48-volt electrical architectures to be widely deployed; if the adoption of these systems accelerates faster than currently expected then we can expect to see associated technologies – such as the electric turbo solutions mentioned above – also deployed more widely and earlier than suggested above.