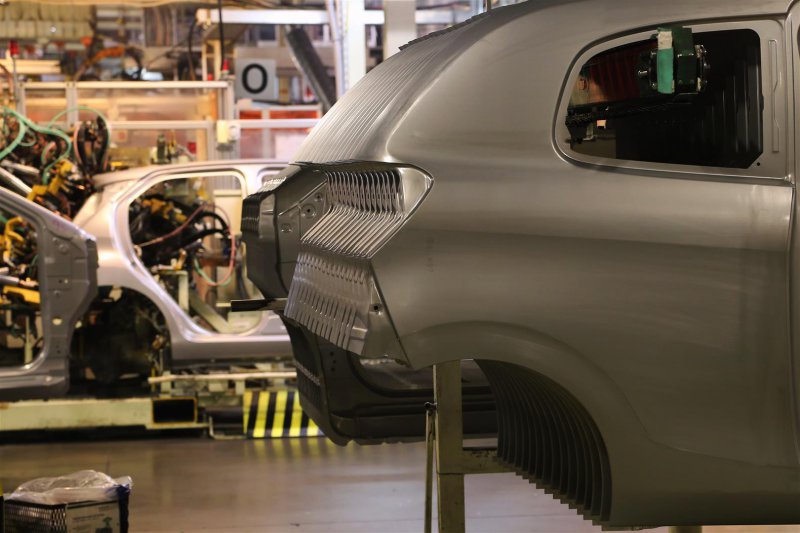 Four of the Japanese vehicle companies have manufacturing operations in Europe: Honda, Nissan, Suzuki and Toyota. Nissan’s UK factory in Sunderland is widely regarded as one of the most efficient in Europe, while its Spanish factory has survived the recession well. The Barcelona plant will, later this decade, make a pick-up truck for Mercedes. Meanwhile, Suzuki, whose European strategy has lacked direction and clarity in recent years, has designated its Hungarian factory as an important manufacturing hub in its global plans. Toyota, with car plants in the UK, France and Turkey, an engine and transmissions plant in Poland and a joint-venture car plant with PSA in the Czech Republic, has the widest European production footprint – but also has important questions to address regarding its UK operations’ long-term line-up. Honda, with a small plant in Turkey and a larger, integrated vehicle and engine plant in the UK, has retrenched in recent times, shuttering one of its assembly halls at Swindon.

This review looks in detail at what is taking place at the Japanese vehicle companies in Europe and the role of their European factories in their evolving corporate strategies, noting how each OEM is now using or will soon use these operations as an international global supply point for at least one vehicle made in the region.

The vehicle plant has two assembly halls, although the smaller unit (Plant 2) was shuttered last year owing to falling sales of the models made at Honda UK. Currently, it produces: the Civic, in hatchback and estate (Tourer) formats, as well as the performance Type R model; the CR-V; and the Jazz, although the latter is due to finish production by Q3. The CR-V will also disappear by 2017, with production shifting to Canada, at which point Honda Swindon will make only the five-door Civic for global markets.

This reflects a new strategy at Honda, which centres on making each of its major vehicle assembly plants into global or regional production hubs. With declining European sales of the CR-V in particular, it was difficult to justify continuing production in the UK after the introduction of the new model; this change will mean that UK production will be limited to 120,000 units per annum, against a notional capacity of 250,000, although the shuttering of Plant 2 reduces Swindon's effective total capacity by 100,000.

Although the reduced production and narrower line-up is something of a disappointment for Honda UK, its future is secured, although on a smaller scale, and it will receive an investment of £200m ($303.7m) to make the new Civic, which Honda also plans to export to the US at a rate of 30-40,000 units a year.

In Turkey, Honda operates a small plant with a capacity of around 30,000 units per annum, although this could be expanded to 100,000. Currently, the only model made there is the Civic sedan, for the local and nearby export markets. It had been expected to add a localised version of a Fit/Jazz replacement later in the decade but Honda’s decision to make each plant into a global or regional production hub may mean that this plan is shelved. 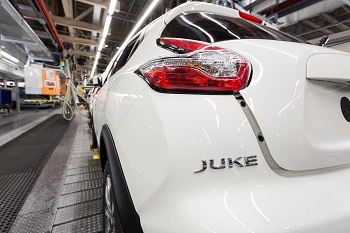 Nissan has allocated the next-generation Juke to its UK plant at Sunderland, which has a total capacity of 550,000 units
Nissan continues to invest at Sunderland
The OEM operates two vehicle plants in Europe, in the UK and Spain, but from 2017 its new Micra small car will also be made by its partner Renault at the Flins plant near Paris. Although its UK plant at Sunderland has produced over half a million vehicles in each of the last two years, and has capacity to make at least 550,000 units, recent press reports have cast doubt on its continued production of the Juke, the new version of which is due in 2018; these reports suggest that production may switch to a Renault plant in France. Many of Renault’s French plants are operating at well below capacity, and with the French government having recently increased its stake in Renault, there is pressure on the company to increase domestic vehicle production.

Nissan Sunderland is widely regarded as one of the most efficient plants in Europe and is also regularly ranked as one of the OEM's top five plants worldwide. Despite the reported concerns about production of the next Juke, and as if to confirm its long-term commitment to the UK, in June this year Nissan announced that it would install a new press line, at a cost of around £37m, which will be operational by 2017.

The Sunderland plant’s line-up consists of the Qashqai and Juke crossovers, the Leaf electric vehicle and the Note small car. Series production of the Infiniti Q30 and QX30 will start in Q3 2015, although trial build started earlier in the year. The Qashqai is one of the most successful vehicles of recent times, with the two-millionth unit produced in November 2014. In July this year, reports emerged that the Qashqai would be exported to the US from 2016.

In addition to vehicle assembly, Nissan Sunderland moulds and paints bumpers; assembles batteries for the Leaf; casts engine blocks and heads; machines camshafts; and assembles a large proportion of the engines fitted on its assembly lines. It also exports engines to the Barcelona plant and various Renault factories, while also importing some engines from Renault.

In Barcelona, Nissan produces the Pulsar compact car, its long-awaited replacement for the Almera; this is made on a two-shift basis to cope with demand. It also makes the NV200 van, in conventional engine and battery-electric formats, plus the NP300 Navarra pick-up truck; this will form the basis of Renault and Mercedes versions from 2016 and 2017 respectively, with all three brands’ models also due to be made at the Renault plant at Cordoba, Argentina, for the South American market. At the 2014 Madrid motor show, Nissan said it would produce eight different models, so with the three pick-ups, two versions of the NV200 and the Pulsar, two more models may soon be added to the growing line-up in Spain.

Suzuki prepares for Vitara in Hungary
At its Esztergom plant, Suzuki Hungary produces the Swift, S-Cross and (since March 2015) the Vitara SUV. In May 2015, Suzuki re-allocated some of the retained profits and capital on its Hungarian subsidiary’s balance sheet to its corporate account by carrying out a €156m ($174.8m) equity decrease, reducing the company’s equity by 30%. Suzuki emphasised that this will not have any impact on its production in Hungary; rather, the OEM wanted to make better use of currently dormant capital.

At present, the plant works on a two-shift basis, with the Vitara supplied globally, not just for Europe. The Vitara will play an important role in increasing production which, in 2014, totalled 147,000 units, 9% down on the 161,000 made in 2013 and against a notional capacity of 300,000. The decline was due to the end of production of the SX4 (and its Fiat Sedici sister model) and the Splash (and its Opel Agila sister model); at this time, the factory was also preparing for series production of the new Vitara, which involved an investment of €150m.

With the Vitara now in production, the factory is expected to produce around 165,000 units in 2015. Vitara output is due to be around 70,000 in its first year, with over 70 Hungarian suppliers delivering parts for this new model. Initially, the Hungarian-built Vitara will be sold in over 70 markets worldwide, and this should increase to 100 countries within three years. 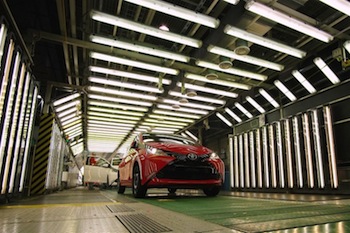 Toyota’s three vehicle plants are fully integrated operations, with their own press, welding, plant and assembly capabilities. In the UK and France, its factories have plastic injection-moulding facilities for dashboards and bumpers, but Toyota Turkey uses external suppliers for these parts.

The UK factory was Toyota's first in Europe, established in the aftermath of Nissan successfully establishing its plant at Sunderland. Located at Burnaston, near Derby, it has two assembly halls with a notional annual capacity of around 280,000 units; however, one of these halls is currently shuttered, having been closed in the last recession. At present, it makes the Auris and Avensis models on the same line, having completed major revisions to both models in 2015. Transitioning to two new, or significantly changed, models at the same time was unusual – in fact a first for the company. Although production of the Auris in the long run seems assured, there is some concern as to whether the Avensis will be retained beyond 2018, when a full replacement of this vehicle is expected.

In Turkey, Toyota builds the Corolla sedan and Verso MPV. Here it has a capacity of 150,000 units per annum, but this will soon rise; in October 2014, the factory was allocated production of a new compact SUV, with the aim of turning out an additional 100,000 units per year from 2016. This vehicle will be smaller than the RAV4, Toyota’s long-established compact SUV, and will give Toyota a presence in the fast-growing European B-SUV market. This good news for the Turkish plant contrasts with the problems it has faced this year with one of its major export markets, namely Russia, where the collapse in car sales has severely hit output from this factory. H1 2015 exports fell by 30% to just under 42,500, almost entirely due to the decline in Russian sales. 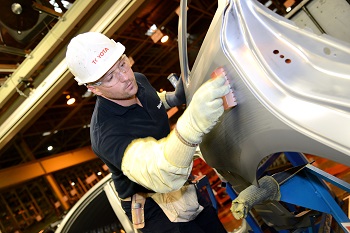 Toyota's three European vehicle plants are fully integrated operations, with press, welding, plant and assembly facilities
Toyota’s plant in northern France makes the Yaris B-segment car. It can make 1,100 units a day on a three-shift system, or just 840 a day on a two-shift system. It mainly supplies the European market, but also exports around 25,000 units per annum to the US. This plant has a press shop with two blanking lines and four press lines, two of 2,300 tonnes and two of 4,600 tonnes, processing 300 tonnes of steel a day; a bodyshop with 200 welding robots and a further 30 for parts handing and the application of sealant; and a plastic injection-moulding shop for the production of dashboards and painted front and rear bumpers, using three injection machines and an automated bumper painting line. Parts for the Yaris come from around 200 tier-one suppliers, a quarter of which are located in France.

In addition to these vehicle plants, Toyota produces engines at Deeside in north Wales, supplied to the UK and Turkish factories in the main, but also to Toyota France and certain other Toyota plants outside Europe, including South Africa. Toyota’s second European engine plant is at Walbrzych in Poland, from where it supplies up to 370,000 1.0-litre engines a year for the Aygo and Yaris. This facility also has the capacity to make around 720,000 manual transmissions for Toyota UK, France, Turkey and South Africa.