Alabama: A sweet home for Honda 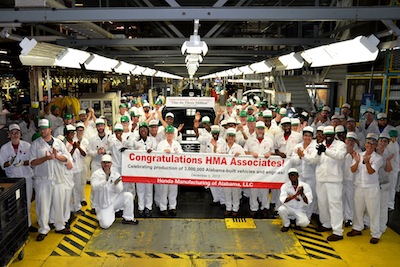 Honda Manufacturing of Alabama (HMA) was selected to make the Acura MDX, which is the most technical product built at the plant. Classed as a light-truck facility, HMA builds three models: Odyssey, Pilot and MDX.

The plant has also been producing Honda’s challenger for the huge domestic pick-up market, the Ridgeline, but its production will be stopped in preparation for an all-new pick-up.

Sitting on a 1,300-acre site, the facility covers over 3m sq.ft and employs a workforce of 4,000. Along with vehicle production, the plant also has a 400,000 sq.ft powertrain division; this provides a total production capacity of 340,000 vehicles and engines per year. The production of V6 engines has recently been extensively upgraded with the introduction of a more automated process.

Jeff Tomko, president of HMA explains: “Current engine production will be moved on to one line in the new facility where it will be able to handle the production requirements of both Line One and Two, including model variations. Today the [engine production] automation level is between 32-35%, so it’s a manually intensive operation. The new operation will be between 65-70% automated; almost double. It will be one of the most highly automated engine assembly lines within a Honda facility."

He continues: “The automation will give us additional quality inspections and checks, and as the engines become more complex and have more variations, this line will have the flexibility built into it to have different engines run down it without the need for a lot of modifications.”

This line-up reflects Honda’s approach to vertically integrated manufacturing operations. While the company has built strong, long-term relationships with outside suppliers, it will always draw on its highly developed engineering competences; the aluminium casting and plastic injection moulding on-site (three injection moulders for bumper and facia production) are good examples.

Honda’s willingness to keep complex assembly operations in-house is readily apparent. Dashboards – often assembled by tier suppliers then delivered to the line at other OEM plants – are put together at Lincoln by Honda associates, in a process which takes 23 minutes per unit. [sam_ad id=17 codes='true']

Servo control
Stamping operations are performed on two hydraulically operated AIDA press lines, now supplemented by the addition of a new servo-operated press. This has been introduced to offer greater control when forming harder steels. The presses provide four-stage forming for class-A panels and feature fully automated handling and stacking operations; die changeover can be completed in seven to eight minutes. A subcontractor carries out pressings for smaller sub-structures.

The bodyshop is highly automated (80-90%), with 200 robots carrying out handling and welding operations, and can produce up to 1,500 units per day.  One of the few manual operations in this area is the loading of doors onto a rotating station for (robotic) welding.

In common with many OEMs, Honda operates a just-in-time parts delivery process at Lincoln, with four hours' worth of parts kept on-site. The entire vehicle production output is track-tested as part of the quality control process, prior to delivery. At present approximately 10% of the vehicles manufactured at HMA are destined for export.

• 2001 ­– The first Odyssey mini-van rolls off the production line

• 2008 – Ridgeline production transfers to HMA; the Accord V6 sedan is added to Line Two