Additive manufacturing is seeing wider use across automotive production, from prototyping to tooling 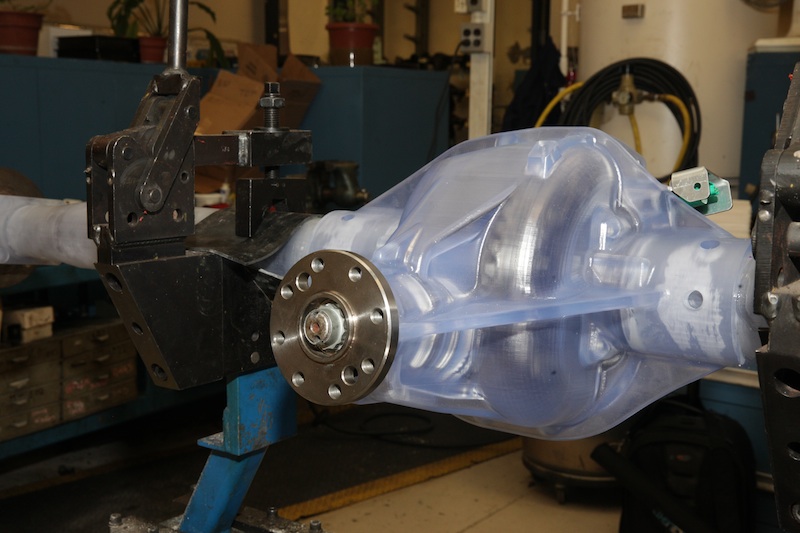 Despite all the efforts of the automotive industry to develop more economical engines or aerodynamic body shapes, one of the most basic determinants of the efficiency of vehicle performance remains the consistency with which lubricant fluids are distributed over moving parts. One crucial area in that respect is the interface between the power transmission system and the wheels – the interior of the axle assembly.

Visual inspection remains an essential means by which testing procedures can validate whether lubricant distribution is uniform and effective. A long-established technique has been to cut holes in the housings of test axles and then fill them with a transparent material of some sort so that they act as windows through which the motion of the fluids can be scrutinised while the axles are put through a test sequence on a dynamometer. But that procedure also suffers from an inhibiting factor as the way the fluids react to agitation and movement means that they change from being clear to opaque, with the result that it soon becomes difficult to judge the extent to which the fluids are actually being distributed around the moving parts.

Transparent operation
That certainly used to be the experience of Tom Sorovetz, casting engineer with Fiat Chrysler Automobiles (FCA). “We used to use flashlights to try to work out what was happening, but we could barely see anything,” recalls Sorovetz, who works at the company’s Chrysler Technology Centre (CTC) in Michigan. But that procedure is now a thing of the past because, as Sorovetz explains, FCA has developed a clever application for additive manufacturing that effectively solves the problem.

That is to use the technique to make full-size, transparent facsimiles of axle housings which are also robust enough to be mated with real axle assemblies that are being tested. “All the other parts are metal prototype or production parts,” he confirms. In consequence, it is possible to see clearly the way the lubricant material acts – and most importantly how it is distributed – as the axle is put through a test sequence that not only involves it being run at high speed but also tilted laterally and longitudinally to simulate the effects of driving on inclines and around corners. “We can see everything without the need for any additional lighting,” he states. “What we want to check is that no area is starved of oil at any time.”

Sorovetz says that the approach was pioneered as far back as 2009, since when it has been used in the development of six new axle families; it has been continuously refined to reach its present degree of reliability. He indicates that engineers involved in such projects have, for instance, learned to keep test sequences short enough to prevent excessive heat build-up that might lead to degradation of the additively manufactured parts.

FCA utilises one of the oldest additive manufacturing techniques around – stereolithography, in which a laser beam ‘cures’ successive layers of resin to make the workpiece. The CTC team uses a SLA 7000 machine from 3D Systems.

Robust resin
An important aspect of the technique that Sorovetz highlights is the resin involved, DSM SOMOS 11120, which is very robust and means that test routines using the models can simulate extremes of performance, not least those involving high axle rotation rates. “We can simulate on-road speeds as high as 140mph,” he confirms, adding that a typical test cycle lasts 20-30 minutes. Three such cycles may be involved in a new axle development project.

The SLA models used in the testing are produced in one piece and measure roughly 14x12x10 inches. More pertinently, they can be made in just 12 hours, so iteration between design and testing can be carried out within a single day if necessary. Sorovetz says that another crucial factor in enabling a compressed testing and reporting sequence is simply that all the people involved work on the same site. Some 14,000 personnel, including 7,900 engineers, work at the CTC, which is co-located with FCA’s US headquarters. “There is no problem getting everyone involved in the same room,” he explains. “They can watch the part being made as well as the testing procedure and afterwards can pick the part up to examine it as closely as they want.”

Sorovetz says that the use of additively manufactured parts in dynamic testing as opposed to simpler ‘form and fit’ routines is now widespread with the CTC. Wind tunnel testing is another area in which the approach is used. As far as axle development projects are concerned, specific quantifiable benefits are difficult to isolate, but he says that FCA is entirely convinced of its value as an integral part of the whole process; its application is now regarded as routine.

Tools & fixtures
Additive manufacturing is also supporting production at Volvo Trucks in a way that shows how the use of the technique solely as a rapid prototyping tool to check the form and fit of parts has now been left well behind. At Volvo, the technology is being used to make tools and fixtures to support shopfloor production operations at the company’s engine plant in Lyon, France. Volvo says this is massively increasing the speed and flexibility with which such tools can be made available to assembly personnel.

"We can see everything without the need for any additional lighting. What we want to check is that no area is starved of oil at any time"
– Tom Sorovetz, Fiat Chrysler Automobiles

There are considerable savings in both time and money. Volvo states that, compared with conventional metal tools, the lead-time for producing additively manufactured counterparts can be slashed from 32 days to just two – a reduction of 94%. The drop in costs can be just as dramatic – additive tools can be made for a material cost of €1/cu.cm ($1.1/cu.cm) compared with up to €100/cu.cm for metal alternatives. The tools, such as grippers for the manual handling of workpieces, are made from an ABS plastic material by means of the fused deposition modelling (FDM) technique, which effectively means they are extruded. They are made with the Fortus 3D FDM system from additive manufacturing technology supplier Stratasys, specifically a Fortus 250 machine using ABS 430 material.

Patrick Kieffer, Stratasys’ marketing manager for France and Iberia, says that the system at Volvo Lyon has been in operation for nearly two years and represents one of the most intensive and successful applications of additive techniques for the manufacture of production-related equipment. Items made so far include clamps, jigs, supports and tool-holders. Kieffer confirms that the machine is now routinely in operation 24 hours a day, and made more than 30 different tools during its first three months. 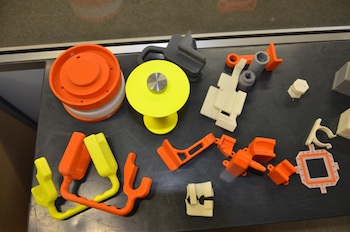 The advantages that additive techniques can provide in this type of application are considerable, says Kieffer. Additive manufacturing has few limitations in terms of the geometrical complexity of the parts it can make and therefore any tools made in this way can usually be shaped for maximum ergonomic efficiency. By virtue of being made from a plastic material they are also likely to be lighter and easier to handle than a metal counterpart. Moreover, though ABS is a robust material well able to stand up to the rigours of shopfloor life it is also less likely to cause damage to an actual production part should there be an accidental impact between the two.

Interestingly, Kieffer adds that what might seem one of the more trivial capabilities of additive manufacturing – the ability to make parts in different colours of otherwise identical material  – can in fact be very valuable, since it can be used to help identify different tools for different jobs. At Lyon, colours are used to differentiate the tools used for the two vehicle marques made there – yellow for Volvo and red for Renault.

At the most fundamental level, Kieffer says that the mix of low-cost, geometrical variability and rapid turnaround means that the technique naturally lends itself to a manufacturing environment characterised by high product variability – increasingly a hallmark of the automotive industry. He confirms that Stratasys sees the manufacture of inexpensive but versatile shopfloor tooling as an area with significant growth potential in the immediate future, with automotive a key target industry.