After launching in Romania, next August Ford is to switch production of its 1.5 EcoBoost engine to Bridgend, Wales. AMS spoke to assistant plant manager Neil Davis to find out how the already stretched facility plans to cope.

AMS: How many engines do you make here? 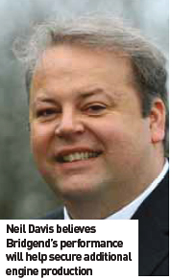 Neil Davis: We make petrol engines only and the plant operates 24 hours a day, 365 days a year. We build one every 21 seconds – three every minute. We build the 1.6 GTDi, also known by Ford as the 1.6 EcoBoost, and various smaller capacity PFI engines. Unlike the GTDis, those don’t have direct injection. We also make SI6 (Short Inline Six) for Volvo Cars Corporation (VCC) – which also used to go into the Land Rover Freelander – and various V6s and V8s for Jaguar Land Rover (JLR).

AMS: How long has your Sigma four-cylinder series been running?

AMS: Do the latest engines echo the original design?

ND: They share a lot of parts but the main differences are blocks and heads. The block of the GTDi is machined through the same line; the heads are machined from a different line, a flex line that can build 280,000 units a year.

We have support from another flex line which makes V8 and GTDi heads,and that accounts for the other 150,000 units that we build in total.

AMS: Why does Bridgend build the 1.6 GTDi (EcoBoost) for North America’s Escape? Surely Ford could manufacture it in the US, near the Kentucky plant that makes the vehicle?

ND:We are the only plant in the world building the 1.6 GTDi. I think that’s because a huge amount of our total capacity for GTDi goes to Europe. It’s also going to go into Elabuga in far Russia and a big chunk of our coming capacity is going straight to China.

AMS: So even with the exchange rate risk between sterling and the dollar, it makes economic sense to make engines in Wales for the US market?

ND: It’s a shipping cost, mainly. It’s public knowledge that Valencia is going to take on some of the build from Genk when it stops building the Mondeo, S-MAX, and Galaxy next year, and some of their engine build is going to North America. That’s because the 2.0-litre EcoBoost (made at Valencia in Spain) is almost exclusively for the North American market.

AMS: Do you see Ford manufacturing the 1.6 or the new 1.5 EcoBoost in the US at some point? ND:We are so stretched on capacity here, maxed out, that

I’m not sure they would find the opportunity to shut the line at Bridgend and rebuild it somewhere else. Everything is relative, that could happen, but right now our European volumes are good. Our American share is shrinking slightly - we were shipping to Hermosillo, Mexico and Louisville, Kentucky, but our volume for the 2014 Ford Fusion will come down as the new 1.5 EcoBoost for that car is coming from Craiova in Romania.

AMS: It seems strange to have started building the new 1.5 at Craiova then take it out of there next year. ND: It’s because of the capacity risk to our current volumes and Craiova doesn’t have the capacity to manufacture it in large volumes. So it makes more sense to build it in Romania in the short term. There’s all sorts of new water-cooled cast componentry on it, a lot more complexity for us.

We were initially worried when 1.5 went to Craiova, but we had senior management agreement that it would definitely come here and that is the plan. They’ve got to start building [the 1.0 Ecoboost] Fox pretty soon at Craiova and that means they will have to shrink the assembly line for 1.5 and ours will grow at the same time, from 2014 and in the years after that.

AMS: Will you phase out building the 1.6 when the 1.5 comes on line at Bridgend next August?

ND: No, we’re going to run it in conjunction with current 1.6 as demand is high. There are another couple of reasons why the 1.6 will stay. One is that in certain markets 1.5 generates some tax relief. The other reason is that in time it will absorb 1.4 and 1.6. That will reduce our complexity and therefore reduce our costs.

ND: We’ll build them alongside one another but naturally there are differences. One example is the exhaust manifold. On the 1.5 the manifold is cast into the cylinder head.

AMS: How is your engine supply business for Jaguar Land Rover and Volvo?

AMS: Which engine are you currently building the most of for JLR?

ND: The V6. Next year will be heavy with the V6 – something like 85% of the volume. We have a very good relationship with JLR and the agreement doesn’t expire until 2020. Another six years is about as good a production supply contract as you’re going to get anywhere. We’d like to think we have ten years of life [left] in Sigma.

So overall, we’re very happy to be building engines that are hugely in demand.

AMS: You’re now building a 182PS version of the 1.6 EcoBoost for the new Fiesta ST. Does that engine cost you a lot more to manufacture?

ND: No. In fact, we already have a 180hp version going into Escape [for North America] so the changes are all in engine calibration and management, and gearbox calibration. There will have been some costs at Dunton, but very little for us.

AMS: Without the recent investment from the Welsh government, would this latest expansion have still happened? (Ford and the Welsh Assembly have agreed to invest £12m ($18.5m) each.)

ND: That’s hard to say. I’d like to think that our performance would have guaranteed us getting the new 1.5, but who knows? I think our performance certainly helps, especially with the team and the crew we have on the shop floor.

AMS: You’ve got capacity constraints at Bridgend but there’s a lot of green space around this site. Could you see another plant going up here?

ND: We’re always out there looking for another engine. We have 2,300 employees currently and there is certainly enough space to employ more. It’s about aggressively looking at the market place and seeing what opportunities are there.