Travel blog: The final frontier with Kia in Pesquería 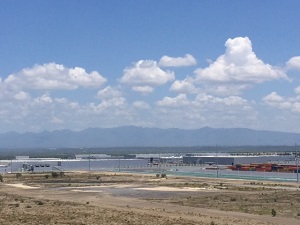 And for my next mission... Mars! Or Monterrey in Nuevo León, which is similarly arid but uncomfortably hotter. At least I have the benefit of oxygen as I journey to Kia's new factory at Pesquería. I'd heard that Kia had been experiencing problems (Houston!) with this development, but as I begin to explore the factory with my guide I quickly concede that a few hitches can be expected when creating a whole new world. In three years of visiting automotive manufacturing facilities (check the archives) I don't think I've seen one like this.

The new Kia factory is vast, packed with the latest Korean technology and seems to be located at an entirely different point on the space-time continuum. In the press shop are two Hyundai Rotem presses which, at 18 metres tall, weighing 3,862 tons and with a combined pressure of 50,000lb, are the largest of any Kia plant worldwide. These automated presses are mesmerically fast, even running at half their full capability of 18,000 strokes each per day. In the bodyshop, hundreds of robots, including more than 300 from Wia, work busily while large screens provide a multi-dimensional view of their activities – though for whose benefit I'm not sure, as there are few people to be seen. The automation level is 85%. But at last we find some humans: four of them, in a glass box, justifying their existence by checking joins and adding the odd bit of welding.

The people quotient increases significantly in the assembly hall, but even here the plant operates on a different level, quite literally. Key components such as seats are delivered from 13 onsite suppliers by overhead conveyors, much as the bodies are transported between shops without being exposed to the elements or cluttering proceedings on the ground. It's all very Blade Runner. At present, 600 Forte compact cars pass through here each day, but this will rise to around 1,000 when the factory hits full capacity of 300,000-400,000 per year. The sedan version has been in production since May and a hatchback will be added shortly; the stampings wait in racks in the press shop.

All of this is being accomplished with unearthly serenity. But what is most astonishing is that this 273,000 sq.m factory, costing a cool $1 billion, was built in slightly over one year. Kia beamed down several thousand Korean engineers, technicians and executives, set up a full manufacturing operation from scratch, then beamed them back up again, leaving behind a colony of just 200 to take charge of around 3,000 local recruits. According to my guide, spokeshuman for the plant Victor Alemán, the secret behind this warp-speed progress was the might of the Hyundai empire. The fact that Hyundai Motor Group includes engineering, construction and steel companies means that it has all the weapons at its disposal for a swift conquest of new territory. Many of the suppliers to the factory, newly located in Pesquería, are also part of this Group.

Not that the company was uninvited – far from it. But the problems I'd been hearing about concern the attempts of a new state government to drag back Kia's incentives to build its first Latin American plant in this part of Mexico, remote from the light-vehicle production hubs in states like Guanajuato and Puebla; besides truck manufacturing, Kia is out here on its own. The rate of infrastructure development, including a rail spur, has declined as a result, though Alemán says this has not stopped production or shipment. The OEM has cleared more space outside the factory to hold the backlog (60% of output is for the US and Canada; 20% for Mexico; and 20% for the rest of Latin America).

I see this for myself when Alemán takes me to the summit of a rocky outcrop which forms part of Kia's 5m sq.m here, and which also hosts the helipad used to bring in the massive structures of the two presses. He'd told me that Kia owns more land in Pesquería than Nissan does at its well-established complex in Aguascalientes, which I had found hard to believe. But up here, turning 180 degrees to gaze across the dry land spreading out before me (step into my astronaut boots and see for yourself), I can now take in the full scale of the operation. Given that the factory is predicted to create around 14,000 direct and 56,000 indirect jobs, and already employs 67% of the local population, the new government should be over the moon that Kia has landed; it has the potential to transform Pesquería – or Nuevo León – in the same way that Volkswagen has transformed Puebla.

A further revelation of this stunning vista lies in the foreground of Kia's gleaming white buildings: an area of scrubland which is the right size and shape for a mirror-image factory. It may as well have an 'H' marked on it for 'Hyundai'. It is not a lack of funds which is preventing this second project from lifting off, but the confused messages of the state as regards the welcome for its new arrival. If I were Hyundai Motor Group, I'd demand to be taken to their leader.