Korea’s smallest carmaker has recently reported record sales, but its only vehicle plant is still underutilised 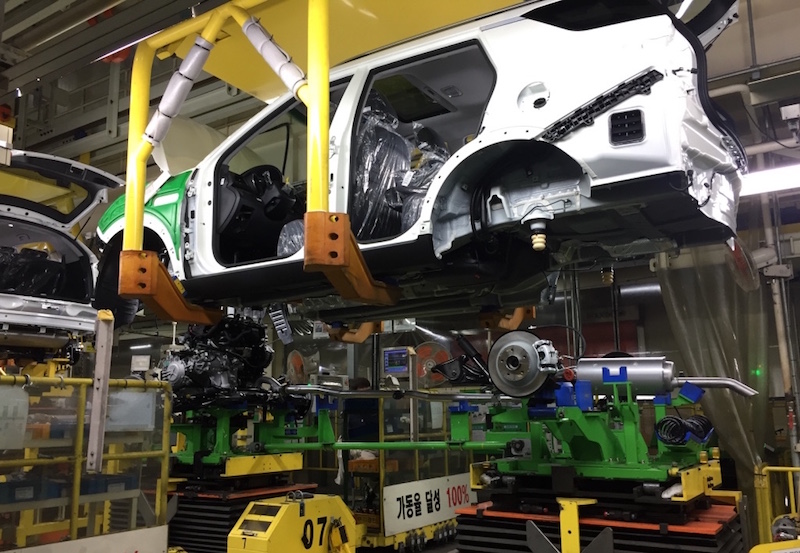 Sales of 12,697 in a month may not seem like much for a mainstream vehicle-maker – and this figure is certainly dwarfed by the 376,109 units reported for June by Korean giant Hyundai – but it represents several records for SsangYong Motor Company. The OEM said that domestic sales of 10,535, up by 8.1% on June 2016, amounted to its highest-ever monthly total and that the H1 figure of 54,184 was also a record, an increase of 5.5% on the same period last year. Attributing these positive results to the popularity of its new large SUV, the Rexton, plus a strong showing by the Tivoli small SUV, SsangYong reported that this was, moreover, its eighth year of continuous growth at home.

The company certainly seems to be heading in the right direction after a difficult decade; the 58.1 billion won ($49.4m) it made in 2016 from selling 155,844 cars constituted its first year of profitability since 2007. SsangYong went bankrupt in 2009 during the financial crisis, four years after SAIC had taken a 51% share to become the first Chinese car manufacturer to make an overseas acquisition. Mahindra & Mahindra came to the rescue in 2010, buying a 70% stake for 522.5 billion won, which was increased to 73% in 2013. Its new Indian owner set about implementing a five-point agenda: achieving financial stability; investing in the SsangYong brand; building human resources; strengthening the product pipeline; and harnessing synergies between the two companies. On product development alone, Mahindra pledged to spend 200 billion won, a 70% increase on the year before. Indeed, the Tivoli which is credited with helping recent sales was engineered together with Mahindra. It is billed as “the basis for SssangYong’s future”.

The company traces its origins to 1954, when Ha Dong-Hwan Motor Workshop manufactured trucks, buses and special-purpose vehicles, but by 1986 the SsangYong name had emerged and in 1988 the business pioneered Korean-made SUVs with the launch of its Korando family. SsangYong’s product range has continued to develop in this direction and, with the exception of the Chairman sedan, the current line-up is packed with utility vehicles. It is the latest incarnation which has seen most success; in the Tivoli’s first year, 64,781 units were made and 63,393 were sold, and in June 2016 production exceeded 100,000 units, just 17 months after launch. This was faster than any other SsangYong model, with the Rexton taking 26 months (September 2003) and the Korando 29 months (January 2013). Mahindra is now hoping to achieve similar success in India with a compact SUV that is based on the Tivoli and soon to be introduced to market.

The Tivoli, Korando and XLV bodyshop is fully automated

High automation, low throughputIndian-owned it might be, but SsangYong’s vehicle factory at Pyeongtaek, Gyeonggi Province, boasts a level of automation which is typical of Korean (and Japanese) vehicle-makers, as AMS can confirm after visiting in June. In the bodyshop which makes the Tivoli, Korando and XLV, the manufacturing processes are 100% automated, with personnel relegated to parts loading and quality checks; there are just 40 people per shift, of which there are two per day. The Y400 SUV and the Rodius MPV are made in a second facility, while the Actyron Sports pick-up and the Chairman sedan are allocated to a third building. There are also three paintshops and three assembly halls onsite. Overall, the plant employs around 5,000 people.

The bodyshop seen by AMS was built in 1987 for Korando vehicles. Subsequent launches included the Mercedes-based Musso in 1993; the Korando 2 in 1996 and the seven-seat Musso in 1999, but according to bodyshop manager Mr Kim (see interview below), the major changes to the operation came in 2010 with the third-generation Korando, SsangYong’s first car with a monocoque construction and in-house engine, the latter made at Changwon Plant. This was the point at which the automation level jumped from less than 30% to 100%. Most of the robots have been supplied by Nachi of Japan, and in order to maximize use of space some of them sit above the line, reaching down to work on the car bodies.

Dating from the same era is the assembly hall for these three SUVs, which has about 500 workers operating two shifts. In this facility there are some interesting technological applications which Mahindra has been keen to bring to its plants back home, as explained to AMS by Hyeong-Duck Seo, manager of the assembly engineering team. One is an electrical front-end loading machine which moves modules from a side track to the main conveyor and another is an air-powered system for the installation of instrument panels. Indeed, during AMS’ visit, some Mahindra personnel were touring the line; clearly this is a very hands-on relationship.

Pushing for more productionFor all the technology on offer, these body and assembly facilities are only making about 30 vehicles per day, in line with current demand. The 250,000-unit factory turned out just 150,000 cars in 2016. When AMS spoke to SsangYong’s CEO, Johng-sik Choi, in October 2016, he said he expected it to reach full capacity within three years, but for that to happen SsangYong will need to see not only continued progress in the domestic market but a resurgence in exports. 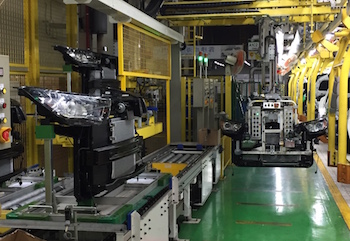 The record domestic sales this year were tarnished a little by an accompanying 51.1% drop in exports to 2,162 units, representing a decline of 29.3% over the course of the half year, which the company blamed on the “sluggish global economy”. This poor export performance left total sales down 10.4% for June year-on-year, and down 5.7% for H1.

Last year, Choi mentioned targeting western Europe for exports in order to take advantage of free trade, but recent announcements have highlighted other tactics for boosting sales abroad. In late 2016, SsangYong signed a letter of intent with Shaanxi Automobile Group to establish a completely built-up (CBU) plant in Xi’an, Shaanxi Province, China. If it comes to fruition, the vehicle and engine facility will become the company’s first overseas production site, turning out existing SsangYong models and those which are under development. Just four months later, SsangYong signed a product licensing agreement with Saudi National Automobiles Manufacturing for 25,000 Q200 pick-up trucks per year at a CBU factory in Jubail Industrial City, starting in 2020.

Choi, for one, seems to be feeling reasonably optimistic. “Last year, the company was able to recover its market share thanks to the Tivoli and escape from the loss-making situation by posting profits for the first time in nine years,” he said in February, announcing the 2016 turnaround. This year, Choi added, the company will “expand our product line-up to further increase our sales and continue the profitable trend”.

How many vehicles were produced last year at this bodyshop?In total last year [SsangYong] produced 160,000 units and this line produced about 140,000 units, so the majority, because it produces B and C-segment SUVs – volume models.

This facility was built in 1988. When did the 100% automation level come in?In 2010 for the new Korando launch we built a full automatic system. Previously only about 20-30% of the work was automatic. By operating automatically, the work efficiency is higher than before, so we can produce more units. The second benefit is that the workload for the employees has been reduced. The third benefit is safety; people can avoid risks in the workplace.

But presumably some people lost their jobs?After that [upgrade] the remaining people who didn’t have a specific job were allocated to different departments like quality control and the assembly line. No one was fired, only allocated to a different place.

Were any changes made to the bodyshop when the Tivoli was introduced in 2015?There was no increase in manpower but the facility was expanded; more robots, more fixtures, more equipment. Our team was very happy about the success of the Tivoli launch.

Can you describe how the monocoque is made?As you know, there are two types of vehicle: monocoque and body-on-frame. In this shop, we produce only monocoque-type cars. We make the engine compartment, front floor and rear floor. The modules on the blue pallets come from the supplier. So simply, the frame – we call it the members – is joined to the floor part. We combine the frame and the compartment, and assemble three modules on the body line. It’s more complicated than a frame.

Did the acquisition of SsangYong by Mahindra affect this manufacturing operation?There were no big changes in the facility after the acquisition; what we are doing is developing our vehicles independently from Mahindra. We are cooperating with them but we can produce our products by ourselves.

What does the cooperation involve?We have already developed the S201, a project which is based on the Tivoli and will be launched in India. We cooperate from an engineering viewpoint.

What are your main objectives now?We would like to sell and export more Tivoli. We are a small company, like a baby in the automotive manufacturing industry, but the Tivoli is doing well and we are quite dominant in this segment domestically, so we are very proud of our performance and we will keep looking to proceed.