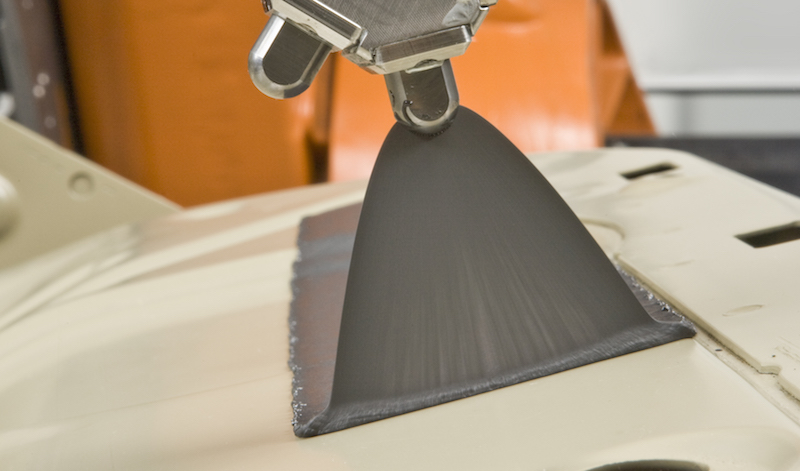 Wind whistle and engine sounds work against the quiet enjoyment that OEMs seek to provide for drivers and passengers. Noise-Vibration-Harshness (NVH) materials placed onto the vehicle BIW structures help to keep much of the unwelcome noise out of the cabin. For many years, the most common NVH material was bitumen melt sheets, cut to shape bespoke to the model and manually fitted.

At a time when every OEM is striving to discover lighter solutions with smaller carbon footprints in vehicle production, use of bitumen is under review.

There is no room, however, for compromise on acoustic performance targets and a solution that more OEMs are investigating is the one-time niche alternative of sprayable, liquid-applied sound deadening (LASD). Advances in material technology have addressed drawbacks on weight, durability and acoustic performance of LASD. Previously sceptical automotive manufacturers are now rethinking their stance.

Early generationsAutomotive manufacturers began introducing LASD materials in the early 1990s, as an alternative to the bitumen mats. However, the take up was slow. Advantages brought about by the faster application process were offset by various issues: applying the material at a thickness that would match the acoustic performance of bitumen mats meant a deeper, and thus heavier, layer of LASD was needed. The material was also vulnerable to cracking during paintshop oven processes.

The challenge therefore was to find a system and material that overcame all of the drawbacks of the early generations and allow OEMs to finally take full advantage of automated application. Henkel is one of the companies pioneering LASD and sees its joint project by BMW as a turning point in the industry’s approach to sound deadening.

Automated applicationThorsten Kraft, head of Henkel’s global project on LASD, explains that BMW were one the last OEMs to take up LASD, still to be convinced that the method would fulfil the very highest requirements for acoustic efficiency. Now, BMW is switching over its coming 3 Series models to LASD as part of a joint project with Henkel providing its Teroson LASD material and ABB supplying the robot technology. Kraft expects the market for LASD to both grow considerably and to become more competitive. “Today, around 26% of global car production has switched to LASD,” says Kraft.

The success of the innovative LASD technology, Kraft believes, is due primarily to the process reliability and application accuracy achievable with spray compounds compared to classic piecemeal bituminous matting. Maximising acoustic performance potential is a prime aim but the lower weight contributes to reducing fuel consumption and, by extension, CO2 emissions. There are clear benefits for the product but there are also advantages for the process. Kraft says, “LASD means a fully automated application and potentially reduces the process cycle time by 50%. I do not know of any OEM at the moment that runs a specific quality control immediately afterwards to check that the LASD application is correct as the process is very robust and very stable.”

With automation, naturally, comes flexibility in regard to line changes. Kraft explains: “Currently on one car body there can be up to 40 bitumen mats of varying shapes. On average, you need four to five people on the car body line applying the mats manually.”

Furthermore, when introducing a new model to the line, a new acoustic package with new cuts of mat required along with the implications for tooling and lead times to consider. An automated system is revised and updated in a much shorter period of time. Typically, reprogramming may only take an hour. Besides the time disadvantages, bitumen mats also have a volatile organic compounds (VOC) content that OEMs would not be encouraged by. They also create dust levels that make them unwelcome in any paintshop.

The most sustainable solutions are those using the new renewable thermoset LASDs, which are suitable both for typical bodyshop applications and for use in the paintshop. “The new and advanced LASDs are free of phthalate plasticisers, they are free of solvents and they fulfil OEM requirements with respect to VOCs and fogging emissions as per the industry controls,” Sauer explains.

In the bodyshop, LASD is applied to steel with a typically oily, unpainted surface. In this setting, a rubber or renewable thermoset material with a strong wash-off resistance is used. The waterborne acrylic is not suitable for unpainted surfaces for corrosion reasons, obviously. As well as placement on interior sections of the BIW, the rubber or renewable thermoset solution can be on outside areas such as wheel arches. A heated application is used, at 50-60°, and delivered by extrusion nozzle.

In the paintshop, rubber, renewable thermoset or waterborne acrylics are applied with a regular stainless steel nozzle (400 microns) in flat streams. Three identical nozzles are placed at differing angles, avoiding drastic readjustment of the robot movements. The material is pumped at room temperature. 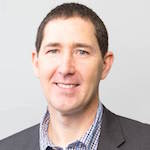 "You need up to five people on the line to apply bitumen mats manually... LASD means a fully automated application" - Thorsten Kraft, Henkel

A typical cycle time of about 72 seconds is easily achievable as two robots apply around 5.5kg of LASD material. Even with a soft alloy nozzle, the material is kind to the equipment, showing only low abrasion levels. Porosity, cracks and blistering are absent, a clear improvement from the early days of LASD and, crucially, the material provides a constant layer thickness. 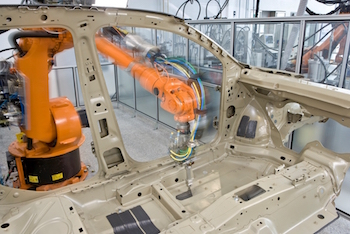 “We need full understanding of the customer process,” says Kraft, “What is important is to guarantee accuracy of the application. For example, there are strict limits on the thickness in readiness for fitting cables and carpets and all of the interior. If we increased the depth of our material by just 0.2mm the carpet will not fit. In general, we achieve a thickness of 3mm – not more, not less.”

BMW breakthroughThe join project between BMW, Henkel and ABB was implemented at the Henkel Adhesives LASD Competence Centre in Heidelberg, Germany, to ascertain the suitability of Teroson AL 7155, a water-based acrylic sound deadener, for the new 3 Series. Having been successfully validated, the basic functionality of the application is now being taken through to series production at a BMW pilot line in Munich. The key attraction for the OEM as the considerable reduction in weight (more than 20% compared with bitumen melt sheets) alongside similar acoustic performance. Furthermore, fact that the process was readily implementable while also being highly stable was deemed by BMW to be an enormous advantage when it comes to upscaling for full industrial production.

“Right from the start, the open and transparent mode of collaboration within the team also proved to be enormously valuable,” Kraft says. “This enabled us to satisfy many of the high requirements placed on the technology early on in the project. We intend to continue this beneficial alliance in the hope that the success of this LASD application can be transferred to further vehicle models.”

With the advantages offered in terms of process and performance, and now the endorsement of BMW, the message from the proponents of LASD is louder than ever.