As FCA US smoothly implements a $744m upgrade at its Windsor plant in Canada, AMS focuses on the new equipment in the paintshop, including innovative oil separation technology and a robotic sealing system 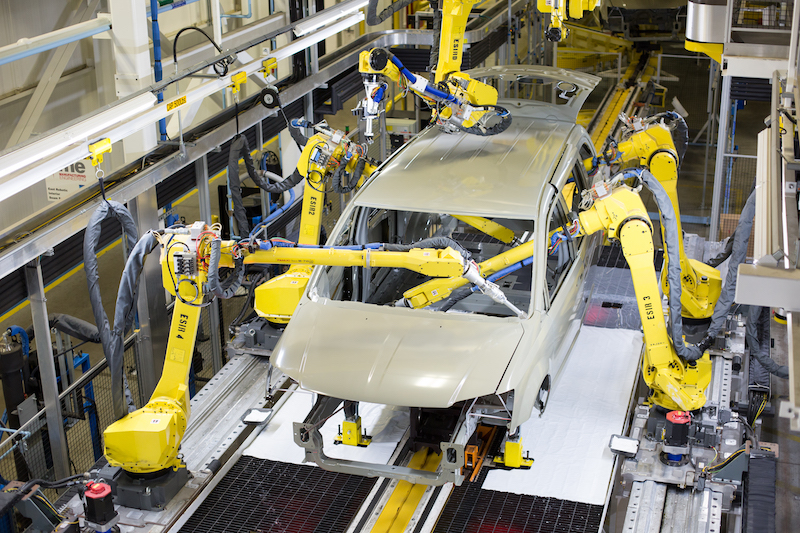 “What we were asking the Windsor team to do had never been done before,” said Brian Harlow, vice president – Manufacturing, Fiat Chrysler Automobiles (FCA) North America. “They were truly pioneers.” Harlow was speaking in May, shortly after the production launch of the 2017 Chrysler Pacifica at Windsor Assembly Plant in Ontario, Canada. FCA US has spent $744m on adapting the 88-year-old factory to make the sixth-generation model (plus a hybrid) alongside the Dodge Grand Caravan already in production; different minivan architectures with no shared parts. The reorganisation also saw Windsor end production of the Ram Cargo Van and the Chrysler Town & Country minivan, in early 2015 and March 2016 respectively. In addition, the plant has hired 1,200 extra workers in permanent positions, bringing the total employment to 6,000 on three shifts (including 141 direct employees per shift in the paintshop).

Major construction projects took place during the two-week Christmas break at the end of 2014 and for 14 weeks in the first half of 2015, with work continuing throughout the year to modify the existing facilities to handle new process loading as well as to make space for advanced technologies, improved conveyance and robotic assist equipment. There were two key objectives following the 16 weeks of down time: to return to a daily output of 1,490 units for the Grand Caravan within seven weeks and to pilot the new Pacifica on the line within two weeks, while maintaining the quality of the existing minivan. This would be difficult but “we knew that with World Class Manufacturing [WCM] tools guiding them, the Windsor team would rise to the challenge”, according to Harlow.

“WCM has been a very significant part that touched on almost every aspect of the Pacifica launch,” agreed Michael Brieda, plant manager at Windsor. “It drives us to set the plant up the best way we know how, using what we have learned since its implementation into the company beginning in 2009. It’s our enabler to achieve the highest vehicle quality and build the best vehicle possible for our customers.” Windsor achieved Silver WCM status in March 2014.

According to FCA US, the upgrade at Windsor has involved a number of ‘firsts’: the first use in a North American bodyshop of a PULSE (propulsion using linear synchronous motor energy) transfer system; the first dual-arm laser radar measuring system worldwide, in the Component Center; and the first FCA North American application of a special oil separator system in the paintshop. Overall, the majority of the work took place in the bodyshop and assembly hall (see box below), but the paintshop too received an upgrade in order to improve the quality of the finished Chrysler Pacifica, though FCA US will not say how much of the total investment was spent here.

Adding sealant, removing oilIn the paintshop, a new robotic sealing system was installed with the assistance of Encore Automation, a supplier of automated manufacturing systems with special expertise in paint operations. The system uses 38 Fanuc robots; six to open the liftgate and bonnet, and 32 to apply 272 feet of sealant to the underbody, engine compartment, interior and roof ditch. The sealing of the underbody was added to the Pacifica paint process in order to provide extra corrosion protection and to meet the OEM’s global standard. The newly installed sealant application lines have also been programmed to handle the existing minivan. A further addition was the high-speed, friction-drive transfer system, provided by the Central Conveyance Company, which boosts efficiency by carrying a greater number of vehicle bodies through the sealant cell.

Throughout the paintshop, a combination of skids and carriers are used to convey the bodies. FCA US purchased some new units to handle the two minivan architectures but modified others; in total, almost 2,300 carriers were redesigned.

The increased amount of sealant being applied, including to the underbody, required the installation of a new sealant gel oven, provided by Dürr. A spokesperson for FCA US confirms that this oven was fitted into the existing space without need for expansion; throughout the upgrade, the 469,520 sq.ft footprint of the paintshop has remained the same, as has the capacity. Each Pacifica now spends ten minutes in the oven, which hardens the sealant to prevent it from dripping into the primer powder during the next step of the paint process.

The new oil separator, developed by Suparator Systems Europe, is an example of post-merger technology transfer from Fiat, which uses the system in its European operations. The separator has been incorporated into the pretreatment process to prevent the contamination of successive vehicle bodies and enhance overall paint quality; the oil used to protect the sheet metal during shipping needs to be eliminated prior to e-coating. According to the FCA US spokesperson, it works by using hydrofoils comparable to aircraft wings, with the oil drawn to the surface through the differential velocities in the fluid flows. The bodies are dipped into a bath and the separator removes the oil, keeping the bath and therefore the bodies as clean as possible for the next stage of the paint process.

A final change in the paintshop was the reprogramming of 135 Fanuc robots in the primer and topcoat stages, which was performed by Inovision Software Solutions. The Grand Caravan and the Pacifica spend the same length of time in the paintshop – 10.4 hours – before progressing to assembly.

FCA US upgraded all stages of production at Windsor ahead of the 2017 Chrysler Pacifica launch. Most of the changes at the 4.4m sq.ft plant consisted of upgrades to the equipment and processes, though there were also small additions to the footprint in the area of quality control. In the bodyshop, more than 80% of the equipment was overhauled.

New technology in the bodyshop:– 822 new robots– 19 new lines– five lines retooled– 1.3 miles of conveyors upgraded– PULSE (propulsion using linear synchronous motor energy) transfer system, integrated into the line where the inner and outer body side panels are married. The technology uses thrust rather than torque to move body sections through robotic workstations, increasing the speed as well as reducing maintenance and downtime; it is capable of handling up to four architectures– resistance spot-welding guns for the aluminium door of the Pacifica– 32,000 sq.ft Component Center with the latest equipment to identify sources of build variation and resolve any fit and finish issues– laser radar, non-contact dimensional measurement system, which reduces measurement time per vehicle from 2.5 or three hours to one, enabling 15 rather than six vehicles to be processed per day.

Additions in assembly:– all workstations modified to handle both architectures, as was the material flow from the loading dock to the line– a new skillet system running through 74 stations, 46 of which are used for production, allowing height adjustment of the vehicle on the conveyor depending on which interior trim component is being installed, thus improving ergonomics and quality; the skillet system also transports kits on dollies, minimising lineside inventory and part picking errors as well as facilitating ‘golden zone’ delivery– a new, 200ft overhead conveyor system to return the body carriers to the beginning of the line– automated windscreen installation– robotised storage tub placement– several hundred direct current tools upgraded– suspension decking area modified to handle three models– several stations and ergonomic arms added for hybrid production.

Other installations:FCA US also added a quality assurance centre, which tests parts received from suppliers; a complete technical vehicle validation facility (CTVV), performing customer-focused audits; and a materials laboratory to support the CTVV in identifying and troubleshooting emerging issues onsite.