Not too posh to push 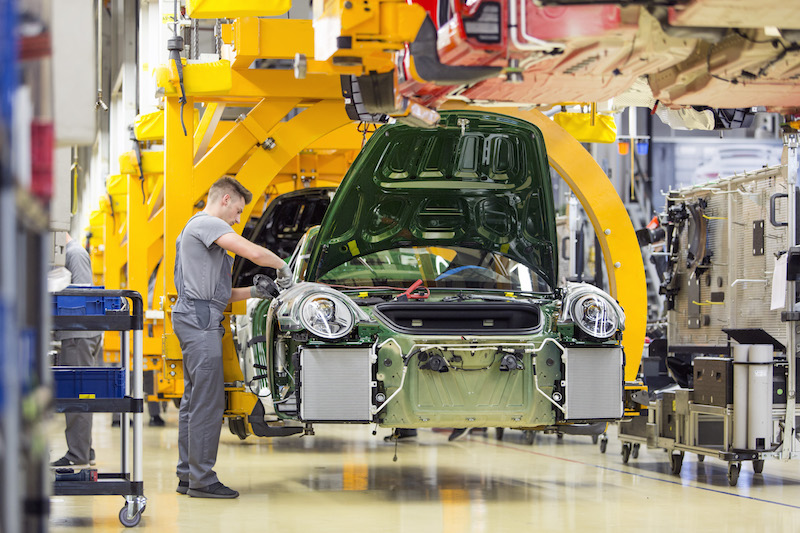 Both an iconic name in the automotive industry and a core part of the Volkswagen Group, Porsche has been facilitating its rising production in recent years by relying heavily on Group resources while also trying to maintain an independent identity. The diesel saga has shown how tricky is the path it has been treading, but without assistance from VW plants it is doubtful that Porsche would have been able to achieve the production volumes and financial results it has managed of late.

Although best known for its 911 sports car, Porsche has added more sports cars, SUVs and a tourer-sedan, and is currently producing around 200,000 vehicles a year, heading towards 250,000. It has been suggested that, at such a level, a smaller SUV than the Macan and a sports car below the Boxster/Cayman might be introduced, but Porsche has dismissed such ideas. However, new models are certainly going to take production volumes even higher, possibly towards 300,000 units a year – not so long after the company was producing barely a tenth of this volume, when all it made was the 911. In support of this expanding production, Porsche’s workforce is also growing, with the number of personnel up by 12% to exceed 29,000 in 2017.

• Last year, Porsche achieved record sales of nearly 238,000 and turnover of €22.3 billion• Diversifying its model line up beyond the 911 has lifted Porsche’s annual production to around 200,000 vehicles• In the past year, Porsche’s workforce has grown by 12% to exceed 29,000; for Mission E alone, 1,200 jobs are being created• After a long history of petrol power, Porsche added a diesel engine to the Cayenne in 2012. But the brand may turn away from diesels after the VW Group’s emissions scandal

Diversifying the model line-upPorsche’s model range consists of its three “volume” sports cars (the 911, Boxster and Cayman), two SUVs (the Cayenne and Macan), a four-door tourer (the Panamera) and, although there are none in production at the moment, an occasional series of short-lived, low-volume supercars, most of which are handbuilt. The last such example was the Porsche 918 Spyder, of which just 918 were built over a period of 21 months until mid-2015.

The 911, which comes in a myriad of formats – RWD, 4WD, cabrio and hard-top – is to be replaced in early 2018 with a car that will be the first to use the VW Group’s new rear-wheel mid-engine architecture. As well as forming the basis for the next Boxster and Cayman, this platform is expected to be used on future Lamborghinis and the Audi R8, which is to be replaced in 2023.

The current Boxster and Cayman date back to 2012, although they have been known as the 718 Boxster and 718 Cayman since 2015, when they both received facelifts and the new H4 engine. They are due to be replaced in 2019 with the new versions based on the next 911.

The Panamera was the first vehicle to use the MSB RWD/AWD architecture that is also used on the larger Audis, ie the A6/A7/A8. Launched as a four-door luxury sedan, an estate version has been added this year, having been unveiled at the 2017 Geneva Motor Show. Porsche engineers led the development of the MSB platform, which uses aluminium on most of the body panels. Due to capacity constraints at its Zuffenhausen plant in Germany, Porsche has the Panamera bodies welded at VW Hanover and then shipped to its main factory for assembly.

A new generationPorsche’s first SUV was the Cayenne, originally introduced in 2002. Cayenne bodies are produced at the VW plant at Bratislava in Slovakia; the powertrain is also added there before the unfinished cars are shipped to Leipzig for final assembly and trimming. This enables Porsche to classify it as a German-built car. However, for the third-generation Cayenne, full assembly will take place in Slovakia on the same line as the Volkswagen Touareg and Audi Q7. As with the current model, the new version will use the same platform as the Audi Q7, Volkswagen Touareg, Bentley Bentayga and the new Lamborghini Urus SUV. Given the increasing trend for SUVs to be offered in coupé style, a coupé Cayenne could be offered with the next model.

Although the Cayenne and Panamera still have diesel options, this option is not likely to be offered on any all-new versions in future

The Macan, launched in late 2013, was responsible for a major expansion of the Leipzig plant, which was originally set up for final assembly of the Cayenne (see box). The Macan programme was expected to make 50,000 vehicles a year but production is running at a much higher rate now; nearly 86,000 were made in 2015 and over 96,000 in 2017, making it Porsche’s biggest-selling model, ahead of the Cayenne. A new Macan is due in 2020 and this is also expected to be made on the MSB platform, moving on from the PQ35 basis of the existing model.

Porsche is now finalising the development of its first all-electric car, based on the Mission E concept car that was shown at the 2015 Frankfurt Motor Show, and has added 1,200 positions to its growing workforce for this model alone. Mission E will be Porsche’s competitor to the Tesla Model S and is expected to be on sale by 2020. The car uses the new J1 platform, a version of which (called C-BEV) will be used for Audi’s e-tron quattro SUV. Central to the design of the Mission E will be a rapid charging system, designed by Hitachi, which will achieve an 80% charge within 15 minutes. As well as being all-electric, Mission E will have Level 4 autonomous technology.

Steering clear of diesels – againHaving offered solely petrol-powered vehicles for most of its history, Porsche added diesels to the Cayenne in September 2012. Since then, it has added diesels to the Macan and Panamera but has not done so to its sports car range. Given the multiple problems of diesels in the VW Group, it would not be surprising to see them being dropped from the Porsche range in the near future.

Porsche is reportedly seeking a €200m payment from its sister company, Audi, for the cost it has incurred following the diesel crisis. This follows on from Audi admitting back in November 2015 that its V6 diesel engines had used an auxiliary device to manipulate emissions readings. Porsche buys these engines on an OEM basis and is not involved directly in their development. As well as problems in the US because of the Audi-supplied diesels, the German government ordered a recall of the Cayenne and prohibited the continued sale of the diesel model. As a result, Porsche wants Audi to pay for its retrofitting work, legal costs and other customer support measures. Audi has refused to comment officially.

In a clear sign that Porsche feels wounded by the diesel saga, in July 2017, CEO Oliver Blume told the press that the OEM was considering the option of dropping diesels when the current models are due to be replaced. With sales of hybrids rising and new electric vehicles (EVs) on the horizon, diesels are probably on borrowed time at Porsche, although the recently revised Cayenne and Panamera still have diesel options. It is almost certainly too late to drop them now, but it would be surprising if the all-new versions of these models were to have a diesel option.

Diesels accounted for 15.5% of Porsche’s 2016 production, but with no diesels on the 911, the Cayenne and Macan had higher diesel ratios of 25% and 18% respectively; just under 10% of Panameras were diesel-powered.

Porsche is slowly turning to hybrids and full EVs. Hybrids are offered for the Cayenne and Panamera, but a more significant move came in December 2015, when Porsche confirmed that it was developing an electric car: Mission E. In addition, as part of the move to EVs, Porsche is a member of a consortium with Ford, Daimler and BMW plus other members of the VW Group, to develop an ultra-fast, high-power charging system for major motorways in Europe. 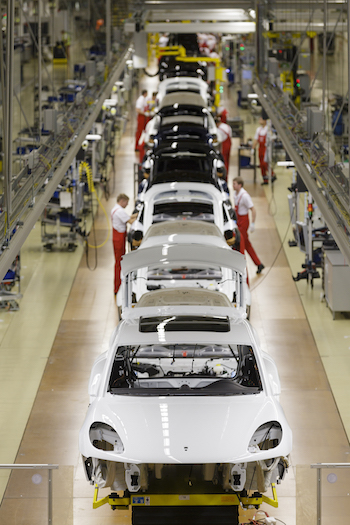 Originally built to make the Cayenne, a further investment of more than 500m euros saw the Leipzig plant extended by 30% for Macan production

Porsche has two plants of its own – Zuffenhausen and Leipzig – in Germany, but also uses VW plants at Hanover and Osnabrück, plus the Bratislava plant in Slovakia.

Stuttgart-Zuffenhausen, GermanyThe 911 and the Boxster/Cayman are assembled at Porsche’s home location, along with all Porsche petrol engines; the diesels used in the Macan and Cayenne come from Audi Gyor in Hungary. Capacity constraints at Zuffenhausen mean that some Cayenne-specific components and sub-assemblies are produced at the VW plant in Osnabrück. In future, the upcoming Mission E electric car, slightly smaller than the Panamera, will also be built at Zuffenhausen, which will receive €700m for a new paintshop and assembly line, plus facilities for the assembly of electric motors.

Following an investment of €80m, a new engine plant opened at Stuttgart in July 2016 for the production of V8 engines, with capacity to make 200 units a day. The first vehicle to use the new engine was the Panamera. At the heart of the new engine plant is a flexible production system featuring extensive manual assembly, but workstations along the U-shaped, 412-metre assembly line are served by a series of electric transporters that move autonomously around the factory, powered by lithium-titanate batteries and guided by 16,000 magnets in the floor. Assembly of a new engine starts every 3.5 minutes; each unit then passes through 110 stations, requiring 6.2 hours to be completed.

Leipzig, GermanyThis plant was built for final assembly of the Cayenne but has been expanded significantly in recent years. More than €500m were invested for the Macan, expanding the factory’s footprint by around 30% with the addition of a new bodyshop and paintshop; this was on top of the €250m spent on the Panamera and Cayenne assembly lines. All three models are assembled on the same line, and this limitation coupled with rising demand for the Macan is why the next Cayenne will be fully assembled in Bratislava.

Bratislava, SlovakiaFull assembly of the new Cayenne has been switched to this VW Group plant in Slovakia in order to free up capacity at Leipzig to make more Macans and other, unnamed forthcoming models. Initial production of the new Cayenne started in August 2017 and the full market launch is due in 2018. In Bratislava, more than €800m have been invested in new facilities and manufacturing technologies, although this will cover the production of the other SUVs noted above as well. The Bratislava plant has taken on 1,900 new workers since the beginning of 2017 for this expanded product range, with plans to recruit another 1,000 by the end of the year.

ToolmakingTo enhance its engineering resources and handcraft skills in vehicle assembly, in 2015 Porsche bought the toolmaking division of robotics company Kuka at a price which could reach €25m. This added 600 employees. The expertise of the former Kuka unit in aluminium parts assembly and design was a key reason behind the acquisition.