AMS gives an update on the OEM's recently opened plant at Salamanca, Mexico – its first in North America 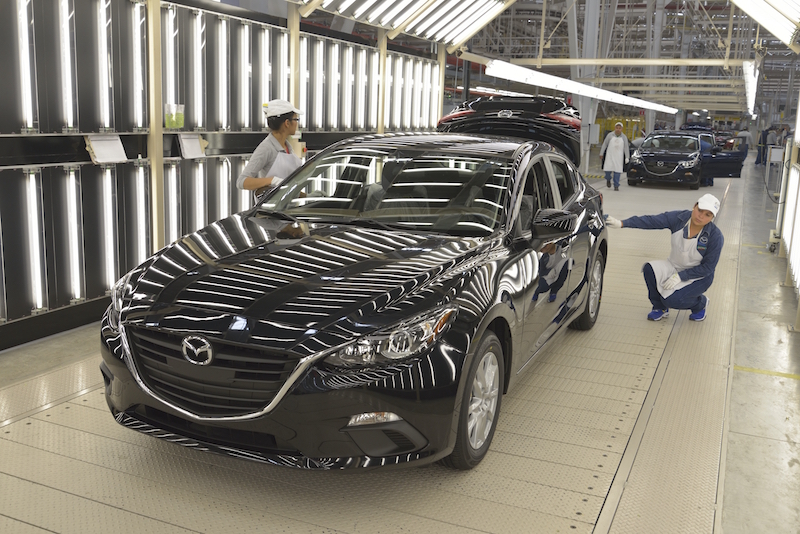 In January 2014, Mazda joined the flood of vehicle-makers arriving in Mexico by opening a new plant in Salamanca, Guanajuato – its first independent production site in North America. The idea behind this move was not only to bring production closer to the lucrative US market but to rebalance the OEM’s manufacturing footprint, which leaned so strongly toward the east that Mazda had only two other non-Asian factories, in southern Africa. At full capacity of 250,000 units per year, the Salamanca plant would be able to lift the OEM’s overseas production from 30% to more like 50% of the total.

The Salamanca plant is so far the only manufacturing facility of Mazda de México Vehicle Operation (MMVO), a 70:30 joint venture between Mazda and Sumitomo which was established in 2011. On 2.56m sq.m of land, MMVO has built a stamping facility, bodyshop, paintshop, assembly hall and engine machining shop, plus an adjoining supplier park of companies which are producing seats, plastic components such as bumpers and instruments panels, and non-body sheet-metal parts. By the start of production, Mazda had acquired 111 suppliers in Mexico, including many within the state which were already serving other OEMs, such as GM at León. The level of local content is around 50%, with most other components coming from Japan. Mazda plans to raise this to 62.5%, therefore exceeding the legal minimum of 60% within five years of the start of mass production.

Although a growing automotive hub, Guanajuato has historically focused on agriculture and is far from being a fully industrialised region. Therefore, it provided Mazda with a plentiful workforce of young and eager employees – but one which needed training from scratch. Speaking to AMS last year, Keishi Egawa, then president and CEO of MMVO, said this was “the biggest challenge” Mazda faced in establishing its new factory (Egawa has now returned to Japan, replaced by Chiharu Mizutani in April this year). In the first stage of workforce development, 180 MMVO engineers and production workers were sent for six months of training at the Ujina and Hofu plants in Japan, so they could transfer this knowledge to their colleagues upon their return. By the time ramp-up was completed in March 2016, the workforce numbered 5,200 individuals.

The press shop achieves a sheet-metal usage of 60%

March saw a capacity increase from 140,000 to 230,000 units per year through an investment of $150m on top of the initial outlay of $500m. A further $120m had gone towards the addition of an engine machining facility that started operations in October 2014. Salamanca began turning out Mazda3 sedans and hatchbacks in January 2014 and introduced the Mazda2 hatchback in October that year. As the plant was designed to produce both these models, Mazda2 production simply required the addition of specific dies and jigs, plus a sub-welding line and sub-assembly line.

In December 2014, Mazda Salamanca reached the 100,000-unit production milestone, less than one year after launch. For most of 2015, it was producing about 1,000 cars per day. Since June last year, Salamanca has also been making the Toyota Yaris R, which is similar in build to the Mazda models. Toyota is constructing its own factory in Guanajuato to make the Corolla, but neither OEM has said whether the current arrangement will cease when this factory opens in 2019.

Mixing high technology with manual labourIn terms of its structure, Salamanca was modelled on the factory at Mazda’s Hiroshima headquarters, while its equipment most closely resembles that of the OEM’s second-newest plant, at Nanjing in China. In some ways, it is technologically impressive. The IHI presses in the stamping shop can achieve a sheet-metal usage of 60% – around ten points more than in Mazda’s Japanese plants. Multi-press technology also enables the simultaneous production of several body panels.

However, in the bodyshop, the operation is less sophisticated; with only 140 Fanuc robots, the automation level is just 50%, compared with almost 100% in Japan. This is low even by Mexican standards; for example, at Volkswagen Group plants in the country, the level is 80%. According to Egawa, this was a deliberate decision to enable more flexibility in production and to capitalise on the advantages afforded by the local workforce.

In the 74,000 sq.m assembly hall, the two Mazda models and one Toyota vehicle come down the same line in a mixed sequence, arriving from the paintshop by overhead conveyor. An adjacent shop provides the engines so that the factory does not have to rely on importing these components from Japan. In this shop, a high-precision machining line supplies cylinder blocks and heads to an assembly line. In the main assembly hall, there are 134 workstations and 22 quality gates to check the fit of the components.

Assembly is made more efficient by the use of kitting via lineside trolleys plus boxes which travel with each vehicle. Ergonomic measures include lifting devices and ‘fixers’ to raise the car bodies on the conveyor and so accommodate the relatively small height of the average Mexican employee. The employees wear coloured baseball caps as a visual management aid; blue for an operator, yellow for a supervisor and orange for an assistant foreman. The workforce has been instructed in MMVO’s ‘100 minus one’ philosophy, in which 100 minus one is not regarded as 99 but zero, because although one fault out of 100 is a small proportion of the total, one faulty product means everything to the customer who experiences it.

Salamanca’s output departs the factory by trailer or the nearby railway, with only a small propotion serving the local market (14% in 2015). Most exports go to the US and Canada (49%), Europe (39%), and Central and South America (12%). It is the larger Mazda3 rather than the Mazda2 which is exported to North American countries.