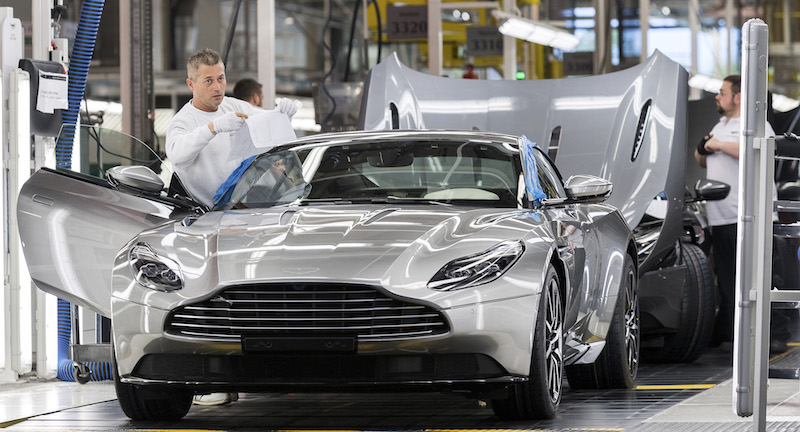 A proud claim of Aston Martin is that of all the cars the company has ever built in its 105 year history, 95% of them are still on the road. As a premium and performance brand that prides itself on timeless craftsmanship, the company holds fast to the ‘made to last’ maxim, it’s integral to the luxury sector. There again, it’s fairly safe to assume that anyone who has ever owned an Aston Martin model is highly unlikely to choose to scrap it.

However illustrious its past, Aston Martin’s current custodians have eyes firmly fixed on the future. In an effort to end the boom-bust character of its recent existence, the company launched a business transformation strategy in 2015, the Second Century Plan, and sights were set on doubling production capacity by 2019, while also cutting manufacturing costs.

The first step was the launch of the DB11, built on a new aluminium platform. Then, earlier this year, Aston Martin commenced production of the next generation Vantage, optimistic that it will match and surpass the success of the outgoing model. Hand-built at the Gaydon production plant and headquarters in Warwickshire, central England, the new Vantage takes its place alongside the Rapide S, the DB11, and a new GT coupé also launched this year, the DBS Superleggera. The new arrivals are among the range of seven new models to be launched over a period of seven years, all to fulfil the intentions of the Second Century Plan.

Outlining the company’s intentions, Andrew Haslam, Aston Martin’s vehicle line director large car platform, says: “We’ve embarked on a major set of commitments. We will replace every single car in our range and expand from four to at least seven different models. We’ll launch on average a new model every nine months.”

How does a luxury car manufacturer that has only ever built and sold 85,000 cars in its entire history find its place in an industry undergoing such swirling change? The common ground, Haslam says, is technology: “We are in the fortunate position in that, while our numbers are small, the cars we build are extremely advanced. Because of this, we have an understanding of emerging technologies, more advanced materials and processes within our sector.”

At Gaydon, of the current 650 staff working in manufacturing, 250 are in trim and final assembly, 260 in the bodyshop and paintshop. Another 140 are in ‘off-track’ areas for special vehicles.

Since the beginning of 2018, the plant has moved up to two shifts to incorporate the new Vantage, increasing production capacity to 9,000. For the moment, output is around 18 cars a day – 90 cars a week.

An Aston Martin model, the company says, would generally take about 200 man-hours to put together – from start to finish, driven out of the door. Of that, 70 man-hours are taken on trim. The real leather used is sourced from the north of Scotland, bred in an environment without barbed-wire fences or biting insects – bulls only, no cows and thus no stretch marks. The full thickness of the hide is used, pressure-injection dyed to present the surface colour through all of the fabric – so any scrapes left from jean-rivets, or any other passenger mishap, are never as glaring.

The car bodies are painted on site and whereas 70 man-hours are spent on trim, 50 man-hours are spent on paint alone, depending on the complexity of the finish. For example, satin finishes are available as a buyer option but are very labour intensive. No-cost paints are higher volume, such as magnetic silver, and can be robotised to a degree but there’s always hand finishing.

The painted body shell is placed at the beginning of the production line, passing through station processes of about 40 minutes each. At the beginning, brake lines, fuel lines and sound deadening are applied. A few stations in, the wiring harness and any sub-looms, for the boot or under-bonnet, are added. “Like wrestling with an octopus” is how the installation of the wiring loom is described. Before delivery to the line side, the looms are warmed in an oven to leave them more malleable for the assembly workers to fashion, place and feed through the apertures in the body. Once installed, the loom cools down and remains formed to the shape of its placement.

In the past, for vehicles using Aston Martin’s VH platform, bodies were sourced from Hydro, a supplier located in the next county. The new Vantage is based on architecture shared with the DB11, so with the new model lines up and running at Gaydon, all the hot quenched aluminium bodies are now manufactured on site.

Besides riveting, panels are continuously bonded on precise jigs, with glue applied by robot. It’s a Nasa-developed glue, stronger than the metal around it. The glue will outlast the metal, Aston Martin says. By analogy, take the idea of a buttoned shirt. When pulled, the material between the button fixings will move – not so with a zip-fastened garment. Or, say, two sheets of A4 – overlap them, staple them in five places and then pull them apart. They will give along the line between the fixings of the staples, but if you then glue and overlap those pieces of paper, in pulling them apart, the fabric of the paper will break and give way before the bond does.

This concentration on bonding is central to Aston Martin’s need for exceptional torsional rigidity in the body. From the driver’s perspective, a vehicle with high torsional rigidity will give a more solid feel when the car is running. Cabin passengers will experience fewer noises because the car body has less twist and flex when there are forces transmitted from the suspension.

As suspension components and the sub-frames are aluminium, naturally, with aluminium comes lighter bodies. The DBS Superleggera weighs 1,693kg dry. To put that into context, the Volkswagen Golf is around 1,500kg, but bear in mind that the Superleggera’s weight also includes a V12 engine and automatic 8-speed transmission.

In September, Aston Martin announced that its second major UK manufacturing facility will become the brand’s centre for electrification. The plant, in St Athan, Wales, will take on production of the Lagonda brand – what Aston Martin is calling “The world’s first zero-emission luxury marque.”

Production of the Rapide E, its first all-electric production model, spearheading the company’s low- and zero-emission vehicle strategy, will start in 2019. A new range of Lagonda brand vehicles will commence production in 2021. St Athan will also produce another first for Aston Martin – the DBX sports utility vehicle, due to begin next year.

The new plant will bring up to 750 high skilled jobs to south Wales over the coming years, with more than 150 already recruited.

One of the attractions of south Wales was the availability of upholstery skills in the area, thanks to the cluster of home furniture factories previously established there. That said, it was also disclosed last year that Aston Martin Lagonda Ltd. was conditionally offered £5.8m Repayable Business Finance from the Welsh Government. Construction at the St Athan facility is now in the final phase. It is transforming the former UK Ministry of Defence superhangars into a state-of-the-art vehicle assembly facility.