Audi’s links with FAW stretch back more than 25 years to the origins of large-scale car production in China. AMS visited the JV's Changchun plant, Jilin, which has recently added new body and assembly facilities 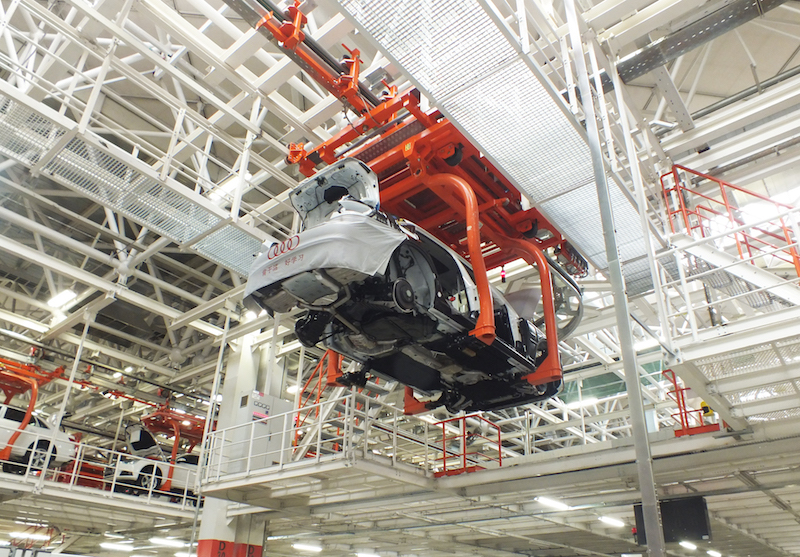 As one of the first large-scale joint ventures established within China’s automotive industry, the partnership between Changchun-based FAW and the Volkswagen Group has now passed the quarter-century mark. Having started off with one product and one brand, FAW-VW now manufactures 12 major product series under the Audi and VW names. The China FAW Group has a comprehensive automotive manufacturing output: passenger cars; light and heavy trucks; coaches and buses; plus engines, transmissions, axles and other components. It has domestic production plants, engineering development and test centres located in 18 sites throughout China, making it one of the Big Four, alongside Changan, SAIC and Dongfeng.

Around one-and-a-half hours by air from Beijing, Changchun is a city of about 8m people and capital of Jilin Province in north-eastern China. The province is part of the heavy-industry belt and shares a border of about 1,200km with North Korea and one of 232km with Russia. Its association with large-scale vehicle production is as old as that of China itself. As the First Automotive Works, the company broke ground for the original Changchun factory in 1953, making use of the city’s post-war industrial base to manufacture trucks and passenger cars. The group now produces more than 2m units per year, including for Hong Qi, China’s oldest brand. The original Hong Qi (or ‘Red Flag’) vehicles were launched during the first wave of FAW production in the 1950s as the country’s first domestically produced passenger cars.

Operations at Changchun are overseen by Volker Germann

Audi’s first links to the area stretch back to 1988 with the beginning of production under licence of the Audi 100. Subsequently, a formal FAW-VW JV was established in 1991; FAW Group Corporation holds a 60% stake, VW AG has 20% and Audi AG takes 10%. The fourth partner, also holding 10%, is the Beijing-based Volkswagen (China) Investment Company, wholly owned by VW AG and created for the venture.

The JV was the first major car manufacturing enterprise to be built in China using economy of scale from the start. Its initial Audi model, the Audi 100, went into production in 1996 (as the Audi 200). A version of the A6, modified for the Chinese market, followed in 2000 once Audi had shipped up-to-date production technology, such as laser welding, to the plant in China.

A broad and growing networkToday, across Changchun, Chengdu in south-west China and Foshan in the south of the country, the JV operates eight specialised production plants. Expansion plans include a mirroring of the plant at Foshan. New production sites will see the plant portfolio expand further: to Tianjin, in the north and close to Beijing, and the eastern city of Qingdao, near Shanghai.

Operations in Changchun are overseen by production director Volker Germann. With experience in Germany and Brazil, Germann has worked for Audi and VW for more than 30 years. His assignment to China came in 2016. “I’ve been based here for one year, more or less, but I’ve known the Changchun plant for a long time and have been here many times over the past 25 years,” he told AMS.

The complex comprises two factories handling both Audi and VW models. A full production route of press shop, bodyshop, paintshop and assembly sees around 870,000 vehicles per year emerge from the Changchun factory. The most recent addition to the site is a new assembly plant for A4, A6 and Q5 models and, as such, features the newest standards available in the VW Group. There are also onsite transmission and engine plants, supplying Changchun itself and the joint ventures’ other locations, Chengdu and Foshan.

There are around 30,000 people working across the whole Changchun site, in the manufacturing areas as well as management and an onsite development centre. The vast majority of the workers across each discipline are local employees. Only 1% of the headcount consists of individuals from Germany or other VW Group sites. “The company’s direction is very much toward the local market – European customers have different preferences to China’s buyers,” Germann adds. It is an approach that has spawned success. From small beginnings, by 2016 total production volumes had reached 1.9m, made up of 1.3m VWs alongside 556,000 Audis. Production has doubled since 2010.

Matching standardsA recent development at the Changchun site is a new A4 bodyshop with the capacity to make 600 bodies per day. The body structure is produced on the upper level with the ground floor tackling the surfaces, pillars and all other components plus the finish and quality stages before conveyance to the adjacent paintshop. 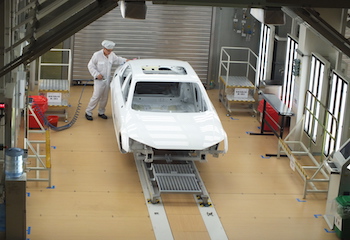 “The cars are built to the same standard as in Europe; the same materials – cold-formed steel, hot-formed steel and aluminium – the same amount of welding points. The only difference is that most materials are sourced locally, so produced here in China or elsewhere in Asia. But the construction and safety aspects are the same,” Germann explains.

While tried-and-tested processes are used in the vehicle manufacture, Germann and his colleagues appreciate that there will be some concessions to the preferences of local consumers. Body styling is a common variation, particularly the wider use of chrome. However, on safety features, there is no discussion: “Chinese customers appreciate our very high safety standards,” asserts Germann.

“We qualify our suppliers and make material tests with our laboratory to ensure it meets quality requirements. At the end of the day, it’s better to source it here and not to transport it across the world.” Depending on the model, 60% to more than 90% of parts are sourced from Chinese or wider Asian suppliers.

Distance is an obvious consideration, but it is easy for outsiders to underestimate the vastness of China. “The distances are interesting for us, from Europe. If we compare the drive from Oslo [Norway] to Lisbon [Portugal], it’s 3,500km — more or less the same from Changchun to Foshan or Hong Kong,” Germann remarks. Being part of a global automotive group, however, communications between Germann’s teams and their counterparts in each of the other Audi and VW sites remains tight and effective. “For example, only a few weeks ago, we received information about an optimisation of robotic equipment from another plant in the group. They shared the details and so we could take action for ourselves,” Germann explains. 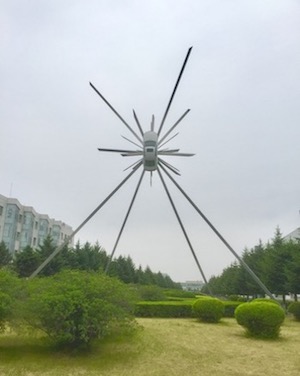 Ode to Audi, the sculpture by Gerry Judah, soars above the Changchun plant's central gardens

A liking for lasersInside the Audi bodyshop, laser welding is prevalent and Germann is a firm advocate of the process. “The laser is not finished. They’ve been used here for 20 years and if you take another look in 20 years from now you’ll still see more lasers – because it’s quicker, and with different materials you can play with the energy in a way you can’t with a welding gun.” The advantage of laser over a welding gun, Germann explains, is the saving on take times. “The gun goes to the welding point, makes the weld, moves away from the point, then moves again… With the laser, it makes one line. Maybe there is another part for which we need to change the depth, and it only requires one action. So it’s quicker than the series of moves needed by the welding gun, going up, going down and so on.”

Another benefit Germann cites is the finished appearance of the weld. “We must also consider the paintshop. If we don’t use the laser, then there will be times when we have to use glue on the structure of the car. Then you need a plastic part – produced, supplied, fitted and painted… you have to look at the whole process,” he says.

“Quality and responsibility, progress and innovation, that’s our spirit.” Germann explains. That spirit, along with the long partnership between the carmakers, is celebrated in a centrepiece sculpture at the Changchun complex, 'Ode to Audi' by Gerry Judah. It comprises four 20-metre beams, criss-crossed and fixed to the top is an A6L – the one-millionth Audi model built at the site – high above the lawns near the main gate. It is the achievement of a quarter century, held aloft for all to see.