All hail the new taxi

Combining ingenuity, a bold export plan and a government grant, Geely has launched an all-new LTC electric taxi manufactured at a purpose-built factory

How do you build a niche, low-volume car like the London black cab and make it profitable? That was the conundrum facing the Zhejiang Geely Holding Group when it started developing the all-new taxi that’s set for launch at the end of the year, to be built in a brand-new plant in Coventry, England.

The size of the task facing the London Taxi Company, as it’s now known, was even more mountainous given that London regulations stipulate that all new black cabs registered after January 1st, 2018 need to be zero-emission capable. That meant replacing the trusty, if smoky, diesel engine with arguably the world’s second-most expensive powertrain combination after fuel cells: electric, with a range-extender combustion engine.

How Geely has approached this is fascinating, and involves a combination of good old British ingenuity, liberal use of Geely’s (or more specifically, Volvo’s) existing supply chain network, a bold export plan and a fat grant from the UK Government to get the factory built.

Geely saved the London Taxi Company (previously London Taxis International) when it bought the bankrupt parent firm back in 2013. LTI had been building cabs at a rate of around 3,500 a year at its factory in Coventry’s Holyhead Road.,This had been the home of the London black cab since 1948 but, as an investor since 2007, Geely had moved production to China and from 2010 was importing kits for the Coventry plant to assemble.

A purpose-built plant for the new taxiThe old plant, which is close to the centre of Coventry, wouldn’t be suitable to build the high-tech, clean TX5, so LTC constructed a new, 37,000 sq.m facility with a capacity of 24,000 a year on the outskirts of the city in a new industrial park not far from the village of Ansty. In total, LTC reckons it has spent £325m ($415m) on the plant and developing the vehicle range, which next year will also include an urban delivery van off the same platform.

The investment sum sounds cheap – and it is, partly because of the clever way the new TX5 has been constructed. Instead of a body-on-frame chassis, the new cab is built around lightweight bonded extruded aluminium monocoque, much the same system used by Lotus and Aston Martin to build their cars.

Aluminium is around three times as expensive as mild steel, according to metal parts supplier Gestamp (not the supplier here), but it’s also half the weight and LTC says that was crucial to increase the battery range and ensure the cabbie doesn’t spend too much fuelling the 1.5-litre range extender engine. “It is not a cheap vehicle. The trick for us is to be able to make it cost-competitive for the owner,” says Carl-Peter Forster, LTC chairman and board member for Geely.

The LTC plant at Ansty near Coventry, UK, will eventually employ around 1,000 workers

The other useful thing about the bonded aluminium structure is that it can be put together in a factory bodyshop that requires far less investment than a standard bodyshop – LTC’s cost just £30m, according to Forster (see more in the interview). The low factory investment, helped along by £16m from the Government’s Regional Growth Fund, is key to making the whole project work.

“In order to make this a commercially viable undertaking we had to lower the break-even point. I won’t give you a number but it’s very low,” states Forster.

Volvo supply helpThe aluminium for the body is sourced in the UK, and Philip Bracken, purchasing manager for LTC, says this is a big part of the 32% UK localisation rate by value. The supplier is aluminium specialist Sapa Group, which also anodises the metal in the UK. The next biggest UK-supplied parts are the SMC (sheet moulding compound) plastic composite body panels, which LTC paints in its old Holyhead Road plant for the moment.

Of the rest of the parts for the TX5, 32% come from Europe and 32% from China, with the remaining four per cent from the US.

What’s surprising is how many of the parts are shared with modern Volvos, given it is a premium brand. ‘Shared’ is the key word here. “Nothing comes from Volvo themselves, but what they’ve done is given us advice about suppliers they use for their parts,” Bracken told us. The advantage is cheaper prices than if LTC had gone to suppliers independently, Bracken says.

The 33kwh battery pack is sourced from Volvo supplier LG Chem, and the electric motor is from Siemens. Both are used in Volvo’s plug-in hybrid vehicles. The engine is Volvo’s new three-cylinder turbocharged petrol unit, sourced from a Geely factory in China. The taxi also uses Volvo electronics, switchgear, dash screen, and likely the whole rear axle with its transverse composite leaf spring (although that wasn’t confirmed).

What a low-investment factory looks likeThe £30m bodyshop is operated almost at clean-room levels, and represents the heart of the Ansty operation. The monocoque structure is assembled in five different sections, each with its own sub-assembly area. The aluminium parts are loaded onto jigs; robots then apply the glue. The whole process is around 50% automated.

The parts are then riveted together so they don’t shift ahead of the baking. Before moving into one of four ovens, the sections are assembled in a framing jig to create the finished body. The baking process requires roughly 20 minutes at 180°C. This will be a future bottleneck should LTC’s plans for export come good and demand exceeds 24,000 a year. The assembly hall can manage 36,000, we were told. 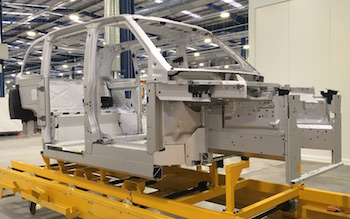 The TX5 is built around lightweight bonded extruded aluminium monocoque, similar to one used by Lotus and Aston Martin

The assembly line is more conventional and much less automated than the bodyshop. AMS saw it in action at a reduced pace as employees assembled validation prototypes ahead of the launch, with very little help from robots. There’s just one in assembly, which applies glue to the windows before they are manually fitted to the car.

“We don’t use a robot to fit them because of our volumes. It’s about using automation intelligently where it gives us a quality improvement,” says manufacturing engineering manager Pete Baynton, who came from Caterpillar late last year, but gained knowledge of bonded aluminium in a previous role at Lotus. At full production, LTC will employ 1,000 staff, but currently 60-70 of its 400 workers are in vehicle production, Baynton estimates. Some came over from Holyhead Road, but the old plant had been working with a skeleton staff.

From the bodyshop, the taxis travel the pre-trim section dangling from an electric monorail system before being loaded onto AGVs, which follow a line on the factory floor, to be fitted with dashboards and doors. Then it’s back to the monorail to marry up the engine, battery and axles before the car heads off to trim assembly along a moving belt embedded in the floor. All parts are delivered by electric ‘tow-trains’ with up six trucks loaded from the parts store under the same roof. Aside from those loading the trains, the assembly area is free from forklifts.

Geely will also make a similar vehicle in a new factory in China, which the company has just started building, Forster says. The design of the taxi itself is a sensible evolution of the one that’s gone before, but that’s the extent of the continuation. “This is unique,” CEO Chris Gubbey said at the opening of the plant in March. “New plant, new product, new business process, new markets, new team. It doesn’t exist anywhere else.” 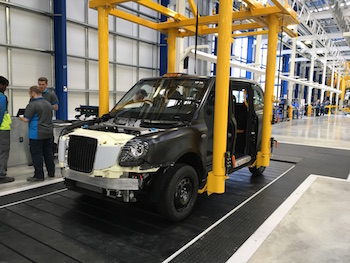 How did you end up choosing a bonded aluminium structure?When the [Geely] chairman Li Shufu bought the company early 2013, it had one engineer. Clearly that was not enough. So, I suggested we had to bring in know-how. I was introduced to an engineering company called Emerald Automotive [headed by former Lotus commercial director Andy Tempest] and they had developed a prototype of a light commercial, electrified range-extended vehicle and were quite keen to industrialise it. So, I said ‘we’ll buy your company, welcome aboard’. So Emerald is a sister company, basically the engineering arm of LTC.

How did Emerald manage to convince you it would work?We did half a year of conceptual work. Then we said “in 11 months, on November 31st, 2014, you will deliver two fully engineered, running demonstrators using all the bits and pieces available from the Geely Group. It was the acid test. The curtain opened and the demonstrator rolled in and it looked good; you would not recognise the difference from now.

How do you square the price of aluminium and electric powertrain?This is not a cheap vehicle. The trick is for us to be able to make it cost competitive for the driver and cheaper than the existing TX4. If you use no petrol you save £500 a month.

What part does the factory play in that?We have to build volume over time so the trick is we have to have a low break-even. £325m – £50m for the factory – sounds like a lot, but that would never get you anywhere with a traditional set-up. To get a decent steel body and paintshop with all the tooling costs £400m. We did it for £50m, including pressing plastic panels.