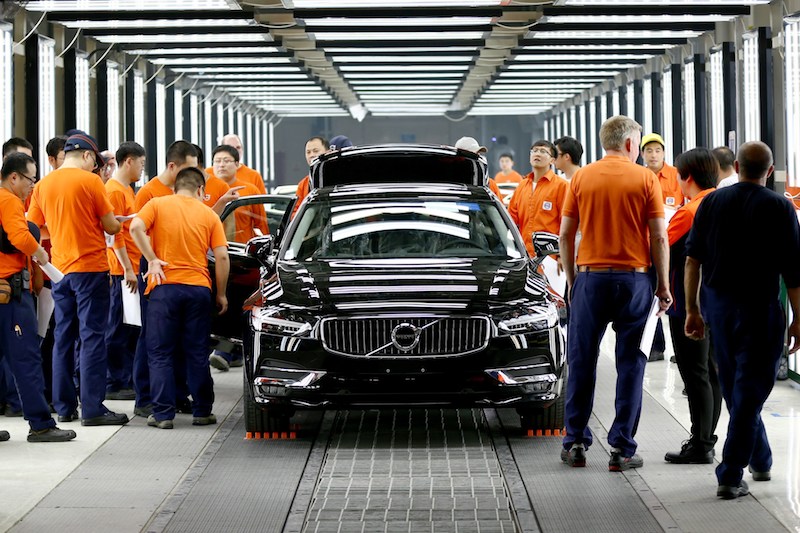 Ford had owned Swedish carmaker since 1999, but had never been able to integrate it into the rest of its operations. Nonetheless, when Geely bought Volvo it found a company full of new ideas and plans which it had been unable to implement as part of the Ford operation. Freed of Ford’s overarching bureaucracy, Volvo has been transformed and is poised to become a major threat to the German premium brands in particular. It also has an owner that is committed to growth while also challenging the established automotive world order. Volvo currently employs around 38,000 people globally and sold nearly 572,000 vehicles in 2017. It has a global share of less than 2% but arguably has a brand name with a more substantial awareness and market presence than its small share would suggest.

Its two principal production bases for many years have been Torslanda, near Gothenburg in Sweden, and Ghent in Belgium. However, since the takeover by Geely it has established an all-new production network in China and will soon open its first factory in the US, in Charleston, South Carolina. China now represents the OEM’s largest single market, accounting for around 20% of its sales, followed by the US (14%), Sweden (13%), the UK (8%) and Germany (7%).

Almost all Volvo vehicles are now made on one of two platforms: Compact Modular Architecture (CMA), which forms the basis of the new XC40 and forthcoming V40 and S40, and Scalable Platform Architecture (SPA), which is used for the new 90 series (XC90, V90 and S90) and is gradually being applied to the 60 series (XC60, V60 and S60) as older models based on Ford platforms are replaced. Geely models, notably those sold under the new Lynk & Co brand, will also use the CMA platform, which was developed jointly between Volvo and Geely engineers working in Gothenburg.

Production of the XC40 began at the Ghent plant in November 2017, which has seen heavy investment to boost production of CMA vehicles

Volvo is developing a global production network. In Gothenburg it currently makes the XC90, V90, XC60 and V60, all on the SPA platform. Supporting the Gothenburg plant is an engine plant at Skövde and a body pressings plant at Olofström, in central Sweden. The engine and body part plants also supply the Ghent plant in Belgium, which is transitioning to the CMA platform; currently some S60 production (using an old Ford platform) still takes place there but this will soon end when production of the new S60 begins in the US and China.

Production of the first CMA model, the XC40 compact SUV, began in November 2017. Volvo has invested heavily its Ghent plant to make CMA models, including adding 8,000 sq.m to the bodyshop, where 363 new robots have been installed. One of the robots is known as ‘The Beast’ - it is said to be unique with Volvo’s global operations, and is used to lift and lower car bodies onto a conveyor belt running just below the factory’s ceiling

Vehicle production outside Europe began in earnest during 2013 when Volvo opened a plant in Chengdu, concentrating on the old S60 and the XC60, mainly for the local market. A long-wheel-base version of the S60, S60L, has also been exported to the US, but this arrangement will end when the US plant opens. A second Chinese plant, at Daqing, opened in 2014. Initially this made a China market-only version of the original XC90 (sold as XC Classic) but this has since switched to SPA models, starting with the S90. In fact, Daqing is now the sole global supply point for the S90, with exports to Europe arriving by rail, having travelled through China, Russia and eastern Europe in purpose-built wagons. The rail route has cut transport times for European deliveries by two-thirds compared to sea transport. A third vehicle plant, at Luqiao (350km south of Shanghai), will make the 40 series models, along with Lynk & Co models. In addition, there is a Chinese engine plant at Zhangjiakou.

Finally, in terms of full manufacturing operations, the new plant will open in the second half of 2018 in South Carolina, making the S60 initially, but ultimately also the XC60 and the replacement for the current XC90, from 2021. Total investment committed to date in the US now totals over $1.1 billion and the plant will employ 2,000 staff when it starts production, with a similar number of jobs to be added for the XC90 programme. The US plant will have a production capacity of 150,000 per year and is expected to export at least one-third of this output, with the exact number depending on the final model and variant allocation for the 60- and 90-series programmes between the US, China and Sweden.

The uncertain tariff and trading regime, which President Trump is threatening at present, could cause Volvo to review what it makes where and so the eventual manufacturing line-up in the US is subject to change. When the original investment was announced, production was due to be at a rate of 60,000 a year, with 60% for export, but with the decision made to transfer the XC90 to the US, the company has bigger ambitions for this plant.

In addition to these full manufacturing operations, Volvo has had a low volume assembly operation in Malaysia for some years; and in May 2017, it announced construction of an assembly facility in India. This will be located in Bangalore, and will start operations by assembling the XC90. Volume plans have not been disclosed.

In July 2017, Volvo said all its new vehicles would be electrified by 2020, by which it meant that all-new vehicles would include some level of electrification. In Europe the new V60 has been launched with two plug-in hybrid options, namely the T6 diesel hybrid and T8 hybrid gasoline twin engine systems.

Existing models with conventional diesel and petrol powertrains will continue to be sold until the end of their normal life cycles, or when they are banned from sale. Volvo does not actually expect to have a fully electrified line-up, with no conventional powertrain vehicles on sale, until 2029 at the earliest. Like other car companies (Mercedes with EQ, Audi with e-tron and others), Volvo has decided to sell its electrified vehicles with a sub-brand, in this case Polestar, a name hitherto used by Volvo for its high-performance models. Launching Polestar in December 2017, Volvo specifically targeted BMW’s i and Tesla electric brands. By 2025, the company expects to have sold 1m electrified vehicles worldwide.

Volvo has also announced that it will make its first all-electric car, the Polestar 2, in China from 2018. It will be based on the CMA platform and will likely be made at the Luqiao plant. The hybrid Polestar 1 will be made in Chengdu from 2019. This will be a limited-edition model, however, and will initially be made at a rate of only 500 a year. The low volume reflects the technical challenge which Volvo faces with its chosen design, namely a carbon-fibre body that will be bonded on to a shortened version of the S90’s SPA steel platform. A larger model, aimed at challenging the Tesla Model X, will appear in 2021 and will be called Polestar 4

As well as promoting its environmental credentials by committing to electrifying all its vehicles during the coming years, Volvo has turned to improving the environmental performance of its manufacturing operations. The engine plant at Skövde, in central Sweden, is the company’s first climate-neutral production facility. It switched to using renewable heating on January 1, 2018 and it plans to make all its factories climate-neutral by 2025.

Having led the world in safety technology for many years (it was among the first car companies to fit airbags), Volvo was naturally at the forefront of the emerging market for autonomous vehicles. In November 2017, it agreed a deal with Uber to develop a self-driving taxi, based on the XC90. The plan was to produce 24,000 such vehicles, but this programme is on hold following the death in Arizona of a cyclist in a collision with one of the autonomous XC90s on test. The initial reaction to this accident has been for several car companies to suspend their autonomous vehicle programmes, but – at the time of writing – Volvo has been remarkably silent on the matter. The company was not planning to launch fully autonomous vehicles until 2021, but this plan will now likely be revised. The potential delay may hit Volvo and its suppliers - the autonomous technology for the Uber vehicles has been developed through a joint venture between Volvo and Autoliv called Zenuity.

In June 2017, Volvo also announced that it would use Nvidia’s Drive PX platform to bring AI-enabled automonous vehicles to market by 2021. Hakan Samuelsson, president and chief executive of Volvo Cars, commented: “Our cooperation with Nvidia places Volvo Cars, Autoliv and Zenuity at the forefront of the fast-moving market to develop next-generation autonomous driving capabilities and will speed up the development of Volvo’s own commercially available autonomous drive cars.” 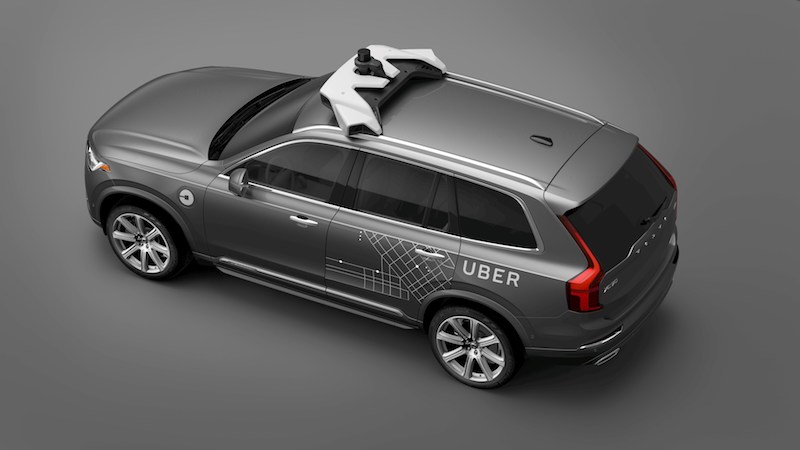 Volvo’s owner, Geely, is nothing if not ambitious and has established a new brand, Lynk & Co, to boost its growth, especially outside China. Initially, Lynk & Co models will be launched in that country, but within two years they will also be sold in Europe and the US (see p24-25).

Volvo, along with Lynk & Co, intends to shake up how vehicles are sold. For example, both Polestar models and the new XC40 will be offered to customers on subscription basis. Customers will not buy the cars outright but will instead have them on a two- or three-year subscription basis. There will be no down payment, as in a lease programme, and there is also no balloon payment at the end the subscription period. Most ‘purchases’ will be carried out online. Servicing and insurance will fall within a flat monthly fee, and at the end of the subscription period, Polestar will collect the vehicle and allow customers to choose another Polestar or Volvo model.

Turning the traditional sales model on its head risks creating a massive contingent liability for the company, as it is unlikely that the true cost of a vehicle can be wholly recouped through a two- or three-year subscription system. Therefore, Volvo will need to find a means to dispose of an increasing number of two- or three-year old models in order to keep the scheme – and production lines – running.

This ambitious idea, which will also be adopted by Lynk & Co, may be revolutionary, but it is certainly not without its risks.