Bodyshop of the future

In order to turn its bestselling F-150 into an aluminium vehicle, Ford first had to transform the bodyshop 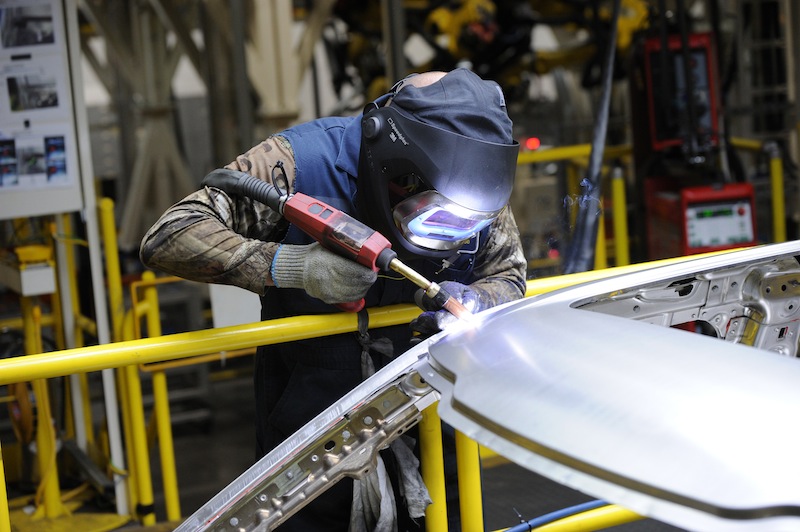 "It’s extremely quiet, it’s clean, it’s small” – this seems like a modest description for the home of the automotive manufacturing innovation that has perhaps caused more noise than any other over the past few years. But if anyone knows the truth about the new F-150 bodyshop at Ford Dearborn, it is Ron Ketelhut, the chief body construction engineer who masterminded the renovation of the old facility for the aluminium 2015 model – a turnaround that was achieved in just four weeks.

Ketelhut says it was the “most challenging” project Ford has ever taken on, owing to the short time period available, the need to develop and validate the technology involved, and the required high output for the bestselling F-150. “It’s such a significant, iconic vehicle for the company, you just couldn’t let anybody down,” he explains.

The quietness, cleanliness and relatively small size of the two-level, 780,000 sq.ft bodyshop are directly related to the type of technology used to make the aluminium bodies of the pick-up trucks; in place of traditional spot-welding robots, there are 500 machines for self-pierce riveting, flow-drill screwdriving, clinching and the application of adhesives, plus laser welding.

The aluminium body of the new F-150 is joined by 2,500 rivets in place of the 5,000 spot welds used on the previous model
Suppliers to the new bodyshop include:
– Fanuc for the six-axis robots
– Henrob for the self-piercing rivets and equipment
– Weber Screwdriving Systems for the screwdriving machines
– Semblex for the flow-drill screws
– Dow Automotive Systems for the structural and glass-bonding adhesives
– TOX-Pressotechnik for the clinching tools
– Comau for system integration
– Perceptron for dimensional gauging and inspection
– Alcoa and Novelis for the aluminium (800-900m pounds per year; four alloys, two grades – 5000 series for structural parts, 6000 series for the outer skin).

In the new method of F-150 production, around 2,500 rivets are applied per vehicle, compared with 5,000 spot welds on the 2014 model. Avoiding the need for a pre-drilled or pre-punched hole, the rivet makes its own aperture upon insertion; the piercing and fastening are completed in the same operation.

Flow-drill screws are used on a much smaller proportion of the joins, around 15%, in instances where access is limited. Also self-piercing, each screw simultaneously penetrates and joins two to four sheets of aluminium; its high-speed, sharp tip heats up and pushes the metal aside. The more traditional method of clinching is used for the closures, underbodies, framing and sidebodies, while laser welding is applied to the roofs (after initial riveting). More than 350 feet of structural adhesive per body supplements the rivets and screws.

Error-proofing is essential
While the majority of material handling is performed by automated guided vehicles, the rivets are delivered to the robot cells by some of the 500-strong workforce, usually every six hours. Multiple sizes of rivets are used and certain stations require more than one type, so Ford has been careful to error-proof the process; in the case of the rivet hoppers situated at the side of the cell, the flap on the container will not open if it is the wrong type, while a robot receiving an incorrect rivet reel will automatically shut down. The six-axis robots are mounted overhead, enabling easier access and maintenance.

Owing to the light weight of the aluminium bodies, Ford has also been able to streamline the associated equipment. The 22-ton ‘Godzilla’ robot previously used to lift the steel pick-ups weighing up to 2,700lbs has been reduced to a one-ton ‘Baby Godzilla’ capable of lifting 2,000lbs. Metal parts can even be picked up by hand without lift assists.

In fact, the level of automation in the new bodyshop is actually only about 10% higher than in the old facility, according to Ketelhut, who says this is mostly due to increased robotic loading. The body-building stages and the number of workstations are the same, and even the manufacturing processes themselves are not new, having been used before by Ford and other OEMs (including for the bonnet of the 2014 F-150). It is the scale of the application which is pioneering; for the 2015 model, only the dashboard structure and some small brackets are made from steel.

Furthermore, unlike previous applications, the F-series pick-up truck is not a niche, premium vehicle (such as Jaguar’s XE) but a high-volume product and the topselling vehicle in America for the past 33 years. From its launch in November last year, the bodyshop has now ramped up to 60 jobs per hour and is producing more than 1,200 units per day. Other OEMs are bound to be watching with interest.

The result of the recent renovation is not only a product which is 700lb lighter than the preceding steel version (with fuel savings of 5-29%, depending on the engine) but a bodyshop that is more environmentally friendly, consuming 30% less energy than before, using no water, and generating no exhaust from welding. Ford has also invested in recycling equipment in the stamping plant which can separate the scrap according to both grade and supplier, meaning that 100% of it can re-enter the manufacturing system. Asked whether the F-150 bodyshop might become a blueprint for other production facilities, Ketelhut seems confident: “This is absolutely a model for the future, and I think you’ll see it in future too.”