Anton Heiss, senior vice-president for Technology and Manufacturing, discusses BMW’s manufacturing success in China, where its Tiexi complex can be considered a production benchmark 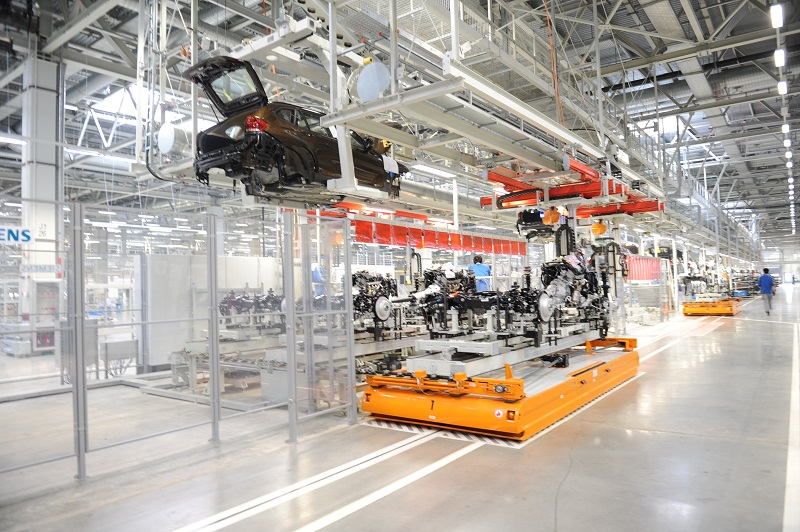 AMS: It has been stated that Tiexi is the most sustainable vehicle manufacturing plant in China. Is the plant used as a manufacturing benchmark in the region?

Anton Heiss (AH): You can compare BMW Tiexi in the global network context. It’s the newest plant and we have put a lot of development from BMW, and effort, into sustainability. In this region, we have very hot summers and extremely cold winters, so the buildings here [at the plant] are designed with very efficient heating and cooling systems to save energy.

Also, looking at the production equipment, we have two high-speed servo press lines that feature an energy recovery system and are much more efficient than the hydraulic type. Using this technology, there is an energy saving of around 60% per stroke. In the bodyshop, we use heat energy recovered from cooling the welding robots to heat the area, and in our paintshop we use a RoDip process which rotates the body of the vehicle through the pre-treatment bath; this saves both energy and space in the paintshop.

Anton Heiss, senior vice-president Technology and Manufacturing, BMW Brilliance Automotive
For painting the car bodies, we use the IPP system which removes a paint stage from the process. This system integrates the first and second paint layer without the need to heat the body in between; this saves both energy and materials, and decreases the cycle-time, increasing throughput. We also have the latest technology to recover and recycle the clear-coat overspray.

In our assembly area, we recycle 90% of the wastewater that is used for testing and cooling operations. We have also made big savings in energy and water usage in the main office block. So, we have utilised every measure for sustainable production that’s available in the BMW network and that has made Tiexi a benchmark plant.

AMS: You currently produce the 3- and 5-Series, plus the X1, in Shenyang. Will you add any new models or platforms to this plant in the near future?

AH: We plan to introduce another three models in the next two years. One will be an entry-level car set below the 3-Series that will be specially designed for the China market; another will be a high-functionality car that combines usability and typical BMW dynamics, aiming at the family-car market; and then we will also build a variant of the X3.

AH: The major challenges come from the speed of growth here in China. If you compare production in 2009 to last year’s figures, we produce six times more vehicles. That’s a big increase in just five years. Even if you just compare 2013 to 2014 there was a 30% increase in output. It is a big challenge even to set up high-volume production facilities, but that isn’t all that’s required – it might even be the easiest part. As well as the equipment, you need to hire and train a lot people and this has probably been the biggest challenge. 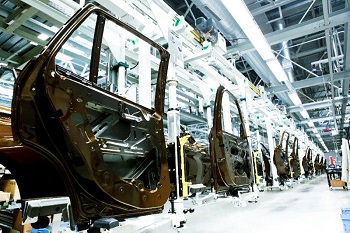 BMW works closely with suppliers to ensure sequenced parts delivery and maintains a short supply chain
Our highest priority is quality and this doesn't just come from machines; it also comes from the people. So we put a lot of effort into training the workforce; typically we have six weeks training off the job, then ongoing once the workers begin operations.

Another big challenge is ensuring our supply chain can cope with the volume increases. We currently have over 280 suppliers and if our volumes increase by 30% then all of these companies have to increase their volumes to match the demand. If one [supplier] fails then it can stop production, so this is an important challenge. So our biggest challenges are to ensure the quality of our workforce, equipment and supply chain, and these are driven by the speed of growth.

AMS: Do you find you have a high turnover of staff, given the level of competition for skilled workers in the Chinese automotive sector?

AH: No. We are very proud of the fact that our staff turnover is well below the average for the Chinese automotive sector. The reason for this is that BMW Brilliance Automotive (BBA) is an attractive place to work. It’s a new, modern plant and we offer training, a competitive salary and, because of the high growth here, people can experience a rapid advancement into supervisory and management roles.

"We have utilised every measure for sustainable production that’s available in the BMW network and that has made Tiexi a benchmark plant" – Anton Heiss, BMW

AMS: You talked about the challenge for your suppliers to keep pace with rapidly increasing volumes, so how lean is your operation here in Shenyang?

AH:  As I mentioned before, we have more than 280 suppliers here in China but more than 75% of our parts are supplied from within this province. We work very closely with our suppliers to ensure they produce and deliver the parts in the same sequence as we are building the cars. So we have a very short supply chain, perhaps a maximum of 1.5 hour’s drive to this plant.

There is a lot of new construction going on in this area and this is mainly for new supplier operations. So while we don’t choose to have suppliers locate on our site, as we like to have some flexibility as to who we work with, we do encourage them to locate in this area.

AMS: What levels of automation do you have at Tiexi?

AH: The bodyshop is the most automated area, at about 95%. The paintshop is also highly automated and assembly has, as is common, the lowest level of automation. The amount of automation here is comparable with other BMW plants outside of China.

We are very focused on being as flexible as possible in production, so we always try to avoid having dedicated lines. For example, here our assembly line builds all models, and adding automation increases complexity and can limit the ability to be flexible.

We can also be flexible with the working hours. So currently we run two shifts, six days a week, but we can adjust the hours worked on a daily basis from eight to nine hours, or even up to ten hours if needed. Then you have the flexibility in the number of days worked, for example increasing from five to six days a week. And then you can add shifts if needed, so we have a lot of flexibility built-in to meet changing demand.

AMS: What is the current level of local content in the vehicles produced at Tiexi?

AH: There are three important pillars to the localisation of a vehicle. The first is deciding which models to build locally rather than import, which is a big step, and as I mentioned previously, we are going to build three new models here in the next few years, doubling the number of locally built models.

The second is deciding how much of the vehicle content you want to produce in-house. For example, five years ago we imported all our engines from Europe, and then we set up a small operation in Shenyang to begin assembly of engines and the machining of crank shafts, but still imported a large number of parts. Now we are establishing a new engine plant which will include a foundry – the first outside of Germany for BMW – and perform all machining and assembly operations.

The third pillar is creating a high-quality supplier network. There are two routes for this, the first being to attract overseas suppliers that we have worked with in other locations to come to Shenyang. The second, which we increasingly use, is to qualify local Chinese suppliers. We have already done over 100 projects with local suppliers and I have been very impressed with the rate of progress and quality of parts being supplied to BBA.

AMS: Are you pursuing a ‘build where you sell’ strategy and is any of the production volume, including powertrain, for export? 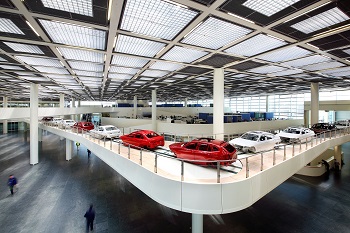 Painted bodies transferred to assembly via the main office building
BMW has established its manufacturing operations in China near the north eastern city of Shenyang. There are two plants here, and AMS visited the newest facility at Tiexi, which is currently building the X1 and 3-Series (both standard and long-wheelbase versions). Construction on the huge site began in 2010, with production starting in 2012, and it now covers 2 sq.km and employs more than 6,000 people. For the layout of the plant, BMW has pursued a concept of placing all production operations under a single roof, the paintshop being the exception to this as it required operations to be isolated from the main production area to avoid contamination.

As you enter the main building, two things make an immediate impression: the size of the facility (it’s huge) and the conveyor system transferring painted car bodies to the assembly area via the main building reception area. But this is no design gimmick; the facility makes efficient use of all the space and the most direct way to get the vehicles from the paintshop to final assembly is through the reception area.

Tiexi has a full range of manufacturing operations; the press shop has two high-speed Schuler servo press lines featuring five-stage and six-stage presses, capable of 17 strokes per minute. There is also a Schuler blanking line. The current bodyshop is operating at 30 jobs per hour (jph) and uses 642 ABB robots, but both this area and the paintshop are due to be expanded, and the new bodyshop will house over 1,000 robots and production will be ramped up to 60jph. 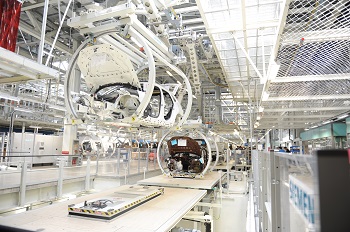 An overhead conveyor system supports each body in a rotating cradle that can position the vehicle to optimise the ergonomics
The main body line splits at the final stage as the fixturing for the door hinges on the 3-Series and X1 differs (one is welded, the other bolted to the body). Bodies are selected at random from each batch produced and checked in the temperature-controlled CMM room. There the Ziess equipment checks the accuracy of the body-in-white. Tiexi also uses laser-welding cells for roof and tailgate sections. From here, the bodies are transferred to the paintshop.

Final assembly at Tiexi shares the same line and workstation configuration as BMW’s Leipzig plant, with a 'six-finger’ layout of subassembly lines feeding the main line with powertrains, doors, interiors, front-end assemblies and dashboards. The painted bodies move along the line via a Siemens overhead conveyor system. This supports each body in a rotating cradle which positions the vehicle to optimise the ergonomics, improving the efficiency of each assembly operation. Certain assemblies, such as the front-ends and powertrains are delivered to the lines on AGVs.