Little attention is paid to the humble PTFE bearing, but this small part can affect assembly and performance

The hinges on doors, bonnets and other car-body closures seem at first to be among the most straightforward elements of the componentry on any vehicle. But, as is often the case, the appearance of simplicity can disguise a surprising amount of technical sophistication. Such is the case with bearings produced by Saint Gobain at its factory in Willich, Germany, under the name Norglide. The products are not conventional ball or roller bearings at all. Instead, they comprise two concentric rings of material – an inner ring of polytetrafluoroethylene (PTFE) polymer with a backing of an outer metal ring made from steel, stainless steel or aluminium with possibly an intermediate layer that may be a mesh of aluminium, again, bronze or some other metal.

These details are confirmed by Mirko Hundertmark, Saint Gobain’s global market manager – automotive interior, based at Willich. He says that the automotive sector is the biggest market for the products, which are usually sold to tier-one and tier-two suppliers rather than vehicle-makers. “We are a component supplier,” he states. R&D activities are distributed globally and take place in Europe, the US and Asia. Collaboration with customers in product development is, Hundertmark indicates, a constant objective, but he admits that it does not yet take place to the extent that the company would like.

A lot of automotive-related companies, he states bluntly, simply “do not appreciate” the advantages that could accrue to them from collaboration with Saint Gobain at the earliest stages of their own projects. A tendency to regard bearings as simple items with little implication for final product quality and performance when incorporated in assemblies seems a likely factor. But Hundertmark is adamant that the deficiency represents a missed opportunity to effect improvements in both in-vehicle performance and assembly procedures during manufacturing. “The sooner we are involved, the better we can make both of those things,” he argues.

As far as assembly procedures are concerned, Hundertmark says that even componentry as apparently straightforward as closure hinges can have implications for overall efficiency. One instance he cites is the need for an inherent robustness simply to cope with the fact that a door may be attached, then removed, then reattached during the assembly process to allow first for painting and then its own fitting out with internal mechanisms and trim.

Tuned for conductivityMoreover, vehicle painting – a process with obvious relevance to perceived quality and purchaser decision-making – is also one in which basic componentry can play a surprisingly influential role. Hundertmark explains that a crucial requirement is that there should be no anomalies in the flow of electric current through the car body used to help ensure consistent paint adhesion, but that component parts can cause localised variations in resistance that have precisely such an effect.

In order to counter this, Hundertmark says, the conductivity of the Norglide bearings can be varied by adding different fillers to the inner PTFE ring. “We can tune our material non-conductive or conductive,” he states, adding that even “extreme conductivity” can be provided if required. Furthermore, adding “notches” to the parts can also increase their conductivity. But that situation can become complex, because in some circumstances the requirement is that hinges be conductive on one side and non-conductive on the other. “There must be no conductivity in the contact areas of the pivot points,” he states, explaining that it is necessary to avoid creating “paint bridges” in those regions that would subsequently break off when the hinges were moved, thereby compromising paint finish quality. He says the company offers a non-conductive PTFE liner material called LR. He adds that, although the product is not particularly new, there are still distinct “regional variations” in its uptake.

"The sooner we are involved, the better we can make both in-vehicle performance and assembly procedures"– Mirko Hundertmark, Saint Gobain

Anti-corrosive propertiesA much newer product is a range of bearings that feature a predominantly steel outer ring with a thin aluminium coating on its exterior surface. The purpose, Hundertmark explains, is to counter the potential for corrosion that can occur when a purely steel ring is used in an aluminium car body – the latter, of course, being an increasingly likely possibility as OEMs continue their lightweighting efforts. This is effected by the aluminium coating acting as a cathode. What the innovation does in such circumstances, he states, is to negate that potential without compromising the load-bearing capability and hence actual mechanical performance of the hinge.

The company is confident that the products will deliver on their anti-corrosion promise. It states that ISO-certified testing has demonstrated high resistance to corrosion even in extreme salt and moisture conditions. For instance, after 1,000 hours of exposure to salt spray when housed in galvanised steel or aluminium housings, the bearings are claimed to have displayed absolutely no red rust. More pertinently from a production point-of-view, Hundertmark states that assembly procedures using the new product will not need to differ in any way from those employed with previous products. Specifically, they do not require any special handling techniques in order to preserve the coating during assembly.

“That was a deliberate objective,” he confirms, adding that the whole range of products are equally applicable to assembly operations involving manual, semi-automatic and completely automated procedures. The choice, he says, is “entirely a matter for the customer, based on production volume considerations”. The product is, in fact, so new – only formally introduced to the market last November – that it has yet to acquire its first application. Nonetheless, Hundertmark confirms that the company is in negotiations with a number of potential users. Without going into details, he expects some kind of development over the next year or two.

Added assembly benefitsHundertmark says that there are various factors relating to the company's products that influence the ease or otherwise of assembly operations involving them. One is to manipulate the geometry of the parts to help customers to avoid any need for a secondary flanging operation to fix them in place. Increasing the thickness of the steel backing ring, for instance, can enable them to be press-fitted. Tweaking the geometry of the bearings can also help to create a much wider tolerance range in the larger and more expensive vehicle part to which they are attached.

Hundertmark says that another attribute of the bearings can also prove useful inside the car – both in use and during the assembly of headrests. He explains that the parts used to make the mechanism for adjusting the height of a headrest can create problems in manufacturing because of tolerance and misalignment issues in the metal headrest frame and the posts up and down which it moves, resulting from the bending process used to fabricate them. 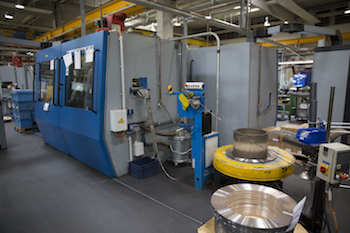 A forming machine at Saint Gobain. Bearings are not as simple as they look, and can impact on larger components

This means that the fixture does not mate well with the plastic guide sleeves in the adjustment mechanism because the type of plastic material habitually used in such an application is unforgiving of deviations from a very narrow tolerance range. The consequence is a need for inappropriately high adjustment forces. This has led to an obvious solution: the use of lubricants to facilitate ease of operation of the mechanism. However, that can also be problematic, because of the possibility of contamination of other elements of the vehicle interior during assembly operations, which in turn would effectively make the vehicle unfit for sale.

But now, says Hundertmark, Saint Gobain has developed a new PTFE formulation embodied in a material it calls TRS that he is confident will alleviate tolerance issues and avoid any need for the use of lubrication. He explains that the product derives from experience the company has built up from the application of tolerance rings – devices that act as an interface between overlapping shafts of different diameters, but which act to make those parts move in sympathy with or even not move at all relative to each other. A typical application, for instance, is to enable the locking of a steering column as an anti-theft measure.

In effect, Hundertmark continues, TRS merges that expertise with experience derived from the company's bearing-related activities, specifically the fact that PTFE is a self-lubricating material. It should therefore facilitate headrest mechanisms that combine the required ability to be fixed in place with an accompanying ease-of-adjustment without any need for the use of lubricants.

Hundermark adds that, as with the anti-corrosion bearings, the product is so new that the company is still introducing it to potential users. But the underlying principle that the product embodies – “tolerance relaxation with controllable forces” – is one that Saint Gobain is confident will find lots of other applications in the industry as well.